New species of Flat Bark Beetle (Cucujidae) from the Calabria Region of Italy.

The Cucujidae, or Flat Bark Beetles, are medium-sized (6-25 mm), brightly coloured, Beetles found living under tree-bark on every continent except Antarctica, but commonest in the temperate Northern Hemisphere. They are carnivorous, targeting mainly other Beetles, and have been observed to resort to cannibalism when no other food is available.


In a paper published in the journal ZooKeys on 30 July 2012, a team of scientists led by Teresa Bonacci of the Dipartimento di Ecologia at the Università della Calabria, describe a new species of Flat Bark Beetle discovered in the Calabria Region while carrying out a review of members of the genus Cucujus found in Europe.

The new species is named Cucujus tulliae, in honour of the late Tullia Zetto, an entomologist at the Dipartimento di Ecologia at the Università della Calabria who passed away in 2010. The Beetles were gathered as larvae under the bark of fallen Calabrian Pine and Silver Fir trees in the Sila National Park in Calabria, and raised in captivity. They took eight months to mature, passing undergoing six molts before reaching adulthood. They only survived when the temperature was kept bellow 20℃. The adults are bright red Beetles, with black limbs, 11.2-12.5 mm in length. The species appears to be highly endemic (i.e. has a very limited distribution), and is therefore considered to be Endangered under the terms of the IUCN Red List. 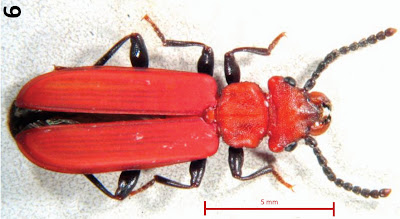