Coral Snakes are large, highly venomous, and often colourful Snakes, traits that tend to make sure that people notice them, even though they spend much of their time buried either in shallow burrows or in leaf litter. Unlike some other venomous Snakes, Coral Snakes do not tend to strike then withdraw and wait, but rather to hand on and try to work the venom in with a form of chewing motion. Fortunately their preferred prey is made up of small birds and mammals, and they will generally try to withdraw from any confrontation with humans.
In a paper published in the journal Zootaxa on 24 August 2012, a team of scientists led by Eric Smith of the Department of Biology at the University of Texas at Arlington describe a new species of Asian Coral Snake from the west of India.
The new species is named Calliophis castoe, in hounour of Todd Castoe, a noted herpetologist specialising in the study of snakes. The new species is named on the basis of modern specimens collected in Maharashtra and Goa States, as well as a specimen in the collection of the Bombay Natural History Society in the 1880s in Karnataka State and misidentified as Calliophis nigrescens (a species not found in Karnataka). 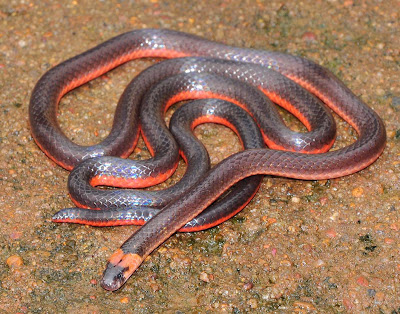 Calliophis castoe is a 536-540 mm brownish Snake; the underside is reddish, and a red stripe extends across the back of the head. The snake was found in semi-evergreen or evergreen forests with high annual precipitation at altitudes of up to 715 m. Local people in the areas where the study was carried out informed the researchers that the snakes were extremely common. 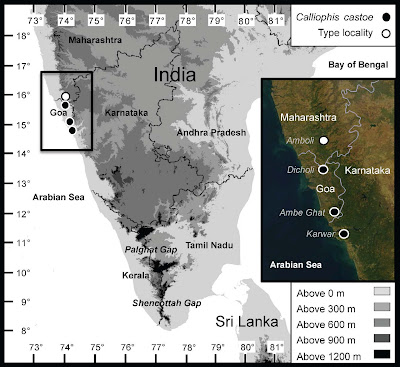 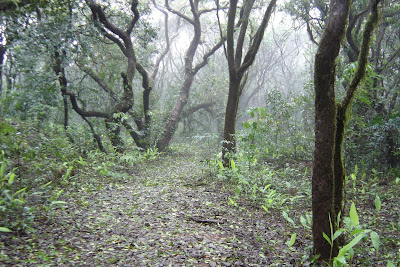 See also The Kandyan House Gecko; not extinct after all, Velvet Geckos and Broad-headed Snakes; understanding the population structure of a favoured prey item in order to protect an endangered predator, New species of Girdled Lizard from the Democratic Republic of Congo, New species of Semiaquatic Spectacled Lizard from southern Peru and Reptiles on Sciency Thoughts YouTube.