Main-Belt Comets are bodies bodies within the Main Asteroid Belt that occasionally produce tails similar to those of comets. Most comets have highly elliptical orbits and spend much of their time in the Outer Solar System, far from the influence of the Sun. When they make brief visits to the Inner Solar System frozen gasses at their surface are heated by the Sun and sublimate (pass directly from a solid to a gas, liquids do not usually exist in a vacuum), freeing dust particles that drift away from the comet and are then blown away by the Solar Winds (ionized particles and photons streaming out from the Sun, thus the tail of a comet always points away from the Sun, not back along the path of the comet as we would instinctively predict). Main-Belt Comets do not have such extreme orbits, but this does not mean their orbits are circular, they still get closer to and further from the Sun, and is is thought that some gasses are sublimating from them during their closer approaches, though this is open to dispute in the case of individual objects without repeat observations of the phenomena, which could be ejecting material as a result of a collision rather than solar heating.

In a paper published on the arXiv online database at Cornell University Library on 19 May 2013, a team of scientists led by Fernando Moreno of the Instituto de Astrofísica de Andalucía discus the results of a series of observations of the ejecta of Comet P/2012 T1 (PANSTARRS) made at Observatorio del Roque de los Muchachos on La Palma in the Canaries, between November 2012 and February 2013. 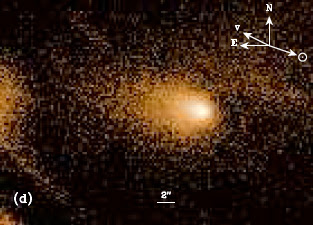 Based upon these observations Moreno et al. conclude that the ejection of material from Comet P/2012 T1 (PANSTARRS) was a sustained event lasting 4-6 months, inconsistent with a one-off event caused by a collision (the body has a period of 5.6 years); it was estimated that between 6 and 25 million kg of material was ejected, with particle sizes of up to 10 cm. The pattern of material ejecting from the object was compatible with grains being freed by the sublimation of gasses, though it was unclear whether this was a sudden event near the perihelion (closest point in a bodies orbit to the body which it is orbiting), or a more sustained event that began earlier in the orbit. The most likely source for the material was close to one of the poles (dubbed arbitrarily the south), which could be permanently in the sun at the time of the perihelion, as the poles of the Earth are around the solstices. 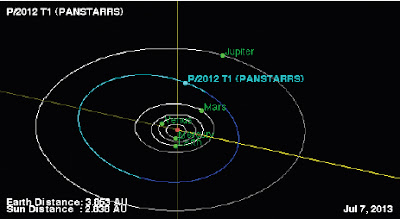