The perihelion of Comet 103P/Hartley 2.

Comet 103P/Hartley 2 is a Jupiter Family Comet (a comet with a period of less than 20 years with an orbit angled at less than 30° to the plane of the Solar System) with an orbit that it completes every 6.46 years, and which takes it from an aphelion (furthest point from the Sun) of 5.87 AU (i.e. 5.87 times as far from the Sun as the Earth, just outside the orbit of Jupiter) in to a perihelion of 1.05 AU (just outside the orbit of the Earth. The comet was by the Deep Impact Spacecraft, which came within 694 km of on November 4, 2010. This revealed the comet to have an unexpected 'peanut' shape with a distinct waist, and two distinct and separate sources of emissions, with a carbon dioxide rich jet being produced from the sunlit part of the comet, and a water-rich jet being emitted from the waist region, behavior which was quite unexpected. 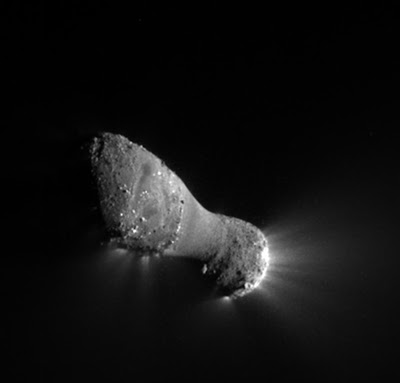 Like the Deep Impact Spacecraft, Lin et al. were able to observe two distinct jet features emitting from Comet 103P/Hartley 2, one of which pointed away from the Sun, the other towards it. Carbon dioxide and cyanide were detected in both jets, at a fairly typical ratio for comets of this type. The sunward jet was first observed in late September, and persisted into November. The sunward jet appeared more intense than the outward jet, but this may have been because it was also directed towards the Earth. The comet also produced significant quantities of dust, which appeared redder in the inward jet and bluer in the outward jet; this did not vary as the comet approached perihelion. 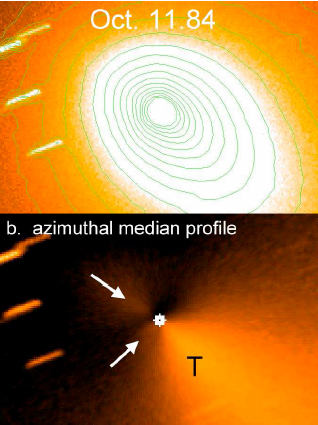 (Top) Image of comet 103P/Hartley 2 obtained on October 11, 2010 with R broadband filter, with a contour plot added to show light intensity. (Bottom) The same image with an azimuthal
median pro file added; the image is centered on the nucleus, the arrows point out the jets, T labels the tail, and the streaks are trailed stars. Lin et al. (2013).