Two new species of Scolecodont from the Early Devonian of the Ukraine.

Scolecodonts are the fossilized remains of the chitinous teeth and jaw elements of Polychaete Worms. They are described as species since preservation of entire Worms more-or-less never happens. Scolecodonts are known in the fossil record from the Cambrian onwards (there are some claims for Precambrian Scolecodonts, but these are not widely accepted), but are most abundant in the Ordovician, Silurian and Devonian. Scolecodonts have been used in biostratigraphy (using fossils to date rocks) but they are notoriously hard to work with.

In a provisional paper published on the website of the journal Acta Palaeontologica Polonica on 28 May 2013, Hubert Szaniawski of the Institute of Palaeobiology at the Polish Academy of Sciences and Daniel Drygant of the State Museum of Natural History of the National Academy of Sciences of Ukraine describe two new species of Scolecodont from the Early Devonian, as part of a wider discussion of Early Devonian Scolecodonts from escarpments of Dniester River in the Podolia Region of the Ukraine.

The first new species is placed in the genus Polychaetaspis, and given the specific name kozlowskii, in honour of the distinguished Polish palaeontologist Roman Kozłowski, who first described the genus. Polychaetaspis kozlowskii is described from three right and four left lower jaw elements and a basal plate, found by dissolving the rock matrix with acid then picking through the remaining material. The elements were found in the same sample and fit together well, suggesting this is a true species. 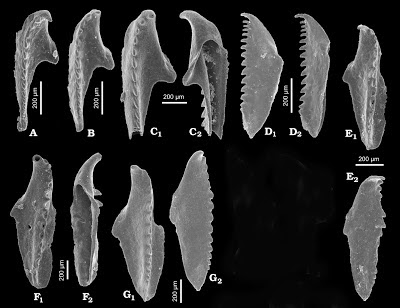 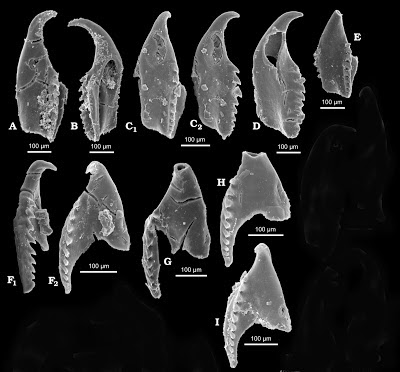