200 people evacuated after eruption on Tungurahua.

Around 200 people have been evacuated from the vicinity of Tungurahua Volcano in Ecuador, following an explosive eruption that took place slightly after 6.45 am local time (11.45 am GMT) on Sunday 14 July 2013, throwing up an ash column that reached an altitude of 5 km. The explosion was felt as far away as the Pacific coast, but there are no reports of any casualties related to the event. 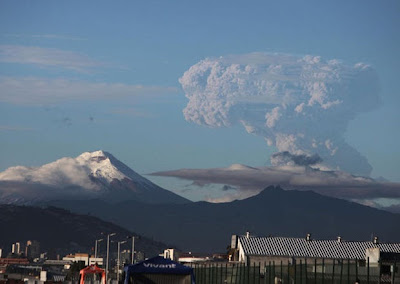 View of the ash column over Tungurahua from Quito, 135 km to the northwest. Vicente Costales/El Comercio.

Mount Tungurahua is a stratovolcano (a 'conventional' cone-shaped volcano, the sort you see in Hollywood movies) located in the Sangay National Park in Ecuador, overlooking the town of Baños de Agua Santa. The town's major industry is tourism, attracting visitors to visit the volcano, the hot springs associated with the volcano, and the Amazon Rainforest.

Tungurahua has been intermittently active since 1999 (prior to which it had been inactive for about 75 years), with major eruptions in August 2006, February 2008, May 2010, December 2010 and April 2011. The 2006 eruption killed seven people; two volcanologists and a local family. 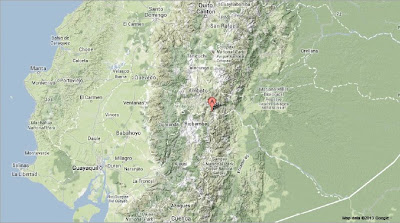 The location of the Tungurahua Volcano. Google Maps.