Typhoon Soulik kills one in Taiwan, heads for mainland China.

Typhoon Soulik made landfall in Taiwan at about 3.00 am local time on Saturday 13 July 2012 (about 7.00 pm of Friday 12 July, GMT), brining with it winds averaging 173 kmph, killing one person and injuring a further twenty one. The deceased person has been identified by a policeman who was struck by falling debris. Most of the other injuries were relatively minor. A further 8500 people were evacuated from the course of the Typhoon, though this it does not appear to have caused extensive damage, there have been a number of power outages, and schools and shops have closed in the worst affected areas. Flights in and out of Taipei have also been disrupted. 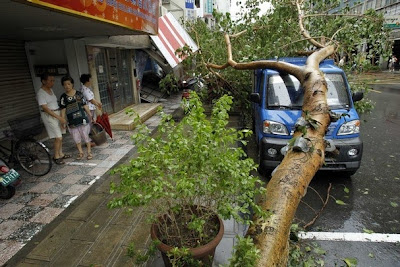 
The Typhoon is expected to make landfall in western Fujian province in mainland China within the next few hours, where preparations have been intense, with around 300 000 people evacuated from vulnerable areas in western Fujian and eastern Zhejiang provinces. Southourn China is already suffering from widespread flooding, and Soulik is expected to add to this. The low pressure above the storms causes water to rise there by ~1 cm for every millibar drop in pressure, leading to a storm surge that can overwhelm low-lying coastal areas, while at the same time the heat leads to high levels of evaporation from the sea - and subsequently high levels of rainfall. This can cause additional flooding on land, as well as waterlogging soils on slopes leading to landslides. 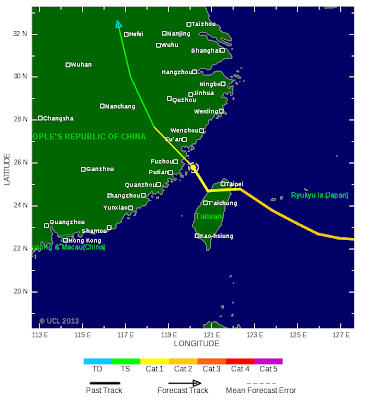 The path of Typhoon Soulik to 1.00 pm GMT on 13 July 2013 (thick line), and the predicted future path of the storm (thin line). Tropical Storm Risk.


Tropical storms are caused by solar energy heating the air above the oceans, which causes the air to rise leading to an inrush of air. If this happens over a large enough area the inrushing air will start to circulate, as the rotation of the Earth causes the winds closer to the equator to move eastwards compared to those further away (the Coriolis Effect). This leads to tropical storms rotating clockwise in the southern hemisphere and anticlockwise in the northern hemisphere.

These storms tend to grow in strength as they move across the ocean and lose it as they pass over land (this is not completely true: many tropical storms peter out without reaching land due to wider atmospheric patterns), since the land tends to absorb solar energy while the sea reflects it. They are categorised according to their wind speeds; using sustained wind strength (wind speeds maintained for a minute or more) rather than peak wind strength (the strongest gusts). A Super-Typhoon (or Super-Hurricane, or Super-Cyclone, depending on where these occur in the world), or Category 5 storm, has a sustained wind speed of 251 km/h or higher, a Category 3 Typhoon a sustained wind speed of 178-208 km/h.