Six protestors from the environmental group Greenpeace have climbed The Shard building in central London in order to protest drilling in the Arctic by oil company Shell. Greenpeace are protesting a deal between Shell and Russian giant Gazprom to cary out joint exploration of the Russian Arctic for oil and natural gas. This comes after plans by Shell to begin drilling in the Alaskan Arctic were put on hold by US authorities following the grounding of an exploration rig on Sitkalidak Island. The Shard is 306 m high, making it the tallest building in London, and indeed western Europe. 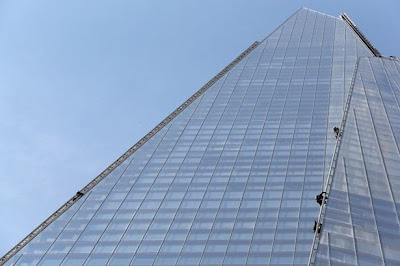 Protestors from Greenpeace ascending The Shard in London on 11 July 2013. Oli Scarff/Getty Images.


The six protesters were Ali Garrigan, 27, from Nottinghamshire, Sabine Huyghe, 33, from Ghen in Belgium, Sandra Lamborn, 29, from Stockholm in Sweden, Liesbeth Deddens, 31, from Groningen in the Netherlands, Victoria Henry, 32, from London, and Wiola Smul, 23, from Poland. They approached The Shard in a specially modified van which enabled them to secure themselves inside while they extended a ladder onto the London Bridge Station's ticket hall, from where they began their ascent. The climb was split into a number of stages, each of which required a lead climber to free-climb a section of the building before attaching a rope to the building's structure, allowing the remaining climbers to follow her path. The climbers remained roped-together throughout the expedition, so there was never a risk of a fall of more than a few meters.

Once the group had reached a position 18 m bellow the peak of the building, a final ascent was made by Polish climber Wiola Smul, the youngest member of the group, who unfurled a 'Save the Arctic' banner slightly before 7.00 pm. All six protestors were arrested n suspicion of aggravated trespass when they returned to the ground, though they were later bailed. 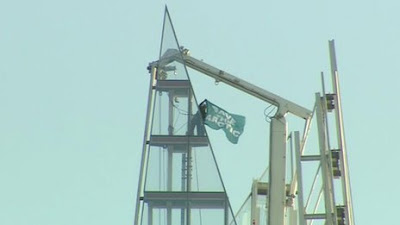 Polish climber Wiola Smul unfurls a Greenpeace banner from the top of The Shard building. BBC.