Pomatid Land Snails are terrestrial Gastropods closely related to Periwinkles. Resemble Periwinkles in their thick shell and the presence of an operculum (a calcareous plate that can be used to plug the opening of the shell). Unlike most Land Snails they have separate sexes (most Land Snails are hermaphrodites), and it is sometimes possible to tell the sexes apart visually.

In a paper published in the journal Zootaxa on 1 May 2013, Thomas Watters of the Department of Evolution, Ecology, and Organismal Biology at The Ohio State University describes seven new species of Pomatid Land Snail from Hispaniola in the Caribbean. Six are placed in the genus Abbottella, which is endemic to the island.

The first new Snail is given the name Abbottella calliotropis, meaning 'beautiful turning'. This is a small (4.6 by 5.5 mm to 7.0 by 8.3 mm) turban-shaped Snail with a distinctive lip around the opening to its shell. The species is described from a selection of shells found at a single location by the Rio Yuna in La Altagracia Province in the Dominican Republic. Many of the shells had been broken open on the first half of the final whorl, suggesting this is a common attack point for some unknown predator. 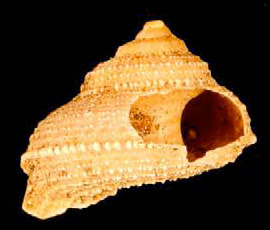 Specimen of Abbottella calliotropis showing shell broken open on the first half of the final whorl. Watters (2013).

The second new species is named Abbottella diadema, from diadem, meaning a headband or crown. This is another small Snail (3.1 by 3.7 mm by 5.1 by 6.0 mm), again with a distinctive lip. The shells are dirty white, or brown with faint patternation. The species is named from a collection of shells found at 280 m above sealevel at Cabo Cabrón on the northeastern tip of the Samaná Peninsula in the Dominican Republic. Many of these shells showed similar predator damage to those of Abbottella calliotropis. 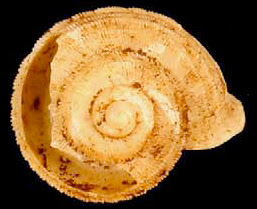 Specimen of Abbottella diadema showing shell broken open on the first half of the final whorl. Watters (2013).

The third new species described is named Abbottella dichroa, meaning two coloured; shells come in two distinct colours, white or brown, without intermediate shades. These are also small Snails (5.3 by 8.00 mm to 6.5 by 9.0 mm). Again there os a distinctive lip around the opening of the shell. The living snails were observed feeding on algae on limestone rocks in shady areas in a tropic forrest at several sites along the coast of Samaná and María Trinidad Sánchez provinces in the Dominican Republic. Some of these shells showed the signs of attack by the same unknown predator as the previous two species. 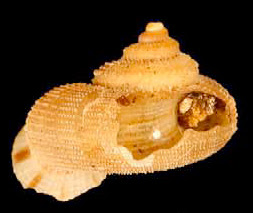 Specimen of Abbottella dichroa showing shell broken open on the first half of the final whorl. Watters (2013).

The fourth new species is named Abbottella nitens, meaning shiny or glittering; some of the specimens have a metallic sheen. This is another small Snail (5.9 by 6.1 mm to 8.5 by 8.6 mm), with distinct expansion of the lip around the aperture of the shell. The shells vary from brown to white in colour. The species is described from shells collected from a single locality, 100 m above sea level in La Altagracia Province in the Dominican Republic. As with the previous Snails, many of the shells showed signs of attack by an unknown predator that broke open on the first half of the final whorl. Some of these shells also have small, circular, holes drilled in them, interpreted as the result of attacks by Drilid or Lampyrid Beetles larvae.

Specimen of Abbottella nitens showing (left) shell broken open on the first half of the final whorl, and (right) a circular drill hole interpreted as the result of an attack by the larvae of a Drilid or Lampyrid Beetle. Watters (2013).

The fifth new species of snail is named Abbottella tenebrosa, meaning dark or gloomy, a reference to the colour of the shells. This is a slightly larger Snail (6.6 by 7.7 mm to 8.6 by 10.1 mm). The shells are dirty white to dark reddish brown and again have an expanded lip to the aperture. Some specimed had banding around the aperture or shells that were darker beneath. The species is described from specimens from a single location, on limestone outcrops at El Choco in Puerto Plata Province in the Dominican Republic.

The sixth new species in named Abbottella paradoxa, meaning unexpected. It appears to be most closely related to a species of Abbottella from Cuba (the only species known from outside Hispaniola), and therefore its discovery at a location in the interior of the Dominican Republic was unexpected. These are small Snails (5.9 by 6.8 mm to 7.9 by 9.1 mm), dirty white in colour with pale bands. There is a heavy lip around the aperture to the shell, which it was observed prevented the snails from withdrawing the operculum into the shell, making it a lid rather than a plug. The snails were lcoally abundant, living on limestone rocks in dense forest at Loma Diego de Ocampo on the summit of the Cordillera Septentrional, at a height of 1200 m above sea level.

The final new species is placed in the genus Leiabbottella, and given the specific name thompsoni, in honour of Fred Thompson of the University of Florida. This is a larger, flatter Snail (6.6 by 11.2 mm to 7.7 by 13.8 mm), with white, tan or bronze shells, with darker bands. This species also has a distinctive lip around the aperture to the shell. The Snails were found living at the base of deeply karsted limestone knolls and in ravines in tropical forest under debris and leaf litter, in the Los Haitises National Park in Monte Plata Province of the Dominican Republic. 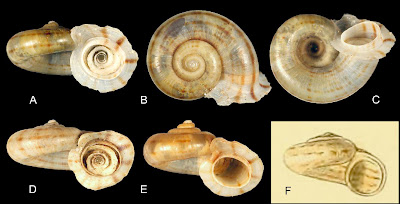 See also A new species of Slipper Limpet from Chile, Symbiotic Bacteria in Snails on the Eastern Lau Spreading Center, 'Extinct' Gastropod rediscovered in Alabama, A new species of Pachychilid Snail from western Java and Deep-sea Gastropods from Miocene Cold Seeps and Whale-falls in Japan.