Lava has been flowing intermittently on the north flank of Mount Shiveluch, a remote volcano on the Kamchatka Peninsula in the Russian Far East, since at least April this year (2013), according to the Kamchatkan Volcanic Eruption Response Team, who have been monitoring the volcano both visually and by satellite observations. Prior to this lava had been flowing on the east flank of the volcano since January. Complete breaks in such activity are rare, and the volcano has not been completely free of lava flows for more than a few weeks since 2006. The volcano underwent an explosive eruption on 27 July,  producing an ash column that rose to a height of 6.1-6.4 km, according to the Tokyo Volcanic Ash Advisory Center, and a second such event on 29 July, this time producing a 3.5 km high ash column that drifted 60 km to the east, producing an ash cloud 15 km long and 7 km wide. 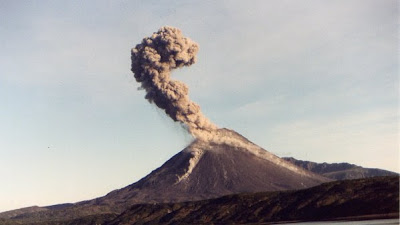 An ash cloud over Mount Shiveluch on 27 July 2013. Interfax. 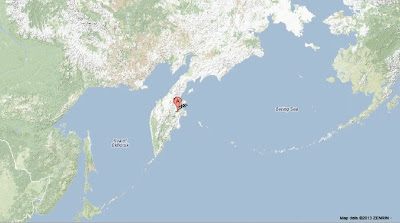