The Perseid Meteor shower lasts from late July to early September each year, and are expected to be at a peak on 12-13 August 2013, slightly after the New Moon on 6 August, which should guarantee a good display. At the peak of the shower there can be 50-100 meteors per hour. The Perseids get their name from the constellation of Perseus, in which the meteors have their radiant (appear to originate). 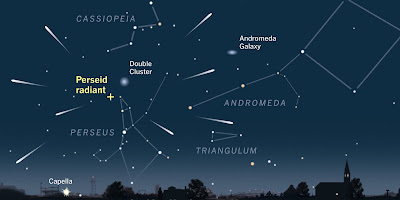 The radiant of the Perseid Meteors. Seattle Astronomy.


The shower is caused by the Earth passing through the trail of the Comet 109P/Swift-Tuttle, and encountering dust from the tail of this comet. The dust particles strike the atmosphere at speeds of over 200 000 km per hour, burning up in the upper atmosphere and producing a light show in the process.

The Earth does not need to pass close to 109P/Swift-Tuttle for the meteor shower to occur, it simply passes through a trail of dust from the comet's tail that is following the same orbital path. Comet 109P/Swift-Tuttle itself only visits the Inner Solar System once every 133 years, last doing so in 1992. It is currently 34.7 AU from the Earth (i.e. 34.7 times as far from the Earth as the Sun, further than the distance between Neptune and the Sun) on an eccentric orbit that takes it far bellow the plain of the Solar System. 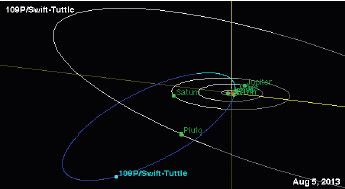