A mysterious Glass Sponge from the Early Cambrian of south-east China.

In a paper published in the journal Acta Palaeontologica Polonica on 27 March 2012, Joseph Botting, Lucy Muir, Xiang-Feng Li and Jih−Pai Lin of the State Key Laboratory of Palaeobiology and Stratigraphy at the Nanjing Institute of Geology and Palaeontology of the Chinese Academy of Sciences, describe a new and enigmatic Sponge from the Early Cambrian Hetang Biota of South China.

The new fossil species is named Decumbispongia yuani, where 'Decumbispongia' means fallen, or lying down, sponge and 'yuani' honours Yuan Xunlai for his previous work on Hetang Sponges. The species is described from four specimens from the Hetang Formation at Hongda Quarry near Lantian in Anhui Province, southeast China and one specimen from the contemporaneous Niutiang Formation of Guizhou State. Decumbispongia yuani is apparently  Hexactinellid (or Glass) Sponge, which typically use a skeleton made up of four- and/or six-pointed siliceous spicules to support an erect body, typically with a central cavity, which gives them a goblet or tumbler shaped body. However Decumbispongia yuani has a 'C' shaped tubular body, lacking an internal cavity, which suggests it must have had a profoundly different lifestyle from all other known Glass Sponges. The largest complete specimen is 52 m across, though a partial specimen was also found interpreted to be from an animal 70 mm across. 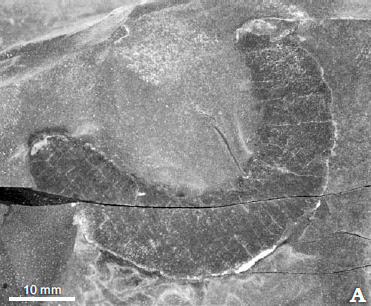 Glass Sponges are usually filter feeders, generating a current by passing water from inside their goblet through tiny pores in the sides where it is filtered for organic matter, and thereby generating a current which draws more food into the goblet. Decumbispongia yuani is interpreted as having lain prone on a  substrate (it seems poorly designed to stand erect), and lacks the central cavity of a typical Glass Sponge. It is possible that it drew in water from one side of its body and expelled it from the other, but it seems likely that a Sponge lying prone on the sediment which did this would rapidly burry itself. 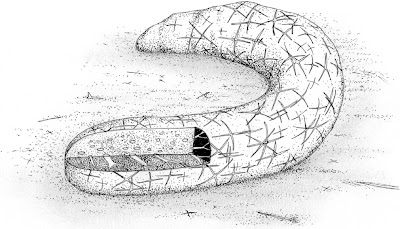 
Botting et al. consider two possible lifestyles that Decumbispongia yuani could have adopted. Firstly it could have been a detritivore, feeding on organic material on the seabed rather than in the water column, possibly through the use of extruded psuedopodia. However such a lifestyle is unknown in Glass Sponges, and typically requires that a sponge be able to move about to find new food sources, difficult for a Glass Sponge with a rigid siliceous skeleton. Secondly they consider that it may have been a chemotrophic symbiont of some form, with an internal bacterial or other microbiological symbiont that derived energy from an unknown chemical reaction which was in some way facilitated by the form and location of the Sponge, though without knowing the nature of the microbial symbiont it is impossible to guess how.