Parasitic Fly larvae from the Middle Jurassic of Inner Mongolia.

A wide range of modern Insects survive as ectoparasites of vertebrates, either by living permanently on their hosts, as with Fleas or by visiting animals to feed, as with Mosquitoes. However identifying such behaviour in the fossil record is difficult, and while a variety of parasitic insects are known from Cainozoic deposits, only Fleas are known from the Mesozoic, when most modern Insect groups are thought to have originated.

In a paper published in the journal eLIFE on 24 June 2014, a team of scientists led by Jun Chen of the Institute of Geology and Paleontology at LinyiUniversity describe a remarkable Fly larvae (maggot) from the Middle Jurasic Daohugou beds of Ningcheng County in Inner Mongolia.

The larvaeare formally named as Qiyia jurassica, where ‘Qiyia’ means ‘bizarre’ in Chinese and ‘jurassica’ refers to the age of the specimens. The species is described from five specimens preserved as surface impressions on grey siltstone. Two of these specimens have been compressed laterally and three dorsally, enabling the species to be examined from both angles. 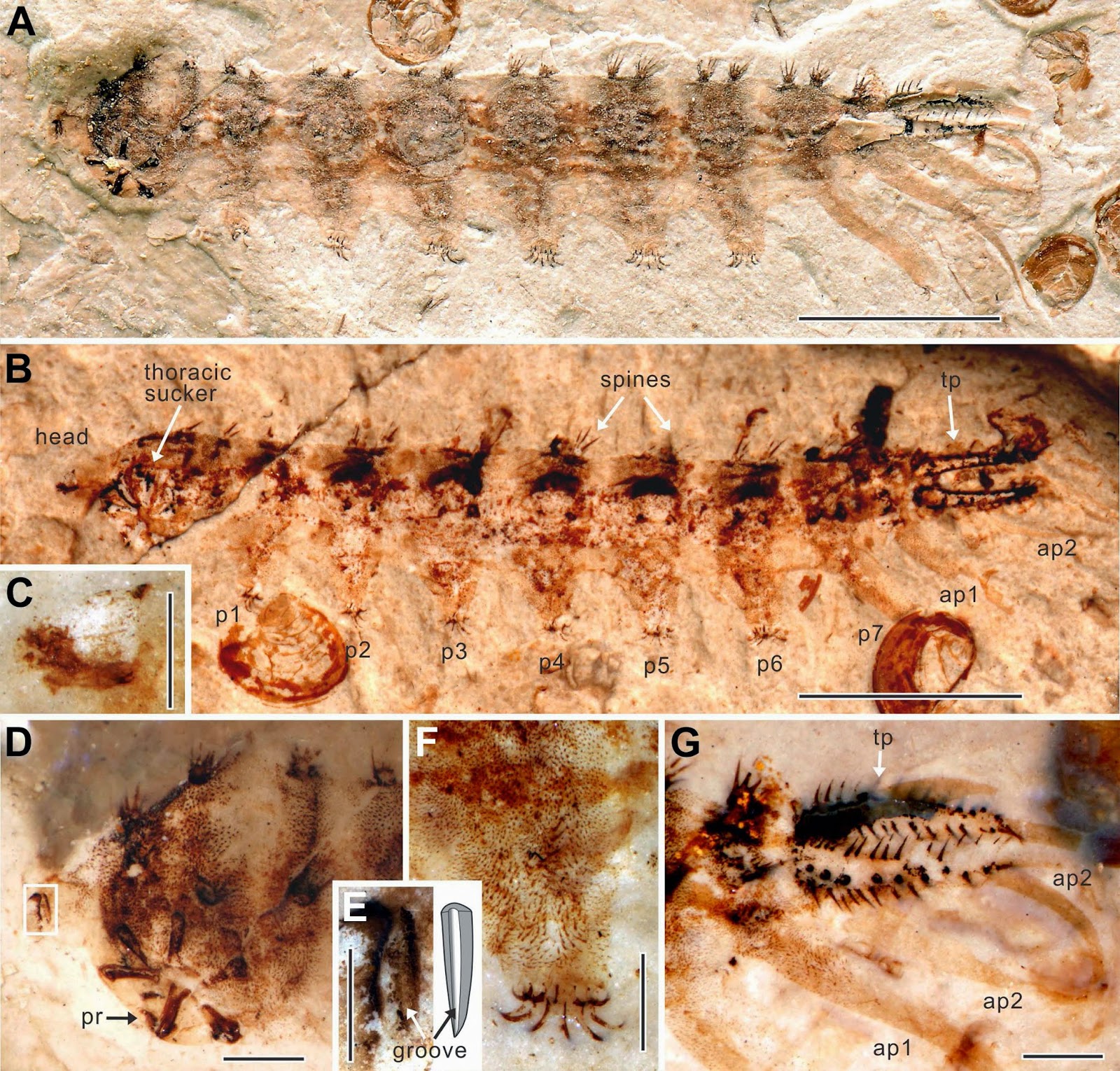 The specimens range from 18.1 mm to 23.8 mm in length. It has elongate, sickle-shaped mandibles, which are interpreted as an adaption to blood-sucking, and what appears to be a round sucker on the dorsal surface of its thorax, presumably with which to adhere itself to its prey. 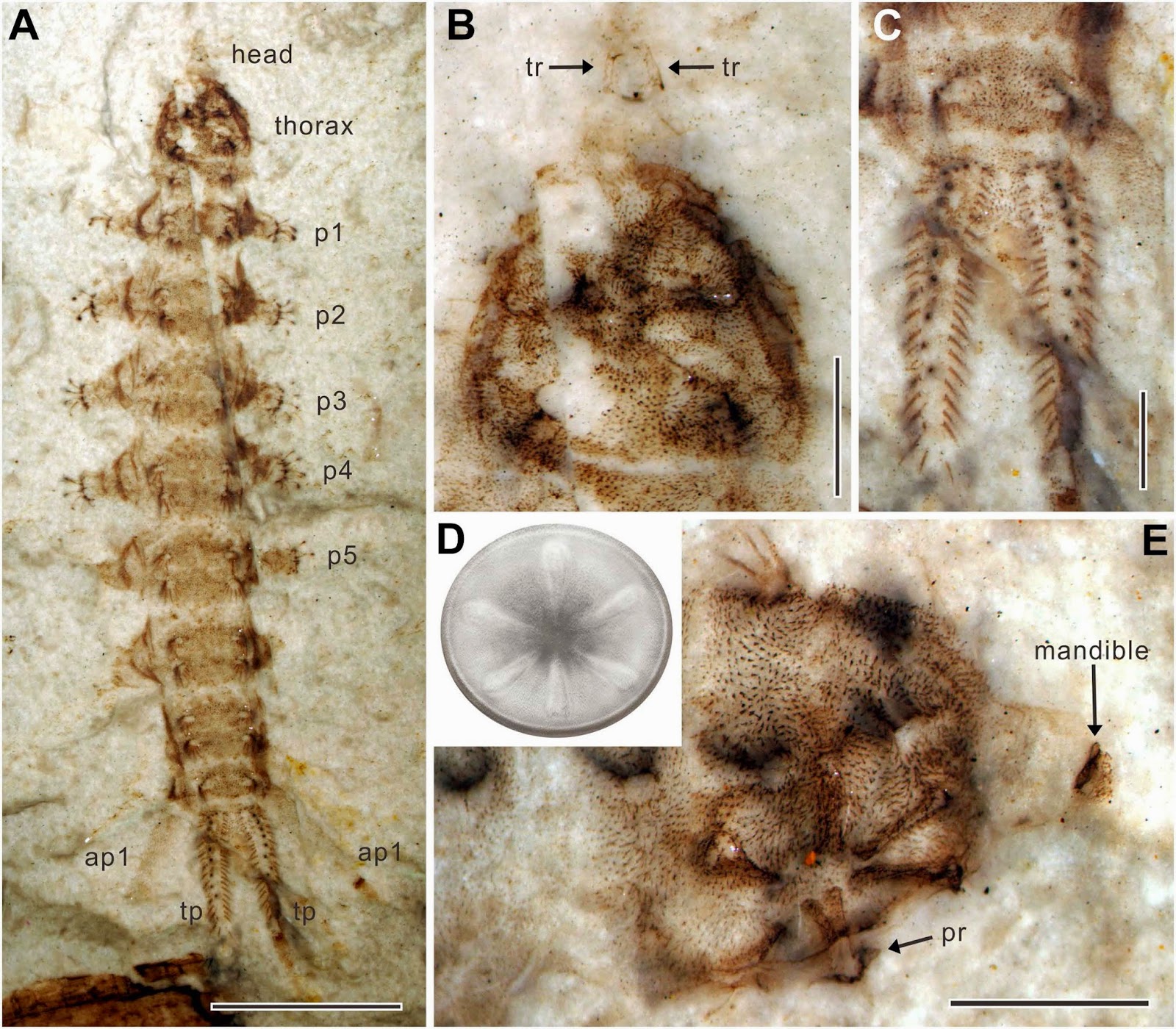 The larvae are interpreted as having belonged to a Water Snipe Fly (Athericidae). Modern Water Snipe Flies are blood parasites of vertebrates as adults, with larvae that are aquatic predators, living in fast flowing water and targeting smaller invertebrates. The Water Snipe Flies are considered to be the sister group to the Horse Flies (Tabanidae), making it likely that the common ancestor of the two groups was also a blood sucker, although neither group produces blood drinking larvae today, so it is unclear whether the adaptation seen in Qiyiajurassica is a separate innovation (the larvae of all True Flies metamorphose on maturity, and seldom have a larval lifestyle that even remotely resembles that of adults), or whether parasitism was the ancestral state in both larval and adult members of these groups. Fossils of adult Horse and Water Snipe Flies are known from the Early Cretaceous of southern England, with molecular studies suggesting the groups diverged in the Early-to-Middle Jurassic, but this is the first fossil evidence of either group prior to the Cretaceous.

The Daohugou beds are interpreted as a lake environment, with largely still waters. No fish have been recorded from these beds, but Salamanders are extremely numerous here, and were presumably the host group for Qiyia jurassica. Salamanders have thin skin, making them vulnerable to blood-sucking parasites, and those from the Daohugou beds are believed to have been aquatic throughout their entire lifecycle, reaching maximum lengths of about 500 mm. This is about the right size for a parasite the size of Qiyia jurassica, and means that an attached larvae would have been unlikely to have been removed from the water by its host.

Winter Crane Flies from the Middle Jurassic Jiulongshan Formation of Inner Mongolia.  Winter Crane Flies (Trichoceridae) are large True Flies (Diptera) with a (slightly erroneous) reputation for being tolerant of cold conditions. In fact a few species are capable of remaining active in winter, with some even mating and laying eggs beneath snow cover, but other... 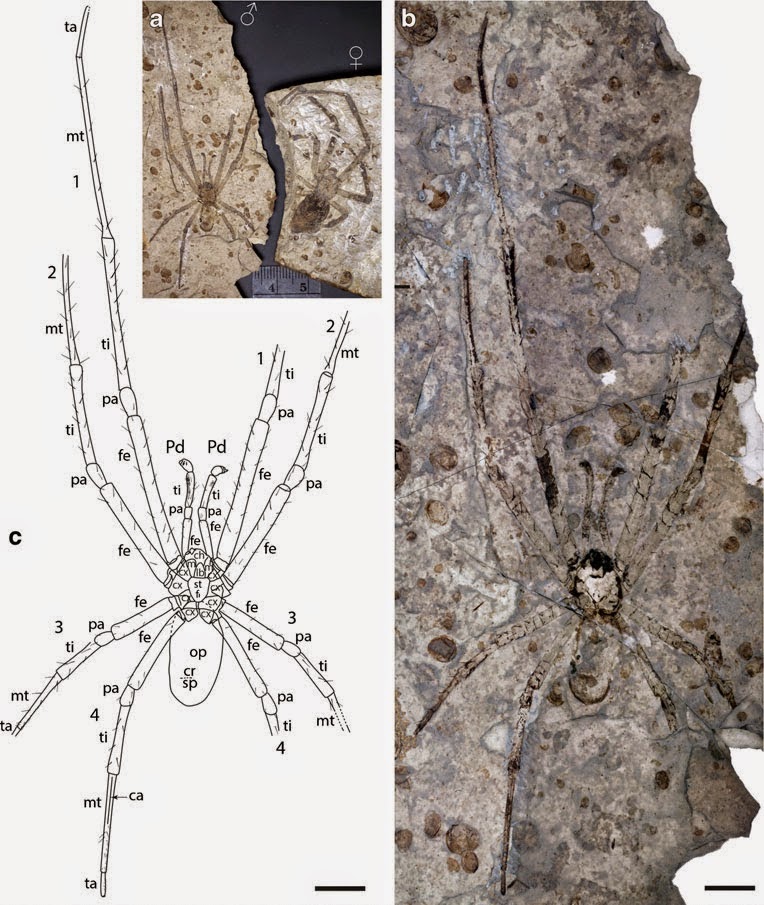 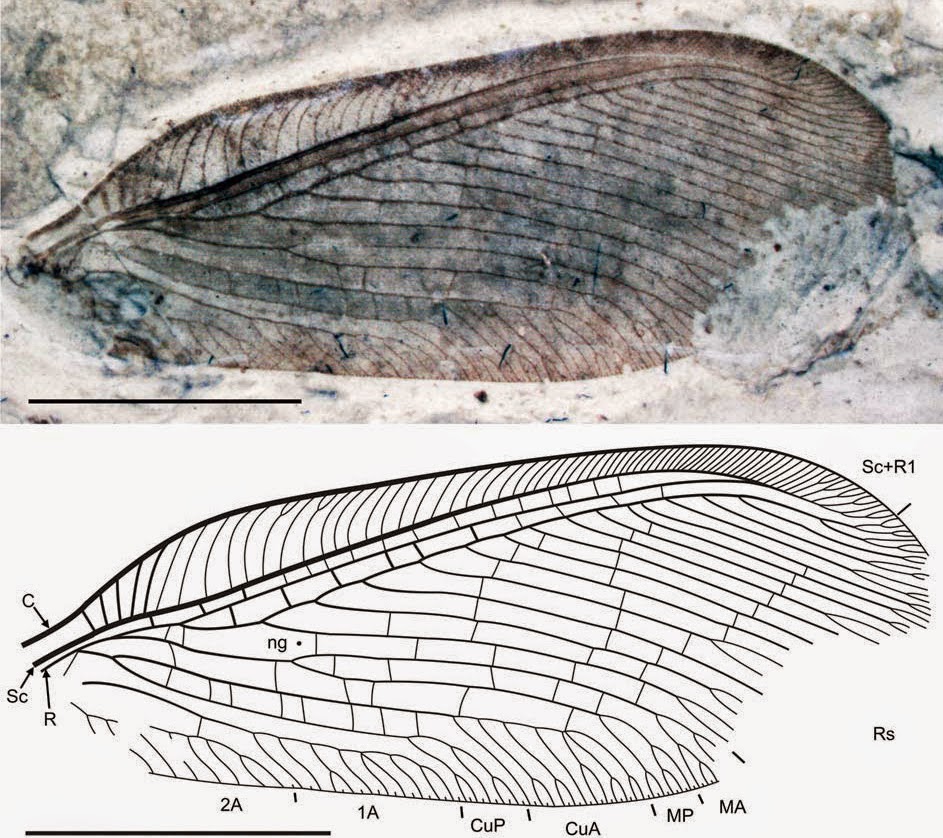 A new species of Osmylid from the Middle Jurassic Daohugou Biota of Inner Mongolia Osmylids (Osmylidae) are a group of Neuropteran Insects with a fossil record dating back to the Early Jurassic and are still in existence today. They appear to have been at their most numerous and diverse in the Middle-Late Jurassic, with a number of lineages apparently disappearing at the Jurassic-Cretaceous...
Follow Sciency Thoughts on Facebook.