The climate of Earth is driven largely by the planet’s seasons; the axis about which the planet rotates is tilted relative to the plane of its orbit, so that its hemispheres are tilted either towards or away from the Sun for half of each year (with the poles spending several months in complete darkness), leading to differential warming of the hemispheres. Similar climatic systems have been observed on Mars and Neptune, which are also tilted relative to the plane in which they orbit. However the most extreme case of seasonality seen in our Solar System is that of Uranus, which is tilted to such an extent that it is effectively lying on its side, with its poles being plunged into complete darkness for 40 years at a time.

In 2007 a distinct storm system was observed in the Southern Hemisphere of Neptune which was named the ‘Berg’, at a latitude of 34°, which developed into a major weather event, migrating to the equator in 2005, persisting through the equinox of 2007 (when the equator of Uranus was tilted directly to the Sun), and eventually breaking up in 2009.

A number of cloud features have also appeared in the Northern Hemisphere, notably a storm system at about 30° known as the ‘Bright Northern Complex’, which has been observed for a number of years.

In a paper published on the arXiv database at Cornell University Library on 8 January 2015, Imke de Pater of the Astronomy Department at the University of California, Berkeley, the Faculty of Aerospace Engineering at the Delft University of Technology, and the Netherlands Institute for SpaceResearch, Lawrence Sromovsky and Patrick Fry of the Space Science and Engineering Center at the University of Wisconsin-Madison, Heidi Hammel of the Association ofUniversities for Research in Astronomy, Christoph Baranec of the Institute for Astronomy at the University of Hawai`i at Mānoa and Kunio Sayanagi of the Department of Atmospheric and Planetary Sciences at Hampton University, describe the results of a series of observations made of Uranus with the 10-m W. M. Keck II telescope on Maunakea in August 2014, and follow-up observations made as a result of this.

De Pater et al. observed Uranus for 4.5 hours each night on 5 and 6 August 2014, at three bandwidths, H (1.48-1.78 µm), K' (1.95-2.30 µm) and CH4S (1.53-1.66 µm), then on 17 August at two bandwidths, H and J (1.17-1.33 µm), then at bandwidths H and K' again on 20 August. The different bandwidths enable different depths in the atmosphere to be imaged, although the results relate to pressure (which changes) rather than absolute depth, so accurate depths for features cannot be given. Higher bandwidths represent higher layers in the atmosphere, so K’ is higher than H is higher than J, and CH4S represents a narrow slice of part of the H altitude range.

Uranus had not exhibited significant atmospheric activity for several years, and none was predicted for August 2014, however a number of sizable atmospheric features were detected in the Northern Hemisphere in both bandwidths on 5 and 6 August, and these persisted in the 17 and 20 August images (although since coverage was not constant it cannot be completely confirmed that these were the same and not similar features). The storms were particularly bright in the K’ bandwidth, accounting for about 30% of all the light reflected by the planet at these wavelengths. 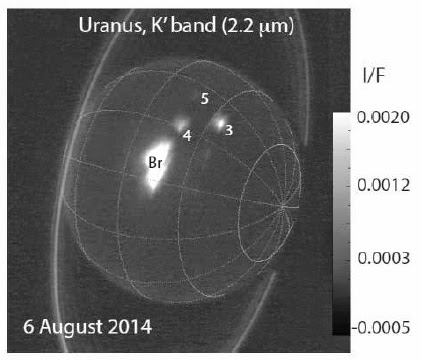 As well as the larger storm features visible in both bandwidths, a number of smaller storms were visible in the H band only, several of which appeared to be trailing plumes of particles to the east (down in the images). These were also visible in the CH4S bandwidth. 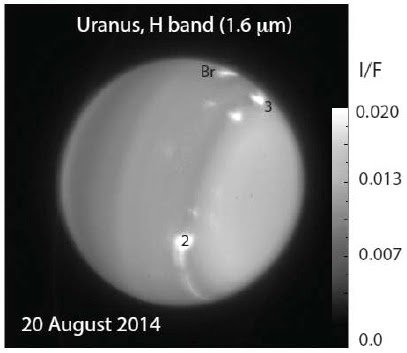 The largest feature observed was a storm labelled ‘Br’, which extended ~25° in longitude (almost 10 000 km) and ~7° in longitude, and which was much redder towards its western extent, which implies a different cloud altitude. Another large storm, designated ‘1’ extended over almost ~15° in longitude and ~3° in latitude, and was redder in the east. Both are surrounded by relatively featureless areas, implying that they may be related to vortex features in the deeper atmosphere. De Pater et al. suggest these features may be gas rising from deeper in the atmosphere, with compounds such as methane condensing to form clouds as it reaches levels to cool for them to remain in a gaseous state. Storm Br was particularly bright in the K’ spectrum, suggesting this storm was reaching particularly high in the atmosphere. 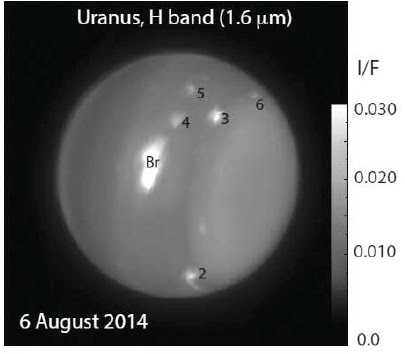 These events were considered sufficiently remarkable that de Pater et al. asked the amateur InternationalOuter Planets Watch organisation to make follow-up observations during the later part of 2014. This group made observations with telescopes ranging from 14 inch to 1 m in size, and at bandwidths of ~650-850 nm. These observers reported a number of sightings of cloud formations on Uranus over the following months, though the storm most observed was a system numbered ‘2’ by de Pater et al., which is thought to have been deeper in the atmosphere of Neptune than the other events.

On 14 October 2014 Neptune was imaged by the Hubble Space Telescope at a wavelength of 845 nm. This produced an image which showed the BR, 1 and 2 storms, with 2 at a longitude or 32° and 1 at roughly the same latitude at longitude 35°. The tail of 2 extends for over 40° of longitude, but is only visible in the blue part of the spectrum. 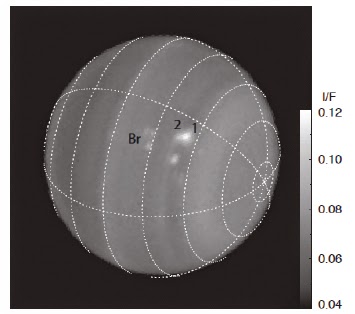 Understanding the satellite Himalia.             Himalia is the largest of Jupiter’s irregular satellites; smaller moons, non-spherical in shape and with irregular, non-circular orbits, unlike the larger Galilean Moons, which are more planet-like bodies. It has a prograde orbit (i.e. it orbits in the expected direction, the same way as the planet rotates and the larger... 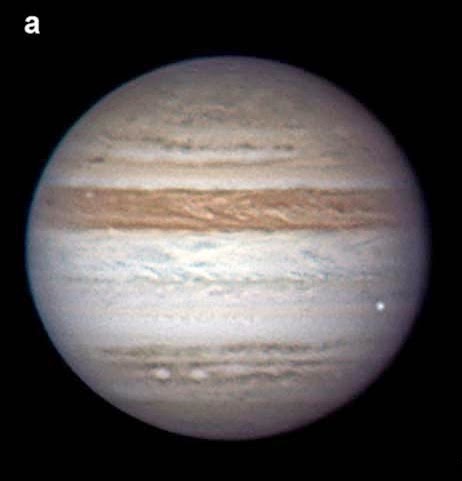 The 3 June 2010 Jovian Impactor.                         A small but growing number of observations of bolide impacts on other worlds in the Solar System have been made. The most notable of these are the impact of Comet Shoemaker-Levy 9 into the Jovian atmosphere in 1994 and the July 2009 impact of a similar but unnamed body with the same planet. In addition a number of smaller events have been recorded in recent years, on the Moon, Mars and Jupiter. 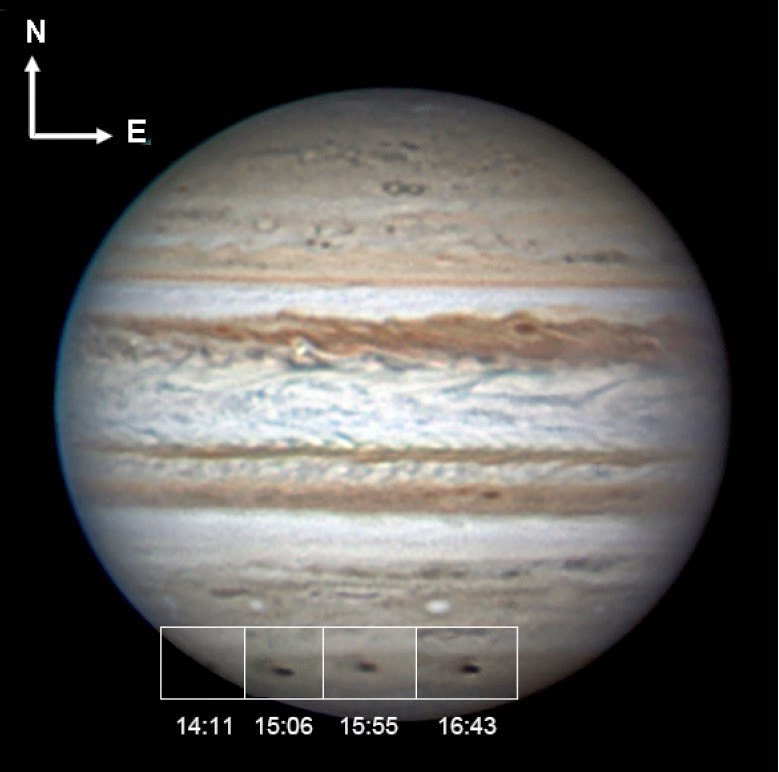