Searching for bright objects in the Outer Solar System.

For over a century Pluto was the only known bright object in the Solar System beyond Neptune, but in the past two decades a large number of such objects have been discovered. The difficulty in seeing finding such objects lies not in observing them at all, but rather in detecting their movement, which is what reveals them to be a part of the Solar System rather than remote astronomical objects. Typically the movement of a body in the Inner Solar System can be detected from observations made hours apart, in which Outer Solar System objects appear effectively motionless. Only with the advent of long-term wide-field surveys, which enable the tracking of such objects over several months, has enabled the detection of many more such objects, though once their orbits and magnitudes were established, it has been possible to locate many of these objects in photographic plates taken by observatories dating back to the 1950s.

In a paper published on the arXiv database at Cornell University Library on 6 January 2015, Mike Brown of the California Institute of Technology, Michelle Bannister of the University of Victoria and The Australian National University, Andrew Drake, George Djorgovski, Matthew Graham, Ashish Mahabal and Ciro Donalek of the California Institute of Technology, Steve Larson, Eric Christensen and Ed Beshore of  the Lunar and PlanetaryLaboratory at The University of Arizona and Rob McNaught of The Australian National University, describe the results of a study of data collected by the Catalina Sky Survey in the Northern Hemisphere and Siding Spring Survey in the Southern Hemisphere, with the objective of discovering previously undetected bright objects on the Outer Solar System.

The Catalina Sky and Siding Spring Surveys are designed to search for Near Earth Objects, but are also capable of detecting other bright objects in the sky.

The Siding Spring Survey operates from the 0.5 m Uppsala Schmidt telescope at Siding Spring Observatory in Australia, and is capable of detecting objects with magnitudes of 19.0 or less, with each image covering 4.2 square degrees of sky. Brown et al. used data collected by the Siding Spring Survey between 20 February 2005 and 29 April 2012, covering approximately 14100 square degrees of sky from declination -80 to 0. Since there is some overlap between the two surveys, the total area covered is approximately 29700 square degrees, although it is impossible to survey for objects at galactic latitudes of less than 10 degrees (i.e. within 10 degrees of the plain of the galaxy) due to the density of the stars in this part of the sky. 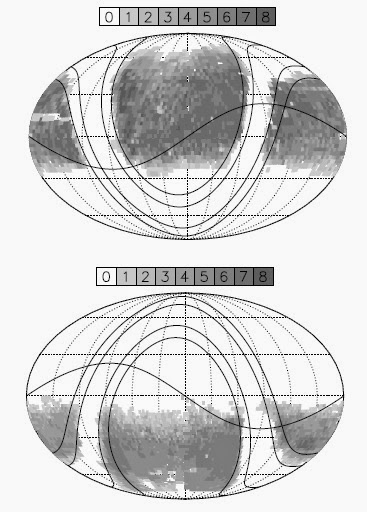 (a) Coverage of the Catalina Sky Survey (CSS). The shading shows the number of opposition seasons in which each field has been covered 4 or more times. The equal area plot is centred at an RA of 180 degrees and a declination of 0 degrees with grid marks placed every 30 degrees of RA and declination. Contours of galactic latitude of 10 and 20 degrees are shown as well as a line showing the ecliptic. (b) Coverage of the Siding Spring Survey (SSS). All parameters are as in (a) except that the plot is centredat an RA of 0 degrees. Brown et al. (2015).

The Catalina Sky and Siding Spring Surveys are intended to search for Near Earth Objects (asteroids and comets whose paths bring them close to the Earth) as such the data produced by them has already been filtered for moving objects closer than 25 AU from the Sun (i.e. 25 times as far from the Sun as the Earth or less).  An object moving in a circular prograde orbit (the same direction as the planets, forwards) at a distance of 25 AU will appear to be moving in a retrograde orbit (the opposite direction to the planets, backwards) at a speed of 4.9 arcseconds per hour (the total sky, imagined as a sphere, is divided into 360 degrees, each of which can be subdivided into 60 arcminutes, each arcminute comprises 60 arcseconds); objects more distant from the Sun than the Earth appear to be moving in a retrograde orbits as they are moving more slowly than the Earth. For this reason Brown et al. looked for candidate objects sighted four times within a night within 4.9 arcseconds of one-another, counting these observations as a single sighting.

Some of these sightings were found to repeat at the same location on subsequent occasions. Such sightings are assumed to have been of undocumented astrophysical sources outside the Solar System. Objects which were not subsequently resighted were also excluded, being assumed to be either optical effects or one off astrophysical events. Objects which were subsequently observed within 4 arcseconds of the original sighting were retained as possible sightings of bright trans-Neptunian objects. This resulted in 1.2 million candidate objects in the Catalina Sky Survey Field and 2.3 million candidate objects in the Siding Spring Survey Field. 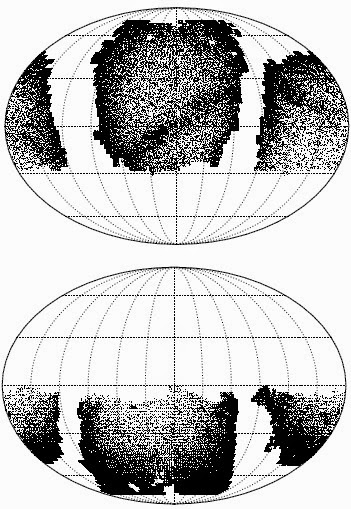 Such candidate objects were suspiciously common around the edges of the fields, particularly on the Siding Spring Survey and around the northern extent of the Catalina Sky Survey, making it likely that a lot of false sightings were present in these areas, probably stationary stars being recorded as moving objects. The comparatively high number of sightings in the Siding Spring Survey also made analysing this data more difficult. However a known bright Kuiper Belt objects, such as the dwarf planet Makemake, could be identified within the data, suggesting that the method was capable of detecting real objects.

Since objects in the Outer Solar System must follow Keplerian orbits, Brown et al. next looked for objects for which such orbits could be defined. This required a minimum of three separate sightings, since three orbital parameters can be derived from each sighting, and a minimum of seven parameters are needed to define a Keplerian orbit. Three randomly selected points will not usually resolve to a Keplerian orbit, ruling out sets of sightings of different objects. In order to make the data manageable, only groups of sightings made from pairs separated by less than 120 days were considered. However this resulted in a total of 160 billion potential triplets in the Catalina Sky Survey Data and 18 trillion potential triplets in the Siding Spring Survey data, which would take a prohibitive amount of computational time to process.

In order to further reduce the data volume, Brown et al. then looked for triplets which were moving on linear paths through the solar system perpendicular to the Earth-object vector. This reduced dataset still included known objects such as Makemake, and reduced the number of candidate triplets to 140 million in the Catalina Sky Survey data and 3 billion in the Siding Spring Survey data.

Brown et al. next calculated Keplerian orbits for these remaining triplets, ruling out those that could not be resolved. This reduced the number of candidate triplets to 4.8 million triplets in the Catalina Sky Survey data and 235 million in the Siding Spring Survey data. However this data was still likely to contain a considerable number of false sightings, requiring further data reduction to be used.

Brown et al. therefore decided to use quadruplets (sets of four sightings that could be determined to be the same object) rather than triplets. This reduced the number of candidate objects, with 1192 quadruplets detected in the Catalina Sky Survey data and 5515 quadruplets in the Siding Spring Survey data. This was a sufficiently small number to begin comparisons of the quadruplets, establishing whether the same objects had been detected multiple times.

The 1192 quadruplets recovered from the Catalina Sky Survey data yielded eight distinct objects, all of which were previously known (Makemake, Haumea, Orcus, Eris, 2002 TX300, Nereid, Huya and 2002 VE95). It was therefore concluded that requiring four observations per opposition season (an opposition season being the period when an object outside the Earth’s orbit is on the same side of the Sun as us, and therefore on the opposite side of the Earth to the Sun, the only time when faint objects visible only from reflected sunlight are visible) was sufficient to exclude false positives from the data. 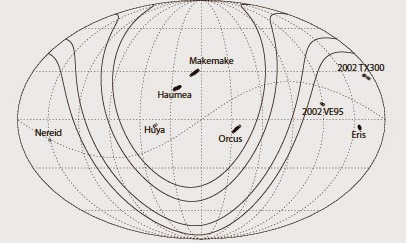 The eight objects detected in the Catalina Sky Survey. Each of theobjects is found to be a previously discovered object in the Outer Solar System. Brown et al. (2015).

This means that the Catalina Sky Survey data found every object in the Solar System beyond 25 AU brighter than magnitude 19.1 (though Uranus and Neptune were very bright objects which swamped observations and were therefore excluded from the data processing) except Pluto, which is known to have been in an area of the galactic plane excluded from the study for the entire period and Quaoar, which was actually observed twice in the first season, but then also moved into the galactic plane.The detections included seven Kuiper Belt Objects in heliocentric Keplerian Orbits, plus Nereid, an irregular satellite of Neptune. This strongly suggests that there were no undetected objects in the field survey area brighter then magnitude 19.1.

However none of the 5515 quadruplets observed by the Siding Spring Survey could be resolved to one another, suggesting that for this field raising the number of detections to four was insufficient to remove the false positives, probably due to the far larger number of original detections. Attempting to raise the bar to five detections also resulted in an observation rate of zero.  Thus while it is highly likely that Siding Spring was observing objects, a way to recover these from the data was not found.

Observations of New Horizons candidate bodies with the Hubble Space Telescope.      The New Horizons Spacecraft was launched in January 2006, and is due to pass through the Pluto System (Pluto is now recognized to be...

Pluto at opposition.
The dwarf planet Pluto will reach opposition slightly before 3.00 am GMT on Friday 4 July 2014; this means that it will be directly opposite the Sun in the sky when viewed from Earth, on this occasion in the...

The shape of Kuiper Belt Object 2003 SQ317.
The Kuiper Belt is a region of the Solar System extending from the orbit of Neptune at about 30 AU (i.e. 30 times the distance between the Sun and the...
Follow Sciency Thoughts on Facebook.