Methane storms as a possible cause of Titan’s equatorial dune fields.

Observations by the Cassini Space Probe have revealed vast dune fields, similar to those observed in the great sandy deserts of Earth, stretching around the equator of Saturn’s moon Titan. Surprisingly these appear to be formed by the actions of winds blowing west-to-east, while surface winds in the equatorial region of Titan, as on Earth, appear to blow overwhelmingly in an east-to-west direction. 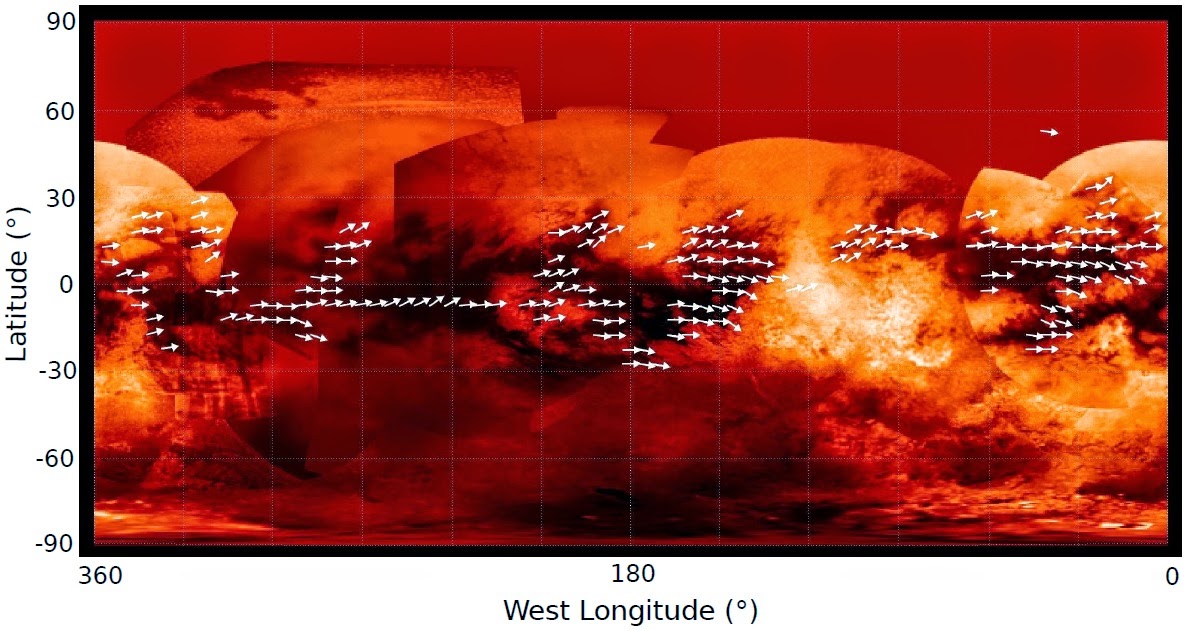 Five kilometres above the surface of Titan, the winds of the moon’s troposphere flow in a constant west-to-east direction, making them an obvious candidate to explain any surface features flowing in a similar direction. However the troposphere of Titan is separated from the lower atmosphere by a boundary layer about 2 km above the moon’s surface, apparently preventing any direct influence on ground features by this layer.

Titan has a weather system driven by its methane cycle in much the same way that the Earth’s weather is driven by water. This results in frequent methane precipitation (rainfall) and even flowing rivers on the surface of the moon, the only place in the Solar System other than Earth where such activity has been discovered. However the equatorial region of Titan is apparently methane-arid, with few cloud systems observed and generally clear skies.

In September 2009 a massive storm with an upper atmospheric limit 10-30 km above the surface with a width of about 2000 km was observed to develop on Titan, coincident with the moon’s equinox. Climate simulations suggest that convergent atmospheric currents might cause similar storms to develop on the moon each equinox, i.e. twice a Titan year, which since a year on Titan is 29.5 Earth Years, would be every 14.75 of our years (14 years and 9 months). The storm travelled about 4000 km during the time it was observed; and a 2000 km storm travelling 4000 km could be expected to affect about 20% of Titan’s equatorial belt, suggesting that at least 40% of this belt could be influenced by such storms each year.

Charnay et al.’s model suggests that such storms could generate downdafts reaching down to the surface, possibly associated with precipitation. Downdrafts created by storms in the upper atmosphere will move in the direction of the layer that generates them regardless of prevailing conditions at the surface, generating winds known as gust fronts at their leading edges. The model suggests that this could lead to west-to-east winds with wind speeds of up to 10 meters per second maintained for up to nine hours. This is far in excess of normal east-to-west wind speeds at ground level in the equatorial region of Titan, thought to average around 0.5 meters per second and seldom to exceed one meter per second. 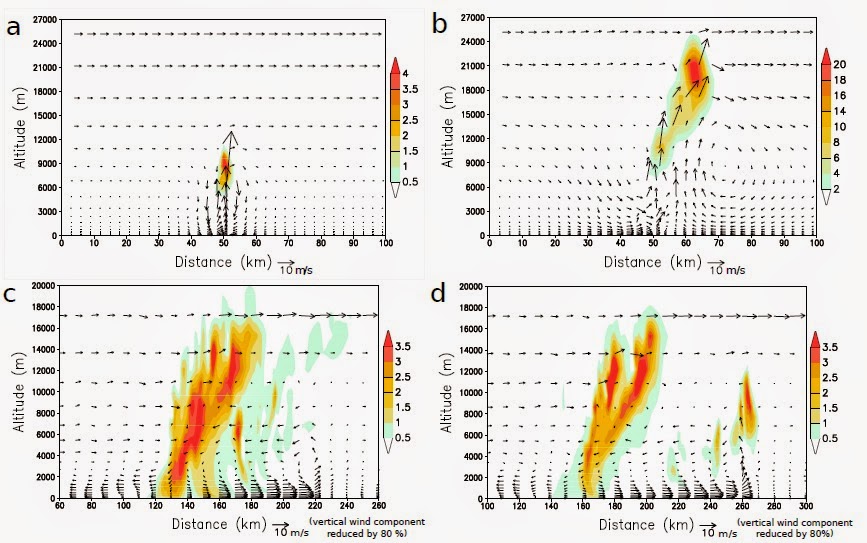 2D (altitude/longitude) simulation of the evolution of a storm under Titan’s conditions at equator during equinox. (a), (b), (c) and (d) are taken 1h, 1h40, 10h35 and 12h30 after the start of the simulation, respectively. The initial wind profile was derived from the Titan Institute Pierre Simon Laplace Global Climate Model. The initial methane humidity corresponds to a convective available potential energy of 500 J/kg. Colour bars indicate the mixing ratio of condensed methane in g/kg. The wind vectors are scaled to the axis. A reference vector of 10 m/s for zonal wind is shown. In (c) and (d), the vertical wind component is reduced by 80 % to better see the gust front. Charnay et al. (2015).

Since saltation, the movement of small particles at the surface by atmospheric currents, is driven by wind-speed (i.e. stronger winds can move more and bigger particles further), it is quite possible that infrequent strong winds can play a larger role in the formation of dunes (or other surface features) than weaker prevailing winds. The nature of the particles comprising the dunes in Titan’s equatorial region is unknown, but if a particle size of 300 μm (0.3 mm) is assumed then a windspeed of 0.9 meters per second would be needed to move particles by saltation, which the climate model used suggests may be exceeded by east-to-west winds for only 0.06% of the time, leading to a westward sand flux of 0.0015 square meters per year. Since the model includes sustained wind-speeds but not stronger gusts, Charnay et al. increased the wind-speed by 20% in their calculations, resulting in an annual westward sand transport of 0.018 square meters per year. This compares with a predicted eastward sand flux of 0.15 square meters per year, 2.7 times the larger figure derived for the westward flux, suggesting that episodic tropical storms could dominate sand transport and dune formation in this region. Were the particles to be larger than 300 μm (which does not seem unlikely) then there would be a much higher impact on the amount of sand moved by general circulation than by storm events (i.e. the larger the grain size the more the transportation of particles would be dominated by storm events).

Cassini Probe finds 400 km river on Titan.
NASA scientists have released an image of a 400 km long river on Saturn's moon Titan, imaged by the Cassini Space Probe during a flyby on 26 September 2012. The river meanders for some...


The Cassini Space Probe was launched on 15 October 1997 from Cape Canaveral Air Force Station and entered orbit around Saturn on 30 June 2004. It...

Saturn's moon Dione found to have an atmosphere.

Dione is was discovered in 1684 by the Genovan (coming from the Republic of Genova, part of modern Italy) astronomer Giovanni Domenico Cassini, the forth moon of Saturn to be discovered.