In the nineteenth century the origin of life seemed an intractable problem for palaeontologists, with large complex animal fossils appearing in the Cambrian explosion, but scientists having access to neither examples of earlier fossils nor the means with which to examine them. However from the early twentieth century onwards improvements in microscopy and petrography led to the discovery of a range of putative fossils of microscopic organisms, with the oldest dating back to almost 3.5 billion years ago. The search for the earliest life has concentrated on looking for simple cyanobacteria-like fossils, which our understanding of modern microbiology leads us to believe may be the earliest forms to appear likely to have left recognizable fossils. However comparison with the fossil record of larger organisms suggests that this may not be best approach; nothing we know about modern biology would have prepared us for the existence of Sauropod Dinosaurs, yet we have found numerous specimens in the fossil record and have little difficulty in recognising them as true fossils.

The Gunflint Chert is found at Schreiber Beach by Lake Superior in Ontario, Canada. It comprises an ancient shoreline laid down over an eroded Archean Lavabed during a marine transgression (period of rising sealevels). During this transgression boulders on this shore were draped with layers of carbonaceous chert and dolomitic carbonate, and then overlaid with banded ironstone. The chert layers of these deposits are noted for the presence of numerous tubular filaments, described as the a fossil Oscillatoriacean Cyanobacteria, Gunflintia. 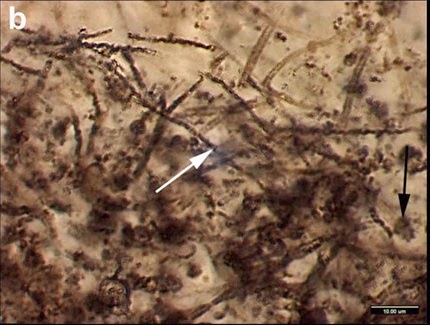 Although the Gunflintia fossils were originally interpreted as septate tubes, similar to modern Cyanobacteria, it is now thought likely that the divisions observed could be a taphonomic artefact, produced by decay processes within nonseptatetubular sheaths. Brasier et al. examined both newly made thin sections of the chert (i.e. slices of rock cut very thin to enable examination under a light microscope) and three-dimensional FIB-SEM models (computer generated models based upon serial Scanning Electron Microscope images) of the same, and found that while apparent septation was visible in the light microscope preparations, it could not be seen in the FIB-SEM models, and conclude that these septa are in fact an artefact.

The filamentous Gunflintia fossils are often surrounded by a second fossil-type, rounded cells with excystment-like openings, which have been named Huroniospora. These fossils may represent heterotrophic organisms feeding on the Gunflintia filaments, or possibly some form of spore or cyst, which may relate to the life-cycle of Gunflintia, or represent an entirely separate organism. 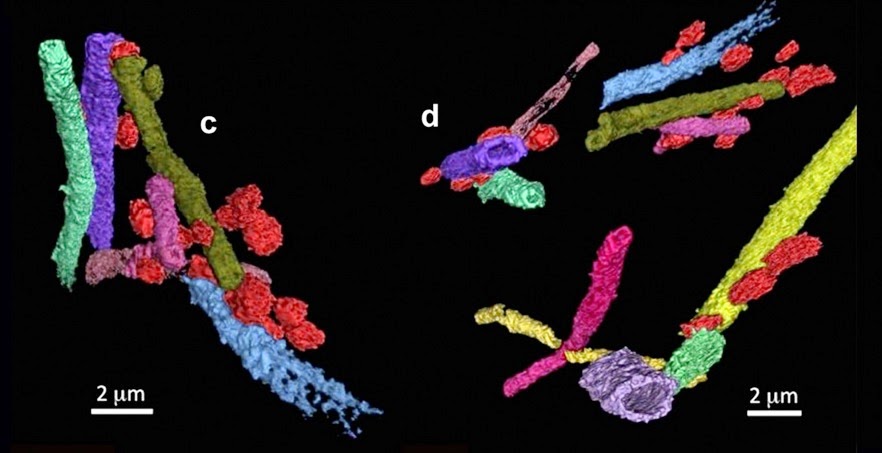 A third type of fossil is also present in the Gunflint Chert, to which Brasier et al. pay particular attention. Eosphaeratyleri comprises small spherical fossils 28–32 μm in diameter, which appear to have a thick walled inner sphere within a thin walled outer sphere. Each such body is surrounded by up to 15 smaller tubercle-like spheroids, though there seems to be no pattern in the way these are arranged. Examination of one of these fossils in a FIB-SEM reconstruction recovered a 30 μm outer sphere and a 20 μm inner sphere surrounded by ~10 1-7 μm spheroids in a regular pattern, each separated by about 5μm from its neighbours. 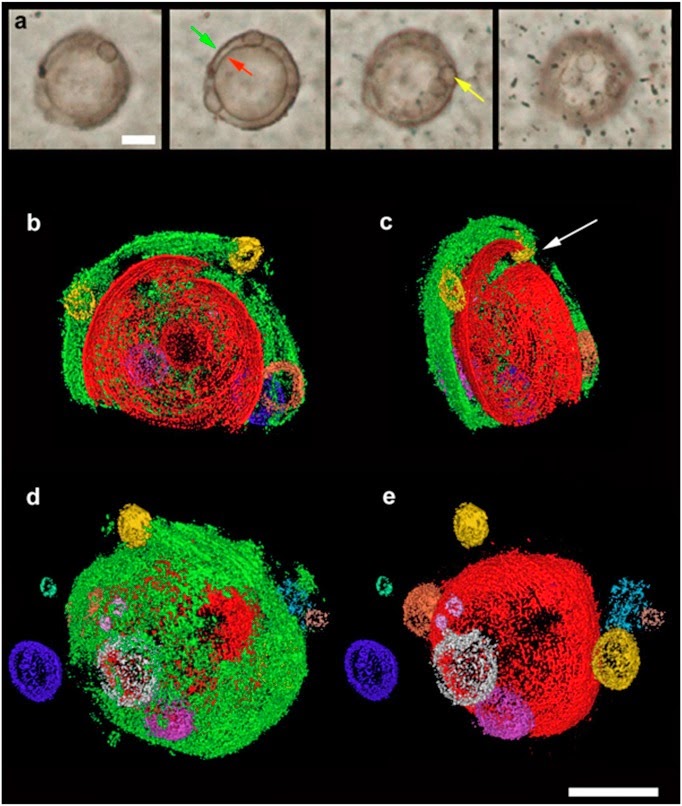 This regularity, which was not observed in previous light-microscopy based studies, strongly supports the idea that Eosphaera tyleri is of biological origin, although different from any living micro-organism. Brasier et al. suggest three possible explanations for this. Firstly, Eosphaera tyleric ould be a member of an extant group such as the Cyanobacteria, which inhabited an ecological niche available to such organisms but now no longer available, due to the evolution of more sophisticated competitors such as Eukaryotes (organisms with cells that have true nuclei). Secondly Eosphaera tyleri may represent an extinct group of organisms otherwise unknown in the fossil record with a lifestyle unlike any known organism. Thirdly, it may be a symbiotic organism, with a large host cell and either the inner sphere or the surrounding cells or both representing symbiotic organisms. This is at first sight a slightly exotic explanation, but is a stage predicted in the evolution of Eukaryotic cells, and could therefore potentially be found in the early fossil record.

The Apex Chert comprises chert inclusions in the 3.46 billion year old Apex Basalt of the Warrawoona Group, Western Australia. This is interpreted to be one of the oldest known silica-rich hydrothermal systems, and is associated with other interesting deposits, such as pumices with putative biological signals. The Apex Chert has produced putative microfossils assigned to eleven species, considered to be similar to Cyanobacteria, though not formally assigned to any group. These specimens have widely been accepted as the oldest known cellular fossils, though older biomarkers (chemical traces thought to have been produced by the actions of living organisms) are known. 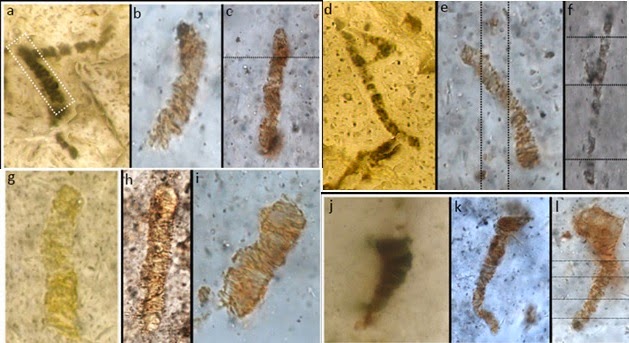 The original description of the Apex Chert locality interpreted the cherts as having formed on a wave influenced beach or stream system with hydrothermal input. However Brasier et al. re-examined and remapped this locality, and came to the conclusion that the deposits represent a subsurface hydrothermal vein system, possibly as much as 100 m bellow the ground. This is a highly unlikely environment for a Cyanobacteria-like organism as Cyanobacteria, and therefore presumably other organisms with a similar lifestyle, are dependent on light for photosynthesis, and therefore cannot survive in an underground environment.

Brasier et al. next inspected the fossils themselves for mineralogical composition. The original material from which the fossils had been described was mounted in thick preparations and stored at the Natural History Museum in London. These proved to be unsuitable for mineralogical analysis, but a new sample of the material, CHIN-03, from which new specimens were obtained comparable to the original material. The original descriptions of the Apex Chert material suggested that it comprised carbonaceous cell walls with interior spaces infilled with silica. However after examining the new material Brazier et al. conclude that the ‘fossils’ are in fact vermiform aggregates of plate-like aluminosilicate grains, and therefore pseudofossils of non-biologiacal origin. 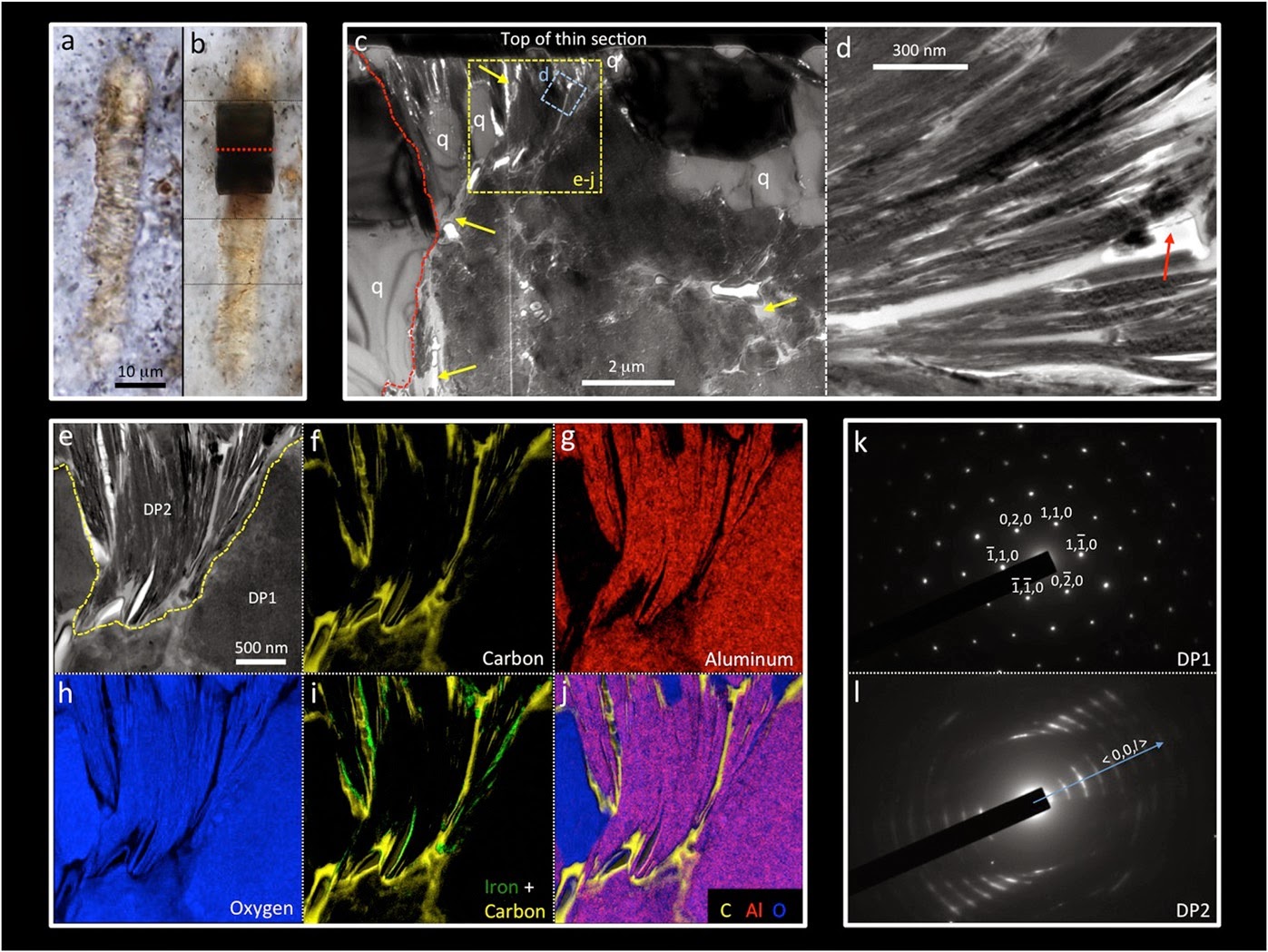 Nanoscale structure and chemistry of a vermiform pseudofossil comparable to Archaeoscillatoriopsis grandis from populations in the Apex Chert dyke (microfossil site, sample CHIN 03). (A and B) Optical photomicrographs of Archaeoscillatoriopsis grandis before and after extraction of an ultrathin wafer for analysis by Tunnelling Electron Microscope (TEM). Position of wafer indicated by red dashed line in (B). Thin black lines in (B) separate images taken at different focal depths. (C) Bright-field TEM image showing an overview of the pseudofossil (left margin denoted by dashed red line) below the surface of the thin section. It comprises plate-like phyllosilicate grains (dark grey, spikey in cross section at top of image), minor quartz (q), and significant carbon (pale grey/white; four examples arrowed). (D) Bright-field TEM image of the blue-boxed area indicated in (C) showing the thin plate-like morphology of the phyllosilicates (dark grey) and the interleaving of carbon (light gray) between the phyllosilicate grains. Arrow points to a small hole within the carbon. (E) Bright-field TEM image and (F−J) false-colour energy-filtered TEM elemental maps of the yellow-boxed region indicated in (C). Carbon (yellow) is clearly interleaved between platy phyllosilicate grains (red) and shows no resemblance to cellular compartments. Minor iron (green) is also present, closely associated with carbon along many grain boundaries (I). This suggests that carbon and iron followed the same grain boundary conduits to enter the vicinity of the vermiform pseudofossil. The three-color overlay (J) most clearly demonstrates the distribution of quartz (blue), phyllosilicate (pink), and carbon (yellow) in this pseudofossil. (K and L) Selected area electron diffraction patterns from the regions of the TEM wafer indicated in E. DP1 is consistent with the [001] zone axis pattern from a 2:1 phyllosilicate. DP2 shows a pattern of ring arcs, representative of a set of closely aligned grains of a 2:1 phyllosilicate with the beam incident parallel to the {00l} plane. Brasier et al. (2015).

The Strelley Pool Sandstone is a 3.43 billion-year-old quartz sand from Western Australia deposited during the oldest known marine transgression. The grains are held in a chert matrix made up of multiple lamina (layers) implying chert deposition was episodic. As well as the sand grains, trapped within these chertlaminae are clasts of older black sandstone, grains of rounded pyrite and carbonaceous items which Brasier et al. regard as candidate microfossils.

These candidate fossils comprise clusters of elliptical or rounded bag-shaped bodies, as well as isolated coccoidal (spherical) and tubular cells. These bare similarities to cells found in the later Gunflint and Rhynie Cherts (the latter from the Devonian of Scotland) and preserved cells from modern beach-rock deposits from around hydrothermal springs in New Zealand. 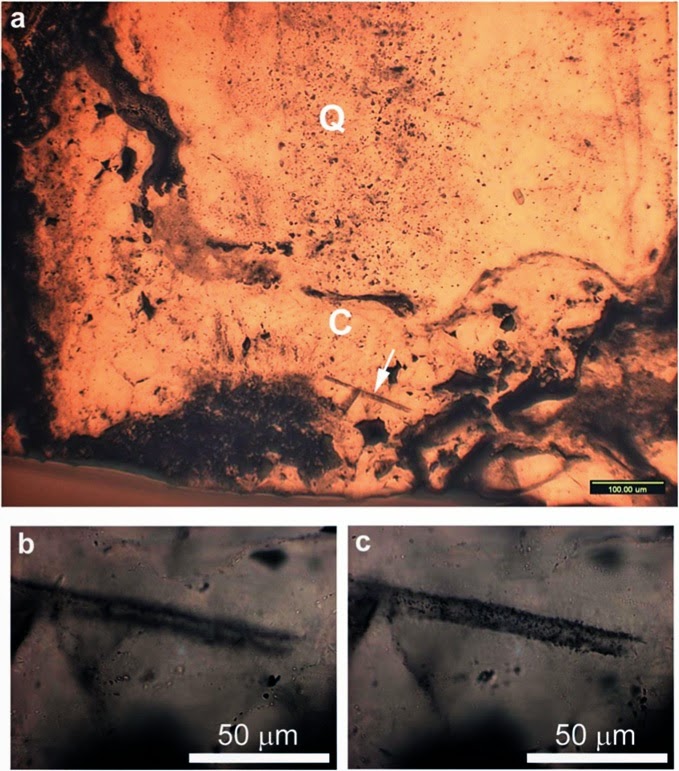 Optical images of a sheath-like microfossil candidate preserved within dripstone-like chert fabrics of the 3.43-Ga Strelley Pool Sandstone of Western Australia. (A) A small cavity (C) formed beneath a quartz sand grain (Q) crossed by a distinct dark tube (white arrow) that takes the form of a hollow, carbonaceous sheath-like structure. (B and C) Detail of the structure, showing two images taken at different focal depths illustrating a hollow and silica-filled construction provided with a rounded cross section. All images are plain polarized light micrographs. Brasier et al. (2015).

Working from this environmental interpretation, Brasier et al. suggest that the living organisms are likely to have carried out a form of anaerobic photosynthesis, similar to that seen in modern Purple Sulphur Bacteria. However they also note the cell walls seen in the Strelly Pool fossils are much thicker than seen in modern Proteobacteria (the group that includes both Cyanobacteria and Sulphur Bacteria), suggesting that either they are members of an extinct group, which coated their cells in a thick layer of exopolymers, or they are members of an extant group (such as the Proteobacteria) showing a novel morphology in response to an environment no longer found (anoxic intertidal sands). 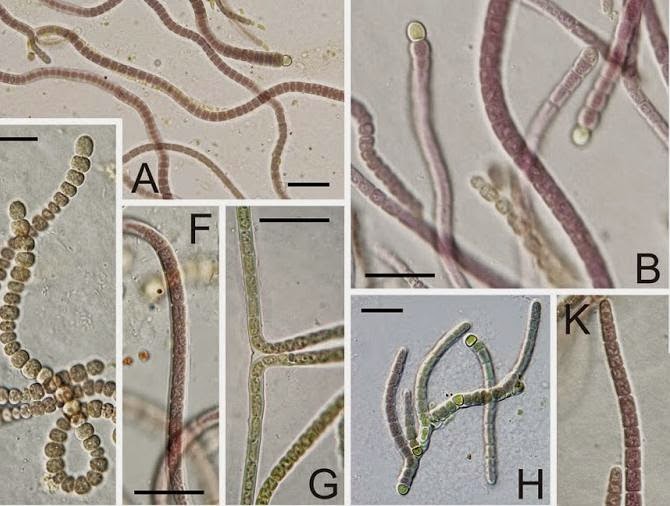 A new species of Cyanobacteria from Chirripó Mountain in central Costa Rica. Cyanobacteria are filament-forming photosynthetic Bacteria found across the globe and with a fossil record dating back over 3.5 billion years. They are thought to have been the first organisms on Earth to obtain carbon through photosynthesis, and it is also thought that the... 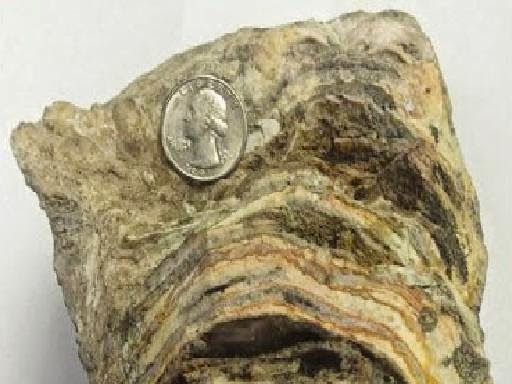 Examining an Ordovician Stromatolite with a tool to look for life on Mars.                                    The potential of there being life on Mars has been a stalwart of popular fiction for over a century, though to date no signs of actual life have been discovered. Recent discoveries of geological structures on Mars that indicate the presence of large bodies of open... 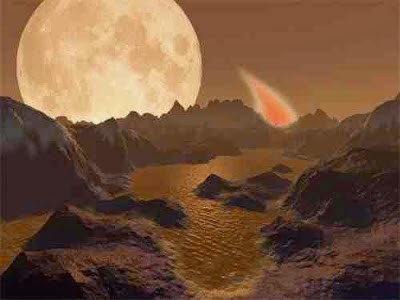 Cooking the primordial soup; did the first life emerge in volcanic pools?                             The blood plasma and lymph of modern animals is similar in chemical composition to seawater, strongly supporting the idea that animal life began in the oceans, but the liquid inside our cells has a quite different chemistry, suggesting that cells themselves first...
Follow Sciency Thoughts on Facebook.