Macaca leucogenys, a new species of Macaque from Modog County in southeastern Tibet.

For a long time it was considered that there were two species of Macaques present in the forests of southeastern Tibet, Macaca assamensis assamensis (the Assam Macaque and Macaca mulatta (the Rhesus Macaque). However in recent years work by Indian researchers in Arunachal State (referred to in China as ‘Indian-controlled Tibet'), which shares continuous forests with southeastern Tibet, has led to the description a new species, Macaca munzala (the Arunchal Macaque) and the detection of a fourth species Macaca thibetana (the Tibetan Macaque), previously thought not to be present in the region. However not all primatologists in India have accepted these results, suggesting that instead the known species may be more variable than previously thought. In response to this, scientists on the Chinese side of the border began a series of observations of Macaques present there in 2013 and 2014, and set camera traps in the forests Modog County in southeastern Tibet. To their surprise this resulted in the discovery of what appears to be another species of Macaque in the region, distinguishable by its coat and genital anatomy.

In a paper published in the American Journal of Primatology on 25 March 2015, Cheng Li of the Imaging Biodiversity Expedition, Chao Zhao of the Institute of Eastern-Himalaya Biodiversity Research at Dali University and Peng-Fei Fan of the Faculty of Forestry at Southwest Forestry University formerly describe this new species as Macaca leucogenys, the White-cheeked Macaque.

Traditionally new species have been described by the assignation of type specimens in museums, against which other specimens can be compared to establish whether or not they belong to the same species. However the International Code of Zoological Nomenclature allows for the designation of photographs as types in the case of Primates, due to ethical concerns about killing wild specimens, and Li et al. take advantage of this provision to describe the new species from photographic data only, with the intention of obtaining museum specimens in the future. 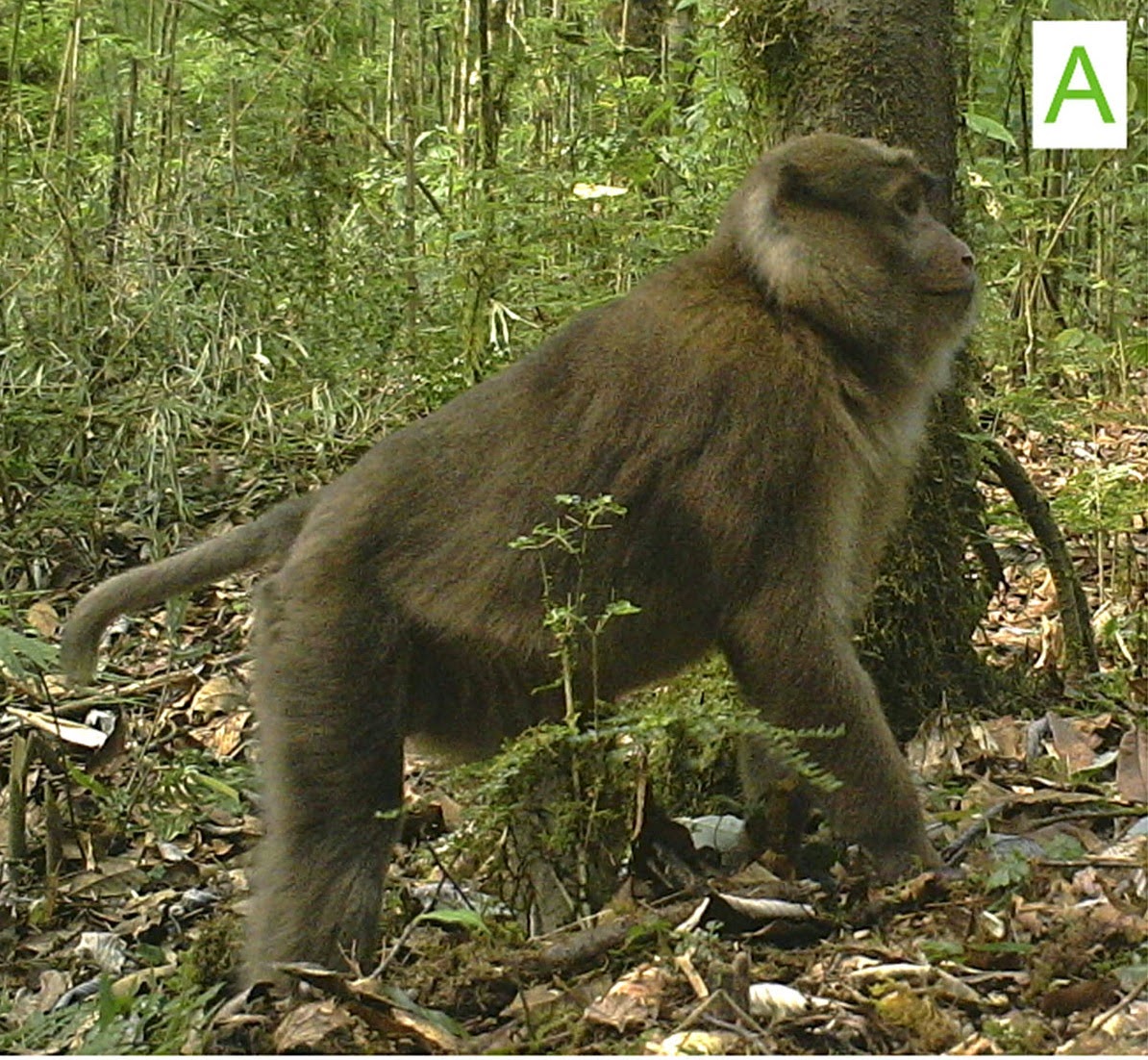 Photo showing robust White-cheeked Macaque with brown to dark brown dorsal pelage and relative short tail. The end of the tail bends towards the ground in some individuals. White hair on cheeks and ears are visible. Li et al. (2015).

The White-cheeked Macaque has a relatively uniform brown colouration on its body, though the belly is lighter than the back. The hair on the muzzle is the same colour as the body, but the cheeks and ears are white. In older individuals these white hairs grow longer, and white hairs also appear on the snout. Juveniles lack white cheeks. The tail is hairless and tapering, being distinctly thicker at the base then the tip; in many individuals it has a distinct downwards kink close to it’s tip. 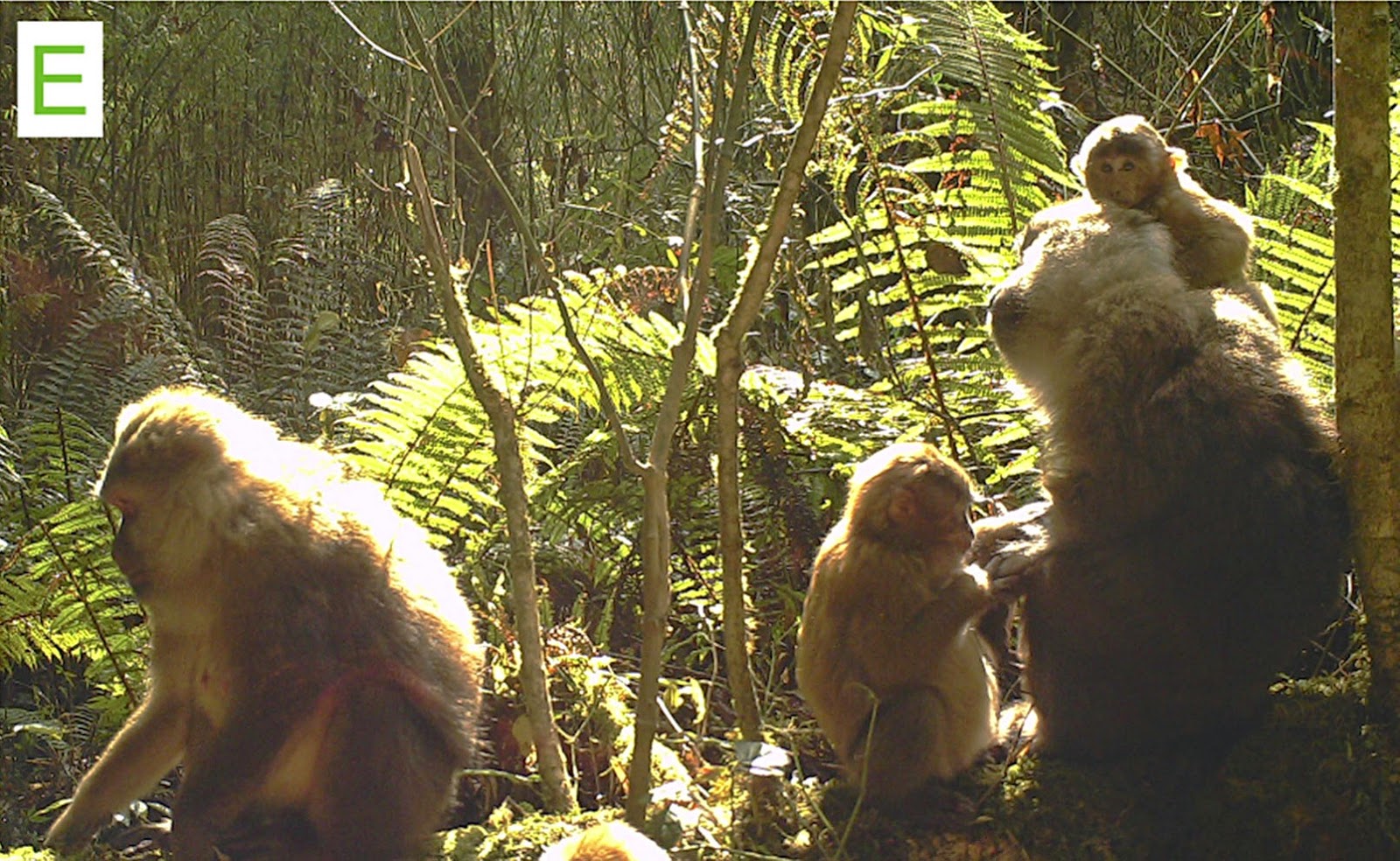 White-cheeked Macaques were found in the forests of Madog County at altitudes of between 1395 m and 2700 m, an environment that ranges from tropical forests, through evergreen broadleaf forest and into mixed broadleaf-conifer forest, suggesting a degree of environmental flexibility. It may also be present in neighbouring counties of China or other Himalayan nations. 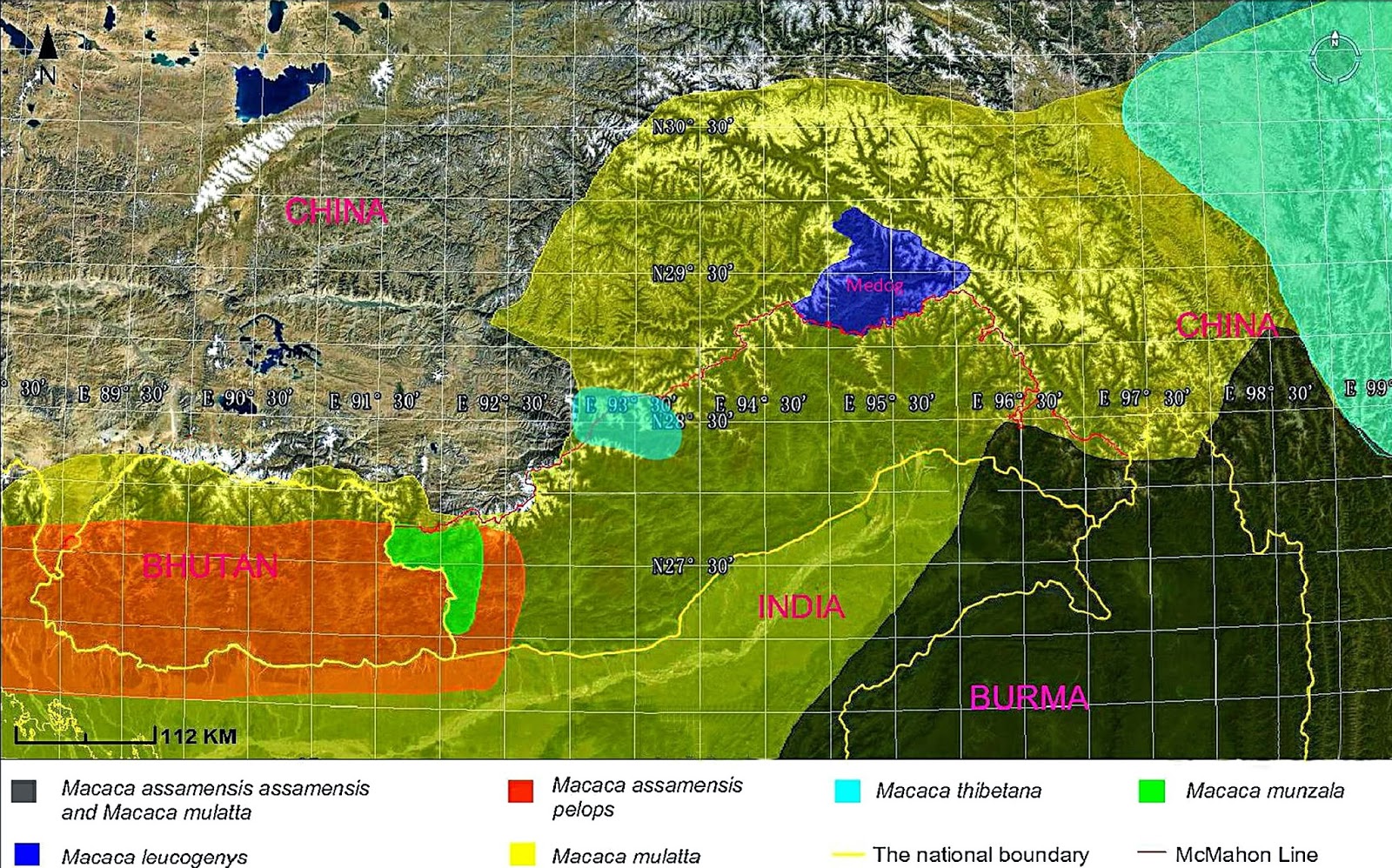 Map showing the rough distribution range of each species or subspecies of Macaca in southeast Tibet. Li et al. (2015).

At the moment all the forests of Modog County are protected by the Yarlung Zangbo Grand Canyon Nature Reserve, which prohibits destructive practices such as slash and burn agriculture. However local people in the area are known to kill Primates caught raiding crops, and also to occasionally actively hunt Macaques. More seriously the Chinese government is currently planning a series of hydroelectric dams in Modog County, including one which would completely flood the area where the White-cheeked Macaque. This threatens to directly destroy a large area of environment inhabited by the White-cheeked Macaque and other rare Primates, and in addition will bring a large number of workers into the area, which will lead to additional environmental disruption, by the building of roads, houses and other facilities for workers, as well as being likely to fuel a rise in the bushmeat trade in the area. Li et al. therefore call for more work to study and protect this important environment to be carried out as a matter of some urgency.

Number of Saki Monkey species raised from five to sixteen.
Saki Monkeys of the genus Pithecia are found throughout the tropical forests of South America. The taxonomy of the group is poorly understood, as species are often both variable and similar to other species...