(Relatively) recent volcanic activity in the Southern Highlands of Mars.

The planet Mars formed about 4.5 billion years ago, and is thought to have been highly volcanically active in its early history. However due to its smaller size it is thought to have cooled much more rapidly than the Earth, with volcanism ceasing in most areas by the end of the Noarchian Epoch (about 3.7 billion years ago), with activity persisting in areas such as the Hesperian ridged plains and Tyrrhenus and Hadriacus Montes till about 3.5 billion years ago. The youngest lavas in the two main Martian volcanic provinces, Tharsis and Elysium are thought to be low-viscosity basaltic lavas, i.e. lavas that reached the surface in a hot, runny state then cooled rapidly on exposure to the atmosphere. More viscous, evolved lavas (lavas that have risen to the surface slowly, cooling and losing minerals which crystalize at high temperatures) are thought to be rare on Mars.

The Terra Sirenum is a highland region within the proposed former Eridania paleolake, crossed by east-west trending radial graben-systems (longitudinal depressions caused by stretching and thinning of the Martian crust) which may be associated with unexposed volcanic dykes (intrusive volcanic lavas running forming horizontal channels), derived from Arsia Mons 3700 km away, as well a series of wrinkle-ridges interpreted as fault-propagation folds associated with deformation caused by contraction of the crust. 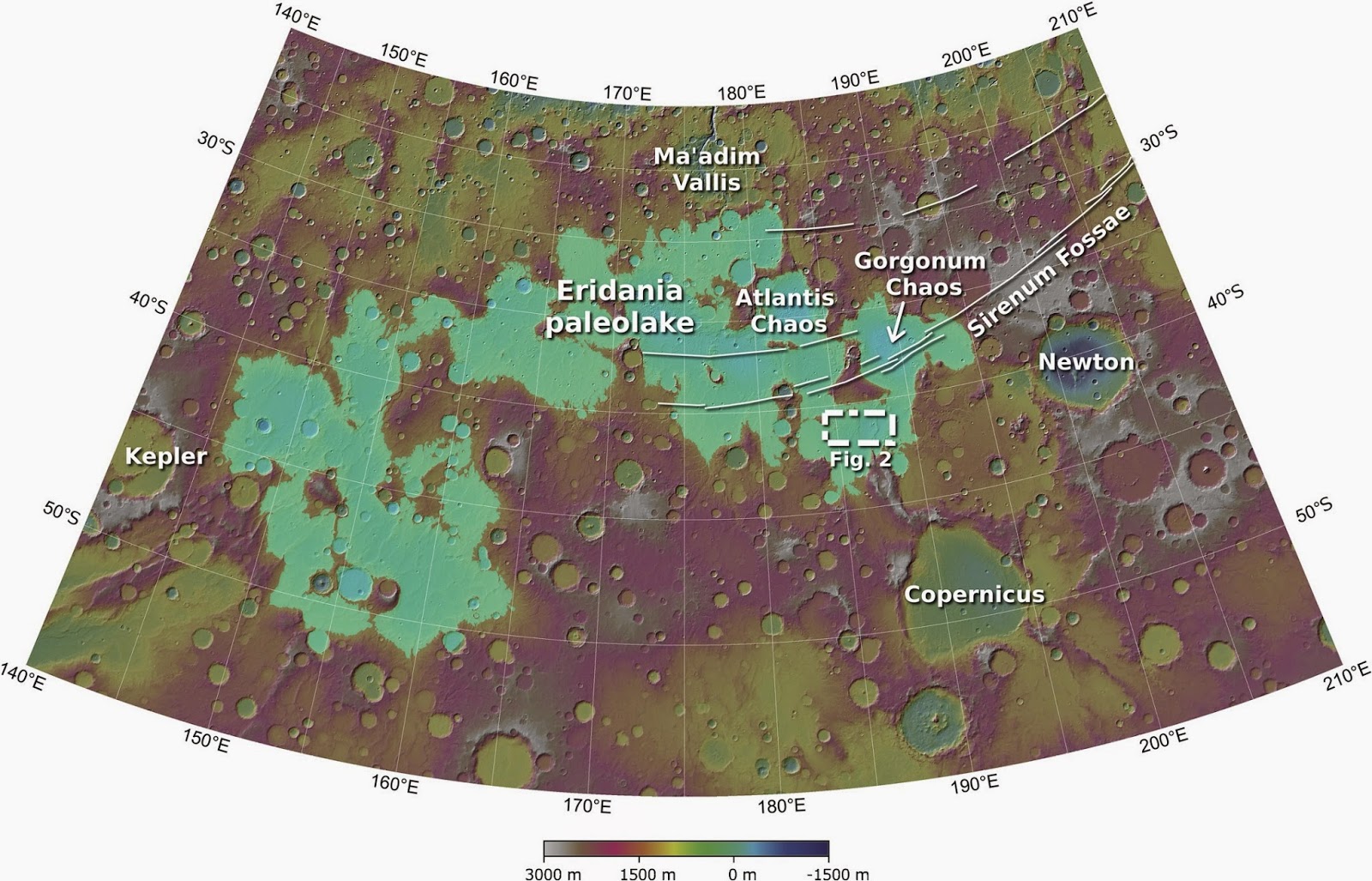 Regional map of part of the southern hemisphere on Mars. The cyan colordelineates the extent of the proposed Eridania Lake based on the 1100m contour. Position of investigated area is marked by dashed box and clearly the area lies inside the proposed borders of the former lake. Brož et al. (2015).

The putative volcanic structures lie within an unnamed depression measuring approximately 150 km by 30 km, with all bar one of these within a further depression located inside this. The volcanic structures comprise three volcanic domes (A, B & C), all located within the inner depression, with A and B located on different sinuous wrinkle-ridges, which rise tens of meters above the surrounding plains, and two volcanic cones (T1 &T2), with Cone T1 sitting outside the inner depression on the rim of an ancient, highly eroded impact crater, which is roughly 110 km in diameter, and Cone T2 within the inner depression. In addition there are four flows of apparent volcanic material associated with these structures (Flows 1-4). Flow 1 may originate from Cone T1, though this area is also intersected with other flows, thought to be related to a 6 km diameter impact crater rather than any volcanic structure, making its interpretation complex; Flow 2 is elongate and appears to originate from Dome A, Flow 3 is roughly circular and surrounds Dome B and Dome C, though its precise origin is unclear, and Flow 4 is again elongate and appears to originate from Cone T2. 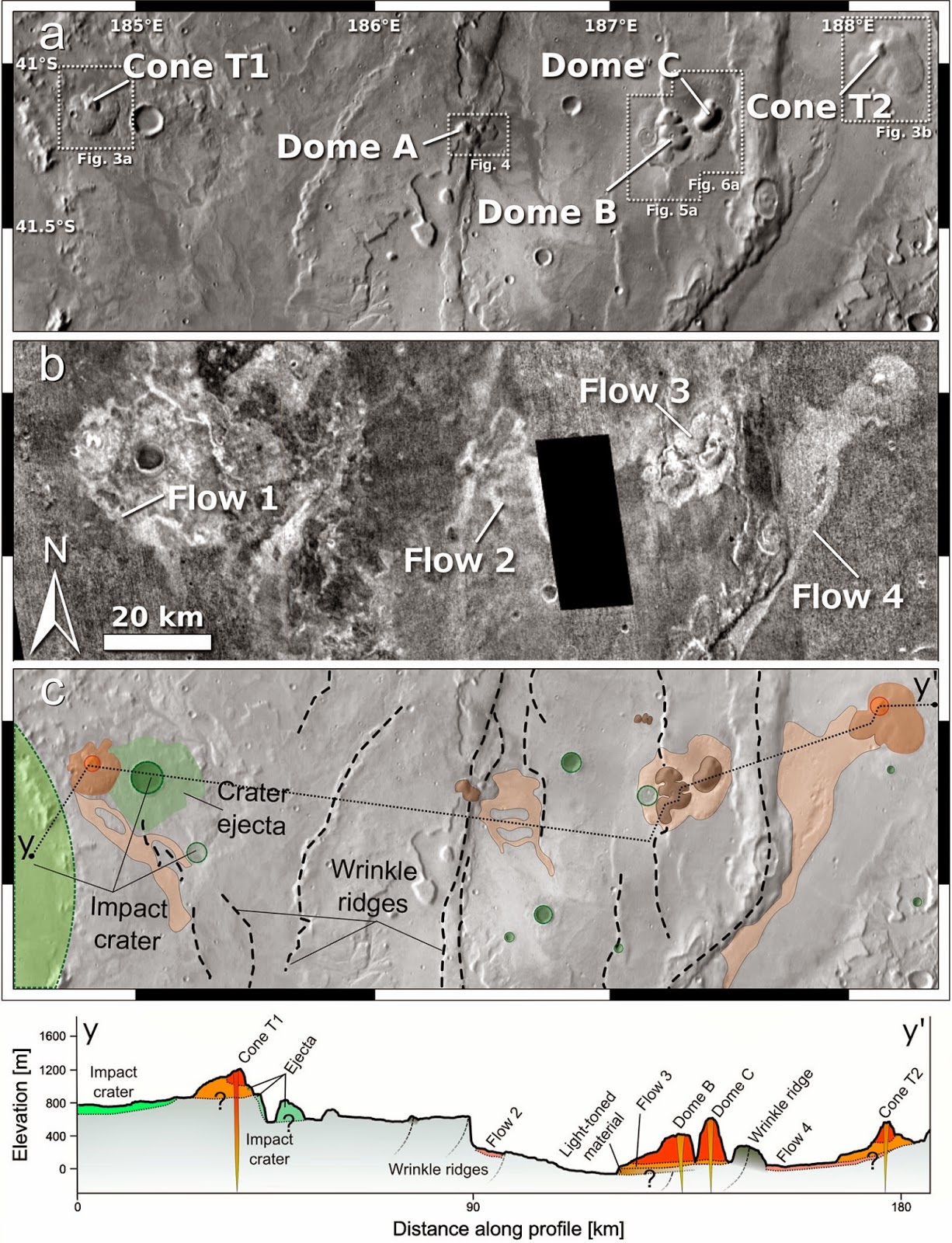 THEMIS-IR daytime (a), nighttime (b) and interpretational map of the study area (c). The thermal contrast between the two upper images (a, b) suggests the presence of flow structures associated with cones and domes. Note the wrinkle ridges crossing the basin. The cross-section shows the stratigraphic relations of the investigated edifices with underlying units. Brož et al. (2015).

Cone T1 is about 3 km in diameter and about 230 m in height. It is breached to the south, giving rise to a flow apron 8.5 km wide and 100-130 m thick, which partially covers the lower flanks of the cone. Two small impact craters, 1.3 and 0.8 km in diameter, are located on this flow apron. 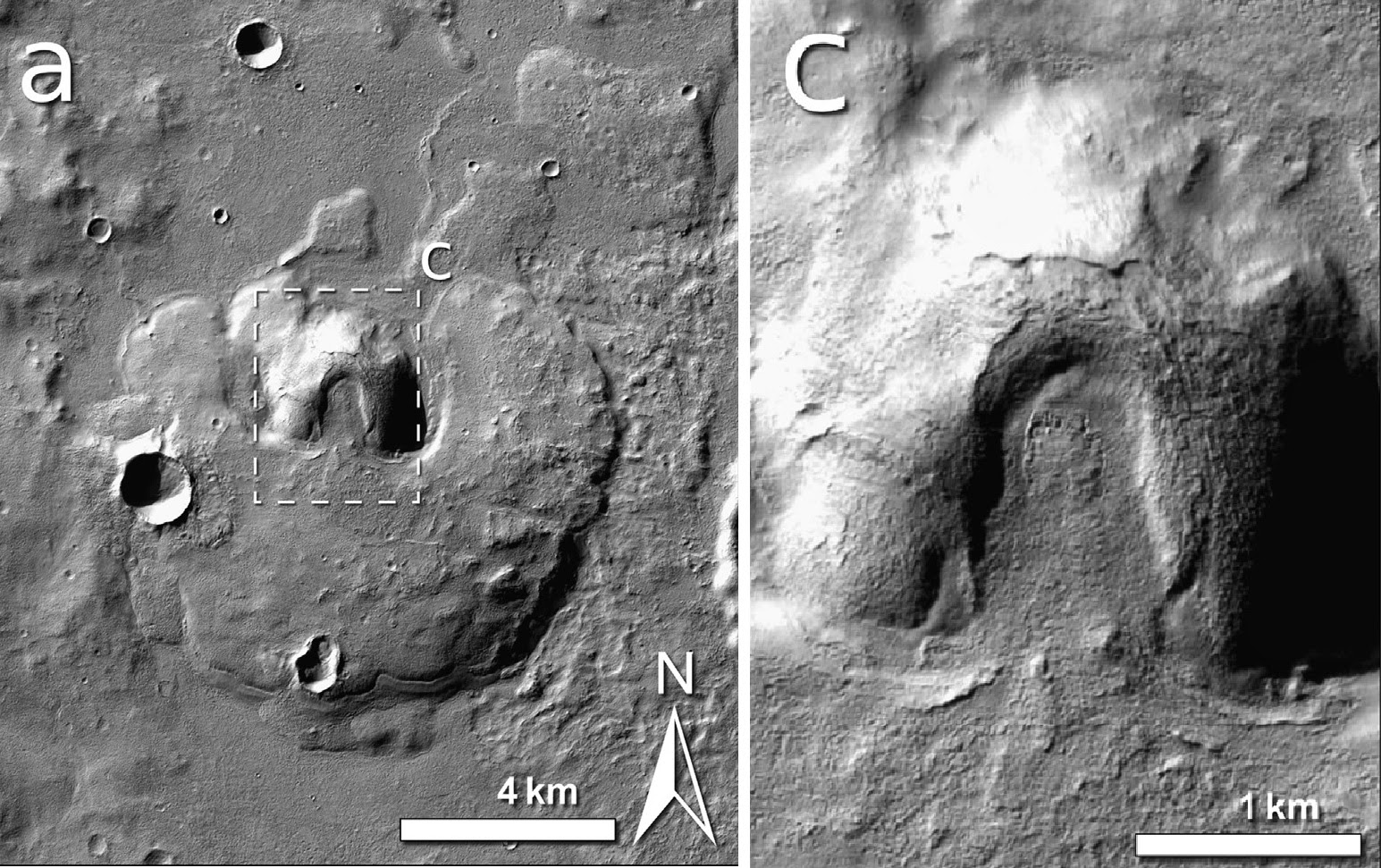 Cone T2 is about 3 km in diameter and 290 m in height, and breached to the east, giving rise to a flow apron measuring 12.5 km from north to south, with four distinct lobes. The margins of these lobes appear to overlap, suggesting that the apron was formed by multiple eruptive episodes. The source of Flow 4 lies beneath these aprons; Flow 4 appears to originate from Cone T2 and flows roughly 50 km to the southwest, measuring 1-8 km wide and 30-50 m thick; it appears to have originally flowed to the west then been deflected southward when it encountered a wrinkle-ridge.

Dome A is a 2.5 km diameter mound located on top of a wrinkle ridge. Flow 2, which is about 5 km long and about 300 m wide appears to originate from this dome and spread to the southeast. 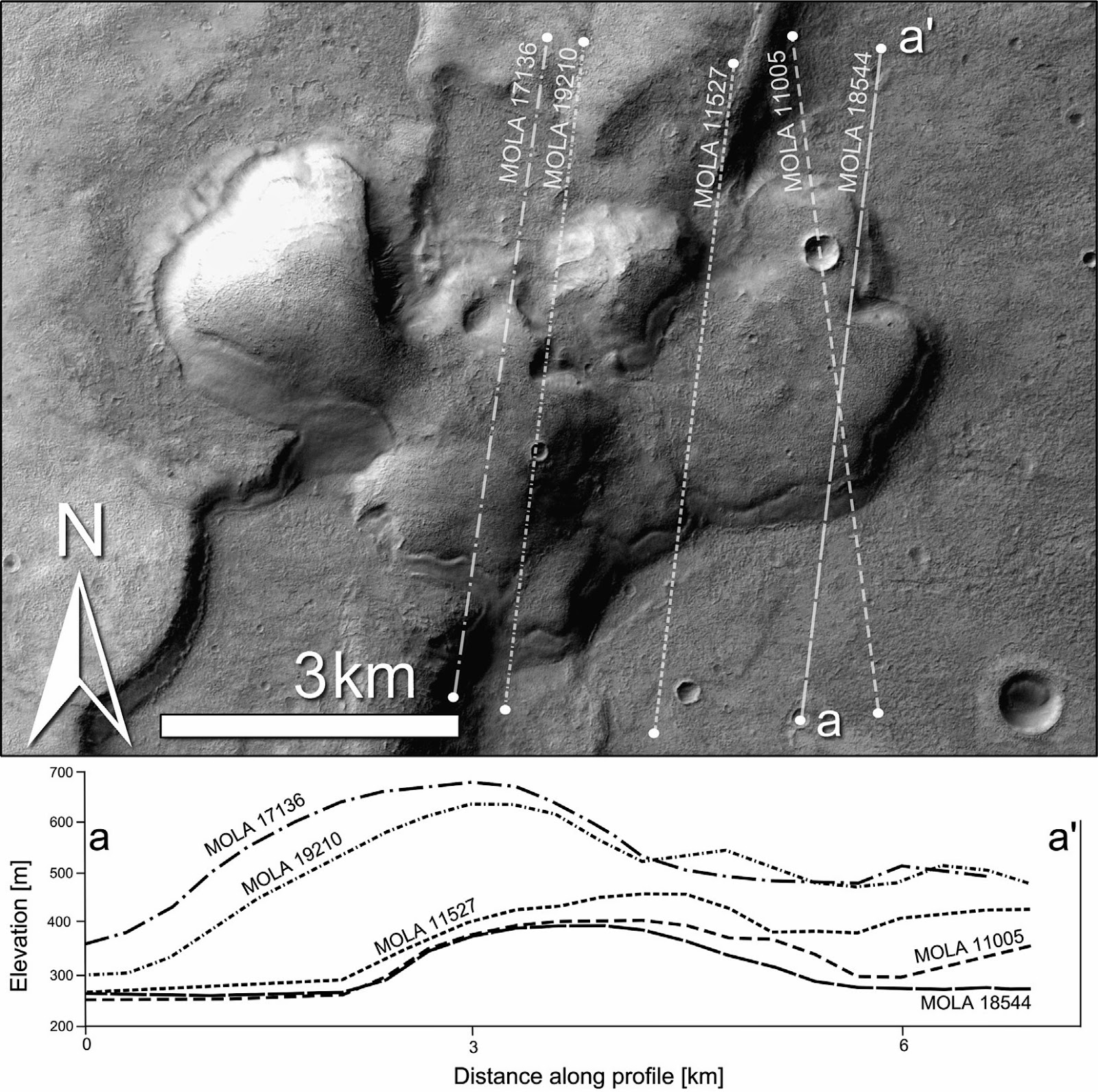 Dome B is approximately 5 km by 7 km and 390 m in height, being highest in the north. It is located on top of a wrinkle-ridge, and appears to extend some way to the south along the crest of this ridge. It is irregular in shape, with four deeply incised valleys dividing the dome into four portions. It is surrounded by flow features, some of which are shared with Dome C, superimposed upon surrounding terrain which appears to be a single ancient unit with a dense covering of impact craters. The western margin of the flow apron surrounding Dome B has a 3 km impact crater, largely infilled with debris; several smaller impact craters are also located on this apron, and on Dome B itself. 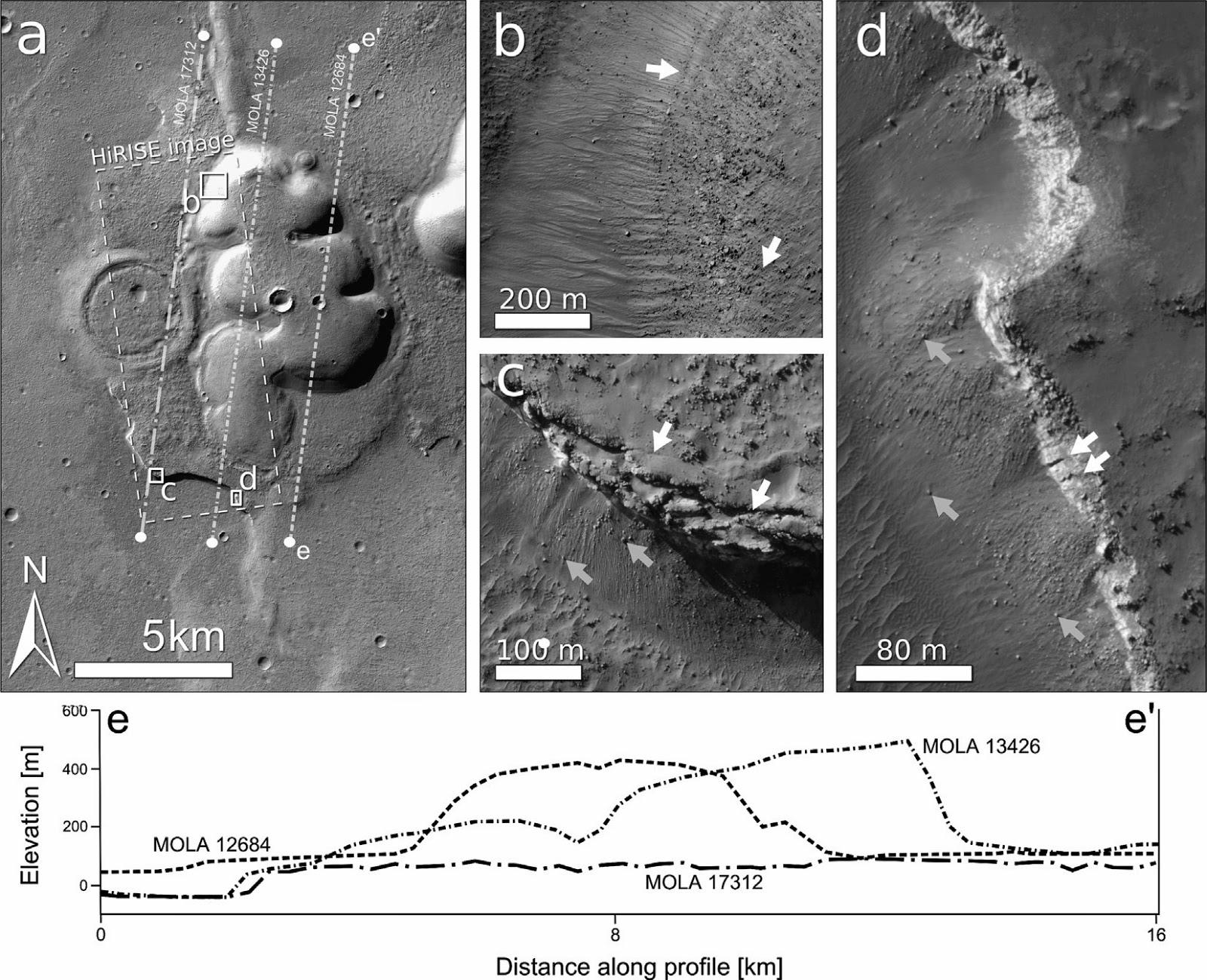 Image of Dome B with close up details. (a) Detail of Dome B and surrounding flow and marked position of HiRISE image ESP_033977_1385 with marked positions of MOLA PEDRs and associated topographic profiles. (b) Detail of HiRISE image showing the contact between the northwestern edge of the dome and the underlying unit. Large boulders forming the dome itself and aeolian deposits at the top of the dome together with modification by gully activities are clearly visible. (c) Detail of the bedrock on which Dome B is superposed as exposed by an ∼80mhigh scarp. Pristine fracture morphologies suggest ongoing scarp erosion. Note that the talus is mainly formed by fine-grained material and small amounts of boulders less than ∼6metres large (marked by gray arrows), larger blocks are missing. The tensile fractures parallel to the scarp in the capped unit (marked by white arrows) are similar to fractures associated with rotational block-fall landslides known from Earth. (d) Detail of HiRISE image showing another part of the scarp. Again, no large blocks of fallen rocks are visible and the talus is composed mainly of finer particles and smaller boulders (marked by gray arrows). Two white arrows indicate small grooves, which might have formed by ongoing aeolian erosion. These grooves show that the exposed material is susceptible to erosion. Brožet al. (2015).

Dome C is roughly 3.5 km by 6 km and 530 m in height, again being higher closer to its northern margin. 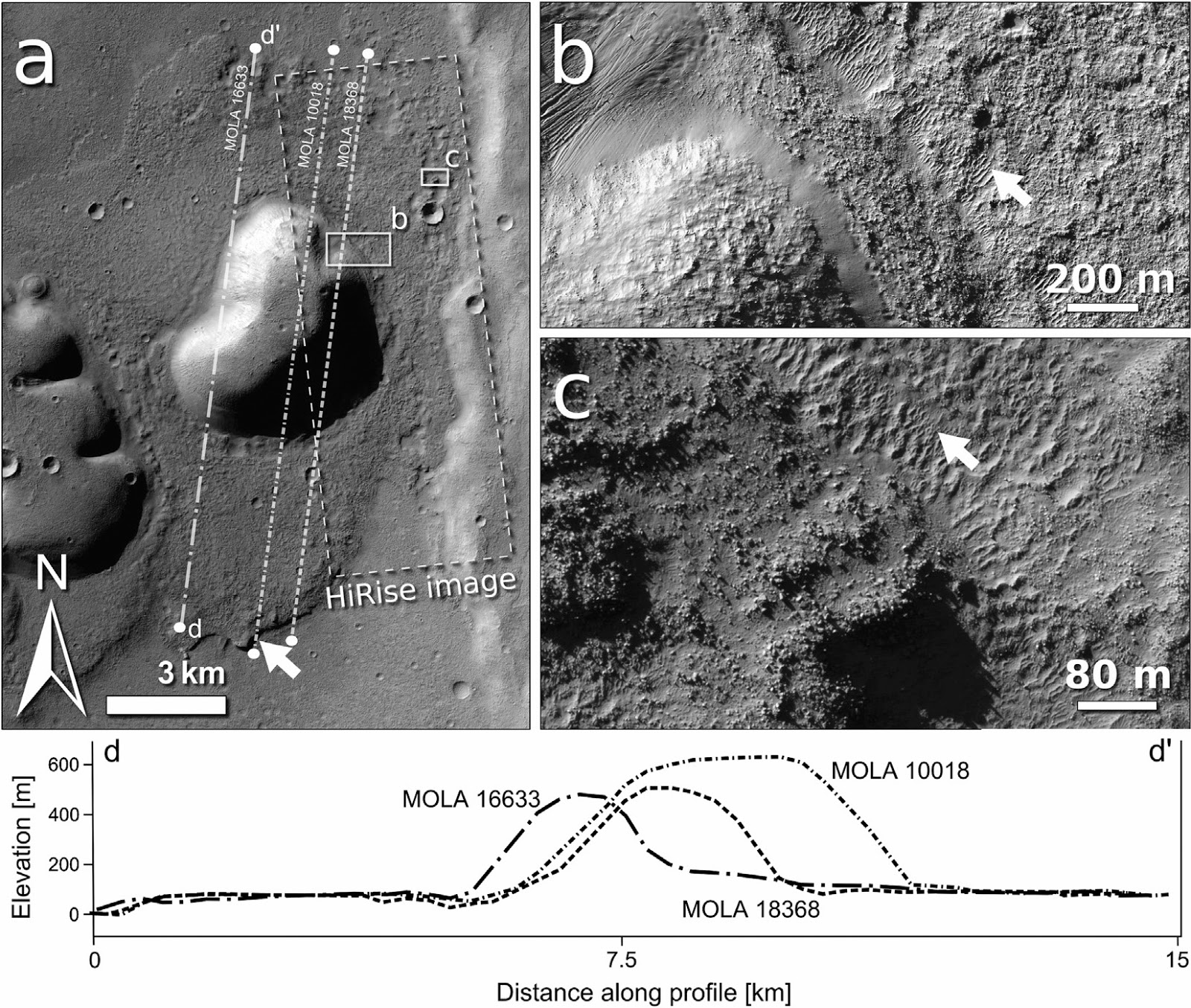 Image of Dome C and surrounding flow. (a) The dome edifice is clearly surrounded by a flow structure that has steep edges, as demonstrated by the shadows on the southern margin. White arrow marks scarp on the edge of Flow 3. Position of MOLA PEDRs marked by lines and HiRISE image ESP_026474_1385 marked by dashed rectangle. (b) Detail of HiRISE image covering part of dome flanks (left part of image b) and flow structure (right part). Note large boulders forming the dome itself and aeolian deposits forming Transverse Aeolian Ridges (marked by white arrow). (c) The edge of the flow structure on the border with surrounding older, flat layer. The margin of the internal flow is formed by large-scale boulders that are partly covered by aeolian material (marked by white arrow). The older unit contains small Transverse Aeolian Ridges. Brož et al. (2015).

The ages of deposits on other planets are usually worked out by measuring the density of impact craters on those deposits, since impacts are thought to have occurred at a steady rate for much of the history of the Solar System. However none of the volcanic deposits examined by Brož et al. were extensive enough to use of this method. Instead the ages of the deposits were worked out by their stratigraphic relationships with other deposits for which age estimates were available; this is possible because a rock formation must be younger than a bed lying beneath it and older than a bed laid down on top of it, enabling geologists to estimate the age of geological strata in the absence of direct data.

A spectrographical analysis of the mineral composition of exposed boulders on Domes D and C and Flow 3 suggests that these have compositions with low olivine abundances and moderate levels of pyroxene. Such mineral compositions are typical for terrestrial lava domes, and are associated with mature lavas; lavas that have been cooling for some time close to the surface before being extruded and have a distinctive mineralogical composition because of this (on smaller, chillier Mars such cooling may have occurred deeper within the planet). This is quite different from previous small volcanic structures recorded on Mars, such as scoria cones and tuff rings, which on Earth are typically formed by the eruption of younger, less viscous lavas. The margins of the flows are also quite steep, in places up to 20°, which is also indicative of more viscous mature lavas, and quite different from previously observed basalt flows in the Tharsis or Elysium volcanic provinces, which show very gentle flank slopes.

Hydrated silicate minerals in the Mariner Valley, Mars.
Hydrated minerals (minerals containing water) are considered to be evidence of the former presence of liquid water on Mars. They have been observed at a... 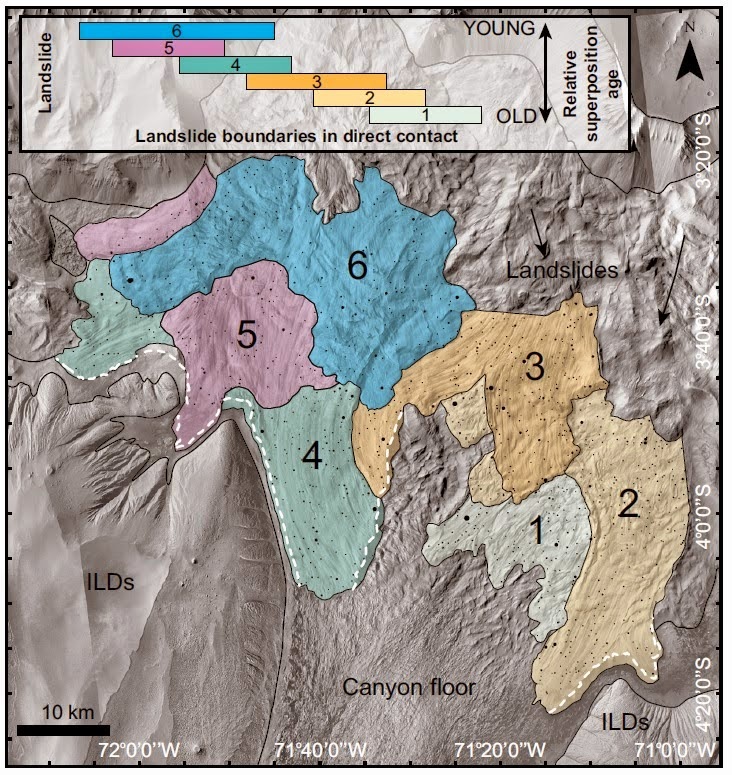 Interpreting landslide deposits in the Mariner Valley, Mars.
Landslides on Mars typically have much greater runout distances than those on Earth, due to the planets lower gravity and thinner atmosphere. This can lead to areas of layered deposits from different landslides quite distant from the source, particularly within the larger canyons on Mars. Since it is possible to produce approximate ages for such deposits based upon the number of impact... 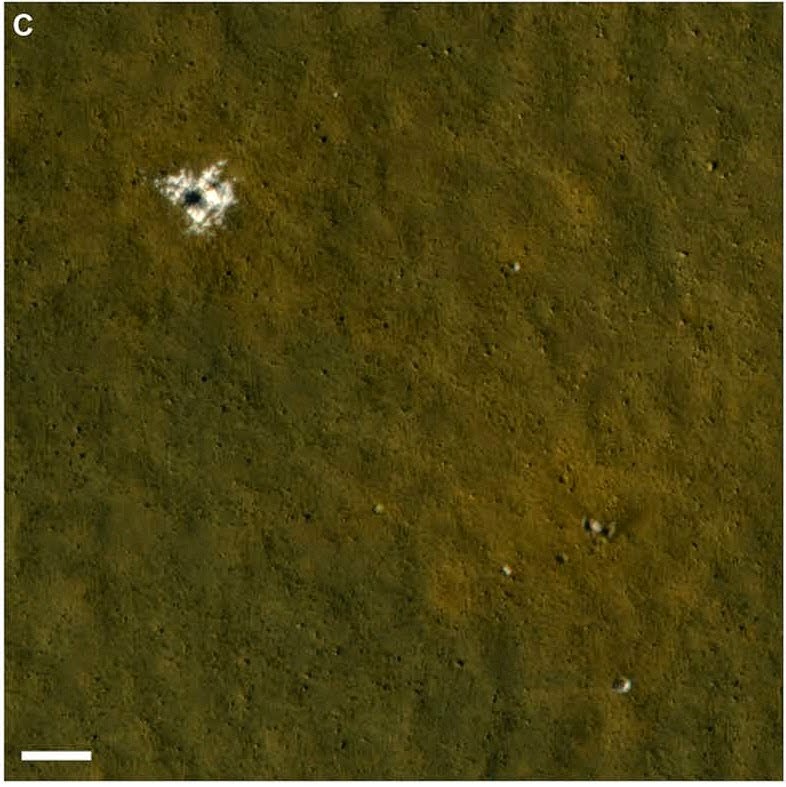 Ice in Martian impact craters.
The surface of Mars has been observed continuously by the Mars Orbiter Camera from 1997 to 2006 and the Mars Reconnaissance Orbiter since 2006. During the time that these observations have been occurring around 200 new impact craters have been observed on the surface of the planet; most of them in dusty areas, where they are easily detected due to the dark blast patterns that surround fresh impacts in these...
Follow Sciency Thoughts on Facebook.