Seven workers have ben confirmed dead following a flood at a mine near Datong in Shanxi Province, China, on Sunday 19 April 2015. The incident happened at about 6.50 pm local time at the Datong Coal Mine Group opperated Jiangjiawan Coal Mine, while there were 247 workers bellow ground. Since this time  223 workers have been evacuated from the mine safely, meaning that in addition to the seven confirmed deaths a further seventeen miners are still missing. 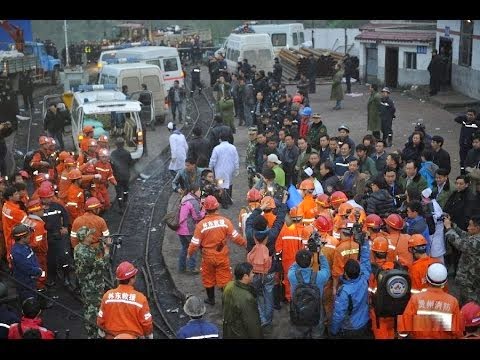 Miners being evacuated from the Jiangjiawan Coal Mine in Shanxi Province following a flood on 19 April 2015. World News.

The incident was reportedly caused when an accumulaion of water in a disused mine tunnel broke through into a mine still being operated. The mine reportedly comprises a number of smaller mines, some of which were previously operated illegally (i.e. without license or offical permission), which have been brought under the mining groups control and are now operated as one unit. It is possible that the company was not aware of the flooded mine shaft as accurate records of excavations are seldom kept at illegal mines.