Debris disks are rings of dust, rock and icy material left surrounding stars after planet formation has occurred (unlike protoplanetary disks, which are present around very young stars only, and which are thought to be largely consumed by planetary formation). Our Solar System has two such debris disks, the Asteroid Belt and the Kuiper Belt, and in recent years improved telescope technology has allowed astronomers to detect debris disks around about 80 of other stars. Most of these disks have been detected only at infrared wavelengths; imaging disks at visual wavelengths enables astronomers to study the morphology and composition of such disks in far greater detail, enabling them to predict the presence of planets that cannot be directly detected and better understand planetary formation around other stars.

Almost all debris disks that have been discovered to date have been found around larger stars. There are several possible reasons for this. Firstly the majority of smaller stars are thought to form in dense star clusters (i.e. very close to other forming stars), which may prevent the formation of such disks. Smaller stars also tend to be less stable, prone to larger and more frequent stellar flares, tending to have higher stellar winds and stronger magnetic fields, all of which may potentially disrupt any debris disks, causing them to dissipate early in the history of such stellar systems. Alternatively such disks may actually be fairly common around smaller stars, but mostly be bellow the level of detectability due to the lower levels of heat and light emitted by smaller stars and the smaller size of the systems in general.

In a paper published on the arXiv database at Cornell University Library on 7 December 2015, a team of scientists led by Élodie Choquet of the Space Telescope Science Institute, describe four new debris disks discovered around small nearby stars Hubble Space Telescope images, the Archival Legacy Investigation of Circumstellar Environments (ALICE) project, which uses the Karhunen-Loeve Image Projection (KLIP) algorithm (better software) to analyse old images for debris disks that may not have previously been discovered. 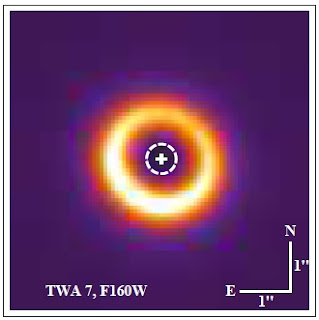 The second star examined was TWA 25, an M0.5 star (Red Dwarf Star with  less that 50% of the mass of the Sun) 54 parsecs (176 light years) from out Solar System. TWA 25 is also associated with the TW Hydrae moving group, and is estimated to be about 13 million years old. The Herschal Space Observatory failed to find any evidence of a debris disk around TWA 25, though the Wide-field Infrared Survey Explorer (WISE) space telescope did record an excess of infrared at some wavelengths, which can be an indication of such a disk. Choquet et al. found an inclined disk around TWA 25, edge on from our perspective and about 78 AU from the star. 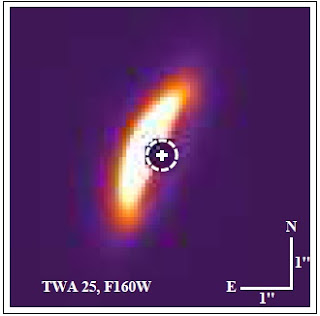 The third star examined was HD 35650, a K6V star (Orange Dwarf Star with less than 80 of the mass of the Sun) roughly 18 parsecs (58.7 light years) from our Solar System. HD 35650 is thought to be associated with the AB Doradus moving group, which is thought to be between 50 and 200 million years old. The Spitzer Space Telescope detected an excess of infrared radiation at a wavelength of 70 μm, but not at 24 μm, which it is thought may indicate a debris disk with a temperature of 60K. Choquet et al. were able to detect an asymmetric disk at about 54 AU from the star, 70% brighter on the north side than the south. This disk appears to be compressed along its northwest axis, possibly due to the system moving into a denser area of interstellar medium. 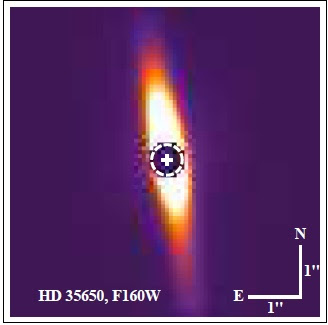 The final star looked at was HD 377, a G2V star (a stat with roughly the same mass as the Sun), approximately 39.1 parsecs (127.5 light years) from the Solar System. It this instance the Spitzer Space Telescope detected an infrared excess at 24 μm to 160 μm, the WISE space telescope at 22 μm and the James Clark Maxwell Telescope at 850 μm. This was thought likely to be indicative of two debris disks, one with a temperature of 240 K at a distance of 2.4 AU and one with a temperature of 57 K at 136.4 AU. Choquet et al. were able to detect a single debris disk, at a distance of 86 AU from the star. 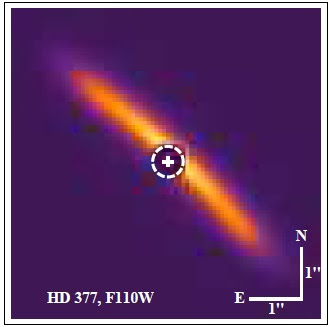 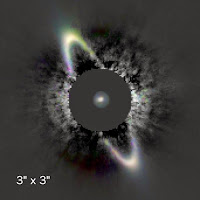 The debris disk around HD 4796 A.             The term debris disk is applied to any ring of sub-planetary sized objects around a star. In our Solar System both the Main Asteroid Belt and the Kuiper Belt would qualify as debris disks, though in practice neither of these belts would be detectable around another star with current technology. However younger star systems often have much more detectable debris disks, containing extensive fields of dust from... 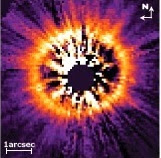 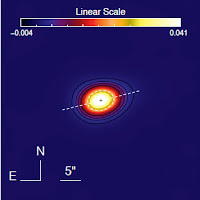 The debris disk of 49 Ceti.                            49 Ceti is a bright star in the constellation of Cetus, 194 light years from the Earth, with a mass slightly over 2 times that of the Sun. It is a young star, only about 40 million years in age, and is surrounded by a large debris disk, which has been shown to be rich in Carbon Monoxide. In an system this old it would generally be assumed that such a disk was made of comet-type bodies, with the detectable free Carbon Monoxide...
Follow Sciency Thoughts on Facebook.
Posted by Joe Bauwens at 22:31