Prunus kunmingensis: Peaches from the Late Pliocene of Yunnan Province.

Peaches, Prunus persica, are widely grown and consumed fruit around the world today, with a total annual production of about 20 million tons. They have a long historical association with humans, particularly in East Asia, with the oldest known archaeological specimens from 7000-8000 year-old sites in China and Peaches being mentioned in Chinese literature from about 1100 BC onwards. However today all known populations of Peaches are domesticated; no similar species is known from the wild, nor been documented in the fossil record. This makes it unclear to what extent modern Peaches resemble their wild ancestors and how much they have been modified by cultivation.

The specimens comprise eight Peach endocarps (stones), apparently identical to those of modern Peaches. This being the case extreme care had to be taken to exclude the possibility of modern contamination. examination of the specimens determined that much of the original woody material had been replaced by iron oxides; attempts to obtain carbon-14 dates from the surviving woody material found them to be beyond the range of this method (about 43 500 years), effectively excluding the possibility of the specimens being modern. The specimens were slightly flatter than modern Peach stones, but this is thought to be a result of compression after burial, however due the presumed age of the specimens they are assigned to a new species, Prunus kunmingensis (meaning 'from Kungming') rather than to the modern Prunus persica. 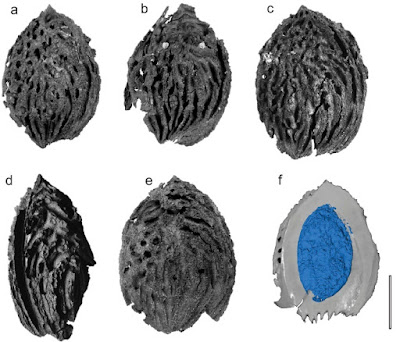 The discovery of the Kungming Peaches strongly suggests that Peaches with an essentially modern form have existed long before Humans domesticated them; modern Humans arrived in China  in the Late Pleistocene and are not thought to have started cultivating crops for some time after. The earlier Homo erectus, who are not thought to have practiced agriculture of any kind, appeared in East Asia about 1.9 million years ago, or about 700 000 years after the end of the Pliocene, indicating that Peaches predate even this species of human. It is therefore likely that Peaches relied upon a large non-human Mammal to spread their seeds before the arrival of Humans in the area, possibly some form of Ape.

Other fossil material from the same beds as the Peach specimens indicate that the climate of Kunming was warmer and wetter in the Late Pliocene, which is in keeping with what is predicted from climatic models for the period. The Ciying Formation has produced numerous acorns of Ring-cupped Oak, Quercus glauca, a species today found in tropical and subtropical forests in Asia. These forests are a biodiversity hotspot for fruit bearing Rosaceae trees today, with Apples, Almonds, Apricots, Cherries, Plums and Pears all thought to be native to such forests. The addition of Peaches to this list adds to the importance of these forests as a source of fruit crops utilized by Humans. 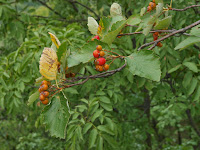 A new species of Whitebeam from the Transdanubian Mountains of Hungary.       Trees and shrubs of the genus Sorbus are variously known as Rowans, Service Trees, Whitebeams and Mountain Ashes. They are members of the Rose Family (Rosaceae), found in Europe, Asia, North America and North Africa. The group contains between 100 and...

A new species of Cherry from central Zhejiang Province, China.                                    Cherries are flowering fruit trees in the genus Prunus, members of the Rose Family (Rosaceae), found across much of the Northern Hemisphere, related to Plums, Peaches, Apricots and Almonds. Many species...
Follow Sciency Thoughts on Facebook.
Posted by Joe Bauwens at 21:21