Iocrinus africanus: A new species of Crinoid from the Middle Ordovician of Morocco.

The Ordovician was a period of rapid diversification and geographic expansion in many Echinoderm groups, including Crinoids. However their fossil record is not good in every area, making understanding this period in their evolutionary history difficult. The northern Gondwanan continental shelf was an important area for migrating marine organisms in the Ordovician, forming the closest part of the closest part of the Gonwanan shelf to the continents of Baltica and Laurentia. Deposits laid down on the northern Gondwanan margin in the Ordovician outcrop in northwest Africa and southwest and central Europe today, but relatively few Crinoids are found from these deposits, furthermore most of these that are members of groups with very localized distributions, making it hard to understand Crinoid migration patterns.

In a paper published in the journal Peer J on 7 December 2015, Samuel Zamora of the Instituto Geológico y Minero de España, Imran Rahman of the School of Earth Sciences at the University of Bristol and and William Ausich of the School of Earth Sciences at Ohio State University describe a new species of Iocrinid Crinoid from the Middle Ordovician Taddrist Formation of the Anti-Atlas Mountains of Morocco.

The new species is placed in the genus Iocrinus and given the specific name africnus, meaning 'African'. It is described from a single articulated specimen, almost complete but lacking its attachment structure. This is preserved in a carbonate concretion and has only been partially freed from the rock, with details of the unexposed and internal structure being studied by computerized x-ray tomography.  Iocrinus africanus has a small cup-shaped body with a stalk on the central part of its underside and five arms arranged around its rim, which branch up to eight times. If the stalk is similar to that in other members of the genus then it would have been a prehensile tail-like structure that could be coiled around objects on the seafloor. 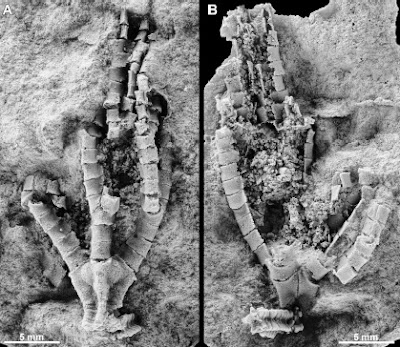 Iocrinus africanus from the Darriwilian (Middle Ordovician) of Morocco. (A), (B) General morphology including the complete crown showing the E-ray (A) and BC-interray (B). Images are photographs of latex casts of the specimen whitened with ammonium chloride sublimate. Zamora et al. (2015).

This is only the second possible species of Iocrinus from the Ordovician of Gondwana, with a possible specimen previously reported from Oman, though the genus is well reported from Laurentia and Avelonia. Members of a second Iocrinid genus, Merocrinus, are known from Gonwana, Laurasia, Avalonia and Baltica. 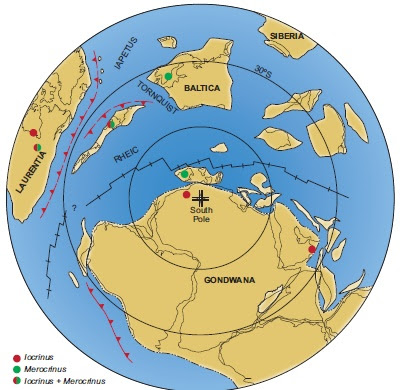 Distribution of the major paleocontinents during the Middle Ordovician, showing the known geographical distribution of Iocrinus and Merocrinus. Locality markers indicate the presence of a taxon on a palaeocontinent; multiple localities are not noted on a single palaeocontinent. Zamora et al. (2015).

A mass death of Starfish in the Late Cretaceous of Morocco.                           Starfish (Asteroidea) are benthic marine Echinoderms found across the globe. They have a simple bodyplan, with a central disk that has the mouth on the underside, surrounded by (usually) five arms, each with...