Partial Dromaeosaur remains from the Early Cretaceous of Inner Mongolia.

Dromaeosaurs are thought to have been the Dinosaur group most closely related to the earliest Birds, making them of great interest to palaeontologists.. Unfortunately this also means that for the most part they were small and rather fragile animals, which limited their preservational potential. Thus Dromaeosaur fossils are both highly sought after and extremely rare. That said the group is known from across the Northern Hemisphere, with Dromaeosaurs having been found in Europe, Asia and North America, as well as Africa and South America in the southern hemisphere. All currently known Dromaeosaur fossils date from the Cretaceous, though the group are inferred to have arisen in the Jurassic by their close relationship to Birds.

In a paper published in the journal PeerJ on 7 December 2015, Michael Pittman and Rui Pei of the Department of Earth Sciences at the University of Hong Kong, Qingwei Tan of the Long Hao Institute of Geology and Paleontology and Xing Xu of the Institute of Vertebrate Paleontology & Paleoanthropology of the Chinese Academy of Sciences describe a set of partial Dromaeosaur remains from the Early Cretaceous Bayan Gobi Formation of Inner Mongolia.

The specimen comprises a partial left hindleg preserved on a split slab and its counterpart, with the distal portion of the femur, tibia and fibula preserved along with most of the bones of the foot. This is not considered to be sufficient to describe the remains to species level, but appears to have come from a Microraptor-like Dromaeosaur with a mass of less than 1 kg. 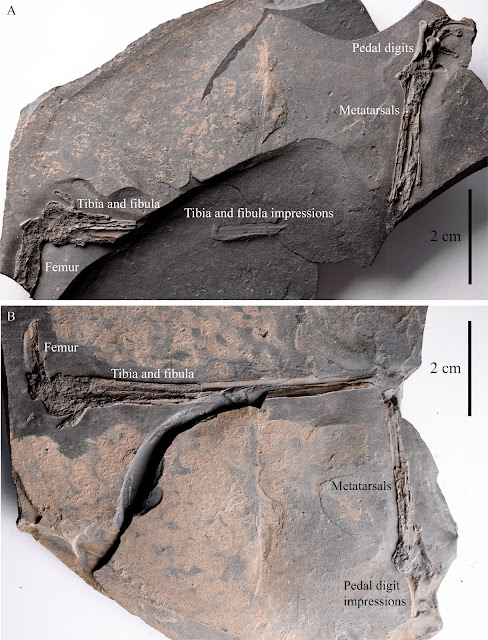 The slab also contained an isolated manual ungual (claw from a forelimb) about 16 mm in length and strongly arched. This clearly comes from a Theropod, and almost certainly from a Dromaeosaur about the same size as the one that produced the leg, though it cannot be said with absolute certainty that it came from the same individual. In addition a portion of a right rib, again almost certainly from a small Dromaeosaur was found on the slab, as well as a bone mass comprising numerous small fragments of unidentified bone. 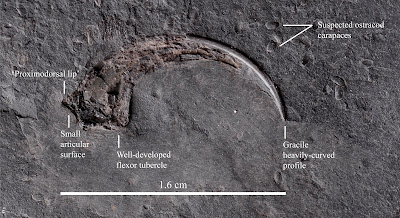 The Bayan Gobi Formation is interpreted as having formed in an inland basin far from the sea, with a cool climate and a system of lakes. ponds and rivers. It has previously produced a diverse assemblage of fossils including Flowering Plants, Conifers, Podocarps, Ostracods, Bivalves, Osracods, Mammals, Champsosaurs (semi-aquatic Diapsids of uncertain affinities), and three previously described Dinosaurs, the Psittacosaurid Ornithischian Psittacosaurus gobiensis, the Hadrosauroid Ornithischian Penelopognathus weishampeli, and the Therizinosauroid Theropod Alxasaurus elesitaiensis. The Dromaeosaur remains are not sufficient to identify the specimen to species level, but they do indicate that Dromaeosaurs were present, increasing both the known diversity of the Bayan Gobi fauna and the known range of Dromaeosaurs as a group, and leaving the hope of finding more complete specimens of the group in the formation in the future, 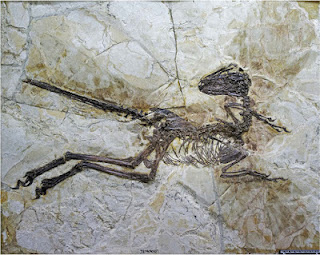 Zhenyuanlong suni: A large feathered Dromaeosaur from the Jehol Biota.  Dromaeosaurid Dinosaurs are among the closest non-Avian relatives of the Birds and show many similarities to the earliest members of that group, making understanding Dromaeosaurs important for understanding the origin of Birds. In particular...

A new specimen of Microraptor from western Liaoning Province, China.
In December 2000 Xing Xu, Zonghe Zhou and Xioalin Wang of the Institute of Vertebrate Paleontologyand Paleoanthropology of the Chinese Academy of...

Dinosaur footprints from the Early Cretaceous of Ganzu Province, China.        The Deinonychosaurs are the group of dinosaurs most closely related to the birds. They are divided into two groups, the Dromaeosaurs (popularly known as 'Raptors') and the Troodontids, which share a...
Follow Sciency Thoughts on Facebook.