Toxicocalamus ernstmayri: A new species of Worm-eating Snake from the Star Mountains of Papua New Guinea.

Worm-eating Snakes, Toxicocalamus, are Elapid Snakes known from Papua New Guinea and some nearby island groups. They are burrowing Snakes, which get their name from their habit of eating Oligochaete Earthworms. There are currently eleven described species, though this is thought to be an underestimation, with the most numerous species currently described, Toxicocalamus loriae, thought likely to be a cluster of similar species and other unknown species likely to be dwelling in underexplored areas of Papua New Guinea.

In a paper published in the Bulletin of the Museum of Comparative Zoology on 26 July 2015, Mark O'Shea of the West Midland Safari Park and the Faculty of Science and Engineering at the University of Wolverhampton, Fred Parker of Townsville in Queensland, Australia and Hinrich Kaiser of the Department of Biology at Victor Valley College and the Department of Vertebrate Zoology at the National Museum of Natural History, describe a new species of Worm-Eating Snake from the Star Mountains in Western Province, Papua New Guinea.

The new species is named Toxicocalamus ernstmayri, in honour of the ornithologist and evolutionary biologist Ernst Mayr, It is described from a single specimen killed by a local resident at Wangbin village in the Star Mountains in December 1969 and subsequently obtained by Fred Parker on behalf of the Museum of Comparative Zoology at Harvard University. The specimen was originally described as a specimen of Micropechis ikaheka, the New Guinea Small Eyed Snake, but re-examination of the specimen revealed it to be a previously unknown species of Toxicocalamus. The specimen is female, and larger than any previously described species in the genus, at 120 cm, and has a distinctive pattern of scales (usually a reliable way to identify species of Snakes). It was blackish in life with bright yellow markings, but has faded to a dull brown colour in preservative since death.

The discovery that the specimen is a Worm-eating Snake helps to shed some light upon the diet of the group. Most members of the genus are quite small, but the largest members, like Toxicocalamus ernstmayri, can exceed a meter in length, and a diet of Earthworms seems highly unlikely for such large snakes, particularly as they are highly venomous and apparently would be more than capable of subduing small Vertebrate prey. However no member of the genus has ever been found with a vertebrate among its stomach contents, and captive Worm-eating Snakes have refused all food other than Earthworms.

The single specimen of Toxicocalamus ernstmayri was examined for stomach contents when it was first obtained, with one Earthworm and one parasitic Nematode being found. As this is the largest Worm-eating Snake specimen known to have been examined, this finding strongly supports the theory that despite all members of the genus rely almost entirely on a diet of Earthworms.

Ancestor of all modern Snakes more likely to have been a burrower than a swimmer.    Snakes are one of the most successful groups of living vertebrates, with over 3000 living species found in all but the very coldest environments on Earth. Modern snakes exhibit a wide range of habitat preferences, from...

Acanthophis cryptamydros: A new species of Death Adder from the Kimberly Region of Western Australia and the Northern Territory. Death Adders, Acanthophis spp., are Australian Snakes closely resembling the Old World Vipers, though they are Elapid Snakes more... 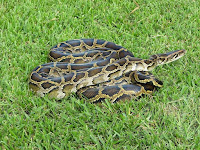 Experimental evidence suggests Burmese Pythons are responsible for the rapid decline of Mammals in the Everglades National Park. Burmese Pythons, Python molurus bivittatus or Python bivittatus, are large predatory Snakes from Southeast Asia. They are thought to have been introduced to...