Painted Frogs from the Middle Miocen of Jammu and Kashmir, India.

Painted Frogs, Discoglossinae, are found today in Southern Europe and the Mediterranean Basin, with fossils known from a number of Tertiary European sites. However the group are thought to be ancient and a specimen has been described from the Cretaceous of Wyoming while a member of the closely related Midwife Toads, Alytinae, which are also restricted to Europe and the Mediterranean Basin today, has been found from the Cretaceous of Central Asia, suggesting that the group was once widespread.

In a paper published in the International Research Journal of Earth Sciences on 24 September 2014, Varun Parmar and T Jigmet of the Post Graduate Department of Geology at the University of Jammu describe a series of Painted Frog remains from the Middle Miocene Lower Siwalik deposits of Jammu and Kashmir.

The Siwalik deposits were laid down from the Middle Miocene to the Late Pleistocene in the sedimentary basin formed across northern India by uplift in the Himalayas (i.e they were formed by material eroded from the rising mountains). The deposits run across northern India from river Indus in the west to the Brahmputra gorge in the east.

Parmar and Jigmet collected about 200 kg of sediment from Dehari near Jammu and first broke the rocks manually into small pieces, then dried them in an oven to remove all moisture. The samples were then soaked in kerosene oil for 3-4 hours, then water for about two hours. This breaks up the sediment as first oil then water enter the sediment, as the oil is hydrophobic (does not mix with water), so the water pushes the oil out. Because the two fluids have very different physical properties this results in agitation in even the smallest pores in the rock, causing the rock to disintegrate and exposing small fossils that can be recovered by sieving.

This procedure recovered numerous small specimens, including teeth and bones from Fish, Crocodiles, Snakes and small Mammals, as well as Mollusc shells and plant remains. The Frog remains comprised of four almost complete ilia (bones from the pelvis) attributed to an unknown Discoglossine (Painted) Frog; the remains are not considered sufficient to assign the specimens to genus or species level. 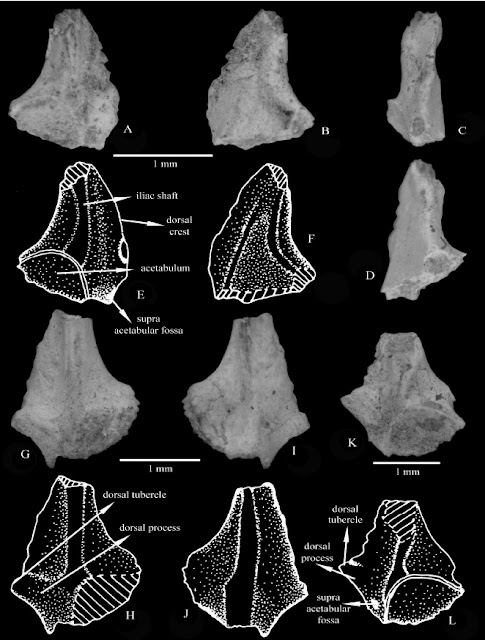