Albanerpetontids, Frogs and Lizards from the Late Cretaceous of northeast Spain.

During the Late Cretaceous high sea levels split Europe up into a series of islands, each with its own distinctive fauna, with fossils from different parts of Europe show affinities to those from other continents, notably Asia, North America and Gondwana (Africa & South America). In recent years larger fossil vertebrates, such as Dinosaurs, Pterosaurs, Crocodiles and Turtles, have been extensively studied in Iberia, but less attention has been paid to smaller vertebrates, which are often important when trying to assess connections between faunas of different regions.
In a paper published in the journal Cretaceous Research on 30 July 2015, Alejandro Blanco and Arnau Bolet of the Institut Catalàde Paleontologia Miquel Crusafont at the Universitat Autònomade Barcelona, Hugues-Alexandre Blain of the Institut Catalàde Paleoecologia Humana i EvoluciòSocial and the Area de Prehistòria at the Universitat Rovira i Virgili, and Víctor Fondevilla of the Departament de Geologia (Estratigrafia) at the Universitat Autònoma de Barcelona describe a series of fossils of smaller vertebrates from four exposures of the Late Cretaceous Tremp Formation of northeastern Spain. The Tremp Formation comprises a series of beds laid down on a floodplain with a meandering or braded river, occasional isolated lakes and marine influences in places.

The first fossils examined dome from the Serrat del Rostiar-1 locality, where the exposure composes grey mudstones with pedogenic nodules which represent portions of fossilized soil, thought to have formed on the floodplain close to a meandering river (represented by sandstone deposits).

This site has produced a partial frontal bone (part of the skull) and three humerus fragments assigned to an unknown Albanerpetontid, an extinct group of Salamander-like Lisamphibians with bony scales, known from the Middle Jurassic to the End Pliocene of Europe, North America and (in one case) Morocco, and which have previously been recorded from several sites in Iberia.

This site also produced a fragment of right and two left illia, a partial scapula, a fragment of humerus and one whole and one partial vertebrae assigned to an unknown Painted Frog, Discoglossinae, a group of Frogs found today in southern Europe, North Africa and Israel. The earliest known fossil assigned to this group comes from the Jurassic of Spain, and Cretaceous specimens have previously been described from Spain, Romania and Wyoming. The site also produced one fragment of ilium assigned to an unknown Alytine Frog (Midwife Toad). 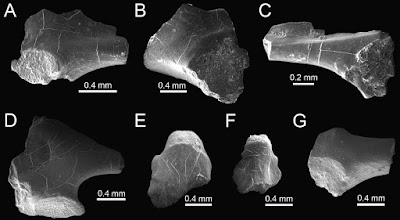 Serrat del Rostiar-1 also produced fragment of an urostyle, the epiphysis of a radioulna, two partial vertebrae and some tibiofibular and radioulnar fragments assigned to unknown Frogs. 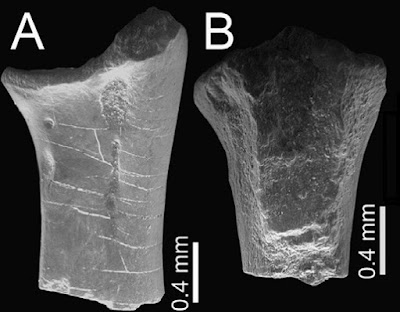 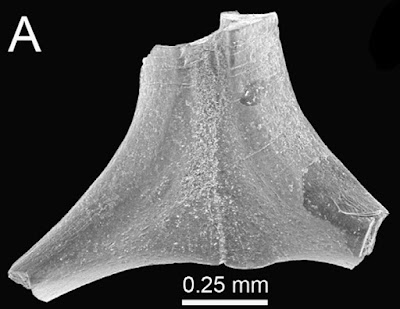 The Serrat del Rostiar-1 site also produced three tooth-bearing jaw fragments tentatively assigned to ab unknown Skink. Skinks first appeared in the Jurassic and by the end of the Cretaceous appear to have been distributed across Europe, Asia and North America. In Europe they have been previously described from the Late Cretaceous of Spain, France and Romania.


This site also produced a single vertebrae of a possible Anguid (Glass) Lizard. Anguids appeared in the Late Cretaceous of North America, and while common in parts of that continent by the end of the period, are not previously known in Europe till the Cainozoic. 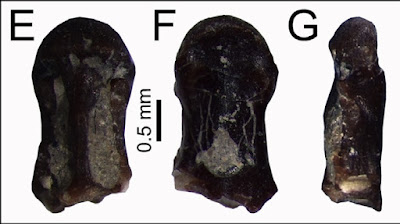 Finally the Serrat del Rostiar-1 site produced a tooth set in a fragment of bone from an unknown Iguanid, and another tooth set in bone plus an ishium of an unknown Lizard. The oldest known Iguanid comes from the Early Jurassic of India, and the group were widespread by the End Cretaceous. 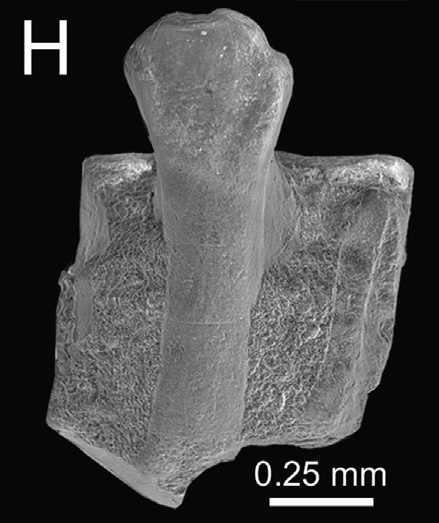 The L'Espinau site produces grey marly mudstones with organic inclusions, mostly in the form of coaly material. It has a distinctive bone-bed, which has produced numerous scattered Hadrosaur bones. The site is not close to any fluvial (river) sandstone deposits, though some lucastrine (lake) limestones are found nearby, and the site probably represents a floodplain.

L'Espinau has produced a partial premaxilla, a fragment of maxilla, five fragments of dentaries and a portion of a humerus assigned to Albanerpetontid Lisamphibians. These appear simlar to (less fragmentary) material previosuly described from the Blasi-2 locality which is nearby, and which have been assigned to the genus Albanerpeton, which is otherwise known from fluvial, lucastrine and floodplain environments in the Cretaceous of North America and Cainozoic of Europe, surviving as late as the Pliocene in Hungary and Italy. 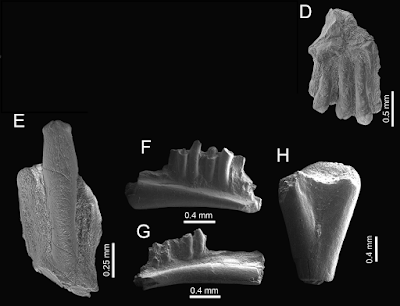 The L'Espinau also produced two sacral vertebrae and two partial ilia assigned to an unknown Alytine Anuran (Midwife Toad), a group closely related to the Painted Frogs, Discoglossinae. This group is also found in southern Europe and North Africa today, but which in the Cretaceous has previously been described from Central Asia and Romania.

This site also yielded two partial humerii of an unknown Palaeobatrachid Frog, a fragment of maxila from either a Pelobatid (Spadefoot Toads, which are found today in North America, Europe, North Africa and western Asia, and which are known as fossils from the Jurassic and Cretaceous of Norh America and the Eocene onwards in Europe) or a Gobiatid (an extict group of Anurans known from the Cretaceous of Central Asia), and a fragmentary vertebra, a urostyle, a coracoid, a partial radioulna, a humeral epiphysis and six fragments of tibiobifulae from unknown Frogs.

L'Espinau also produced a tooth from an indeterminate Iguanid Lizard in a piece of bone. 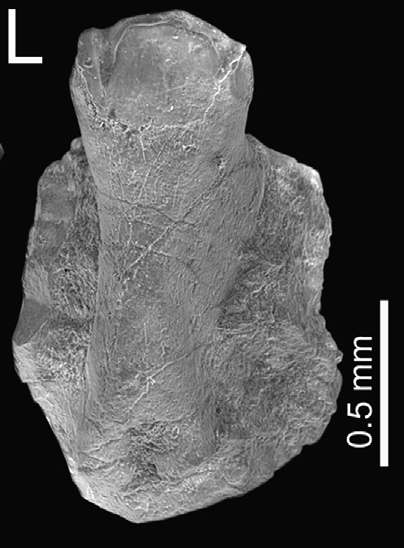 
Blanco et al. describe a partial humerous of a Albanerpetontid Lisamphibian from this site, as well as one prearticular, three partial humeri and six fragments of tibiofibulae from an unknown Painted Frog. 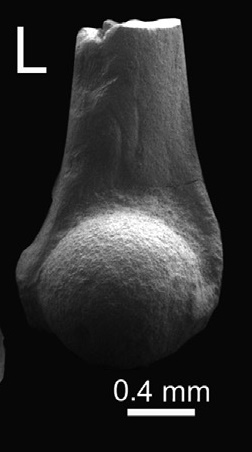 Finally the Camí del Soldat location comprises thinly interbedded grey mudstones and fine sandstones thought to have been laid down on a quite meander-loop of a river. This location produced one urostyle and two partial vertebrae of an unknown Frog.

The Tremp paleoriver valley has yielded a diverse fauna of Lisamphibians and Lizards, much of it similar to other localities from the Late Cretaceous of Spain. However it also contains the oldest, and only Mesozoic, Midwife Toad remains known Europe to date and possibly the oldest, and only Mesozoic, Gecko from Iberia (and possibly Europe). Curiously the sites produced no Snake remains, despite the fact that Snakes are thought to have been well established globally by the Late Cretaceous, though this may be a result of taphonomic or sampling bias, given the low number of specimens in the study.

Ancestor of all modern Snakes more likely to have been a burrower than a swimmer.    Snakes are one of the most successful groups of living vertebrates, with over 3000 living species found in all but the very coldest environments on Earth. Modern snakes exhibit a wide range of habitat preferences, from... 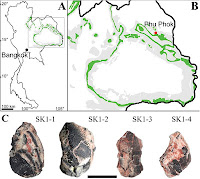 A new species of Salamander from the Early Cretaceous of Western Siberia.               Salamanders, Caudata, are one of the three extant groups of Lisamphibians, along with Frogs, Anura, and Caecilians, Gymnophiona. The earliest fossil Salamanders known date from the Middle Jurassic...
Follow Sciency Thoughts on Facebook.
Posted by Joe Bauwens at 15:36