The Denisonvans were an ancient people who are known from only a single archaeological site, a cave in the Altai Mountains of southern Siberia. The group were identified as being genetically distinct after scientists studied genetic data from the fingerbone of a child found in 2008 and thought to have lived at least 50 000 years ago.  Mitochondrial DNA from this individual suggests that the most recent female direct ancestor that this individual shared with Neanderthals and Modern Humans that lived about a million years ago. This was possible because mitochondrial DNA is found in the mitochondria, organelles outside the cell nucleus, it is passed directly from mother to child without being sexually recombined each generation, enabling precise estimations of when individuals shared common ancestors, at least through the female line (it is also possible to trace direct ancestry through the male line, using DNA from the Y chromosome, which is passed directly from father to son without sexual recombination). However analysis of the main nuclear DNA of the individual (DNA which is found in the nucleus of the cell and which is recombined with each generation), suggests that he or she shared a more recent common ancestor with Neanderthals (though clearly from a genetically distinct and separate population), and came from a population that had supplied about 5% of the DNA found in modern Melanesian populations and about 0.2% of the DNA found in modern East Asian and Native American populations.

In 2010 a foot bone was recovered from the same site, thought to be from an individual that lived in the area at approximately the same time (i.e. to within a few thousand years). However genetic material recovered from this specimen revealed it to be of Neanderthal rather than Denisovan origin.

In a paper published in the Proceedings of the National Academy of Sciences of the United States of America on 16 November 2015, a team of scientists led by Susanna Sawyer and Gabriel Renaud of the Department of Evolutionary Genetics at the Max Planck Institute for Evolutionary Anthropology describe the results of a study of two molars found in the Denisova Cave in 2000 and 2010.

The molars are distinctly larger and flatter than anything seen in Modern Humans or Neanderthals, more similar to those seen in Pliocene Hominids. Only two comparable teeth have been found at Late Pleistocene sites elsewhere, one from Romania and one from Uzbekistan. Both are heavily worn, and were most likely third molars. 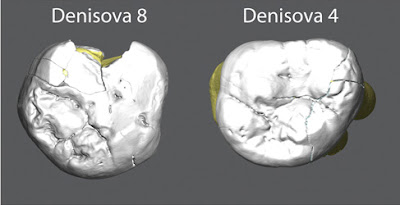 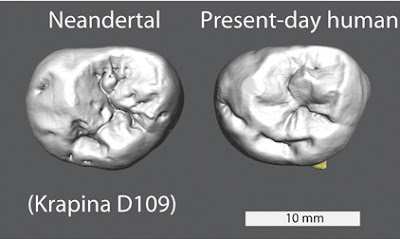 Occlusal surfaces of the Denisova 4 and Denisova 8 molars and third molars of a Neandertal and a present-day European. Sawyer & Renaud (2015).

Radiocarbon dating of the layers from which the teeth were recovered suggests that they were deposited more than 50 000 years ago and about 48 600 years ago. A molecular clock approach (which measures the rate of mutation on non-sequencing DNA), suggests that the oldest individual may have lived as long as 60 000 years before the youngest. This suggests that Denisovans were in the area and using the cave for a considerable period of time, possibly intermittently with the cave being inhabited by Neanderthals at other times.

Genetic comparison placed the teeth in a group along with the fingerbone, suggesting that the Denisovans do form a separate population, distinct from either Neanderthals or Modern Humans. However the study showed more genetic diversity among the three Denisovan individuals (who were all buried in the same cave) than among all known Neanderthals sequenced (who come from a large area of Europe and West Asia), though this diversity was still considerably lower than found in modern Europeans. 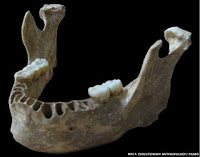 Rainforest resources in the diet of Late Pleistocene Humans from Sri Lanka.              Early modern Humans expanded from Africa around the globe in the Late Pleistocene, from about 125 000 years ago onwards. In doing so they adapted to a wide variety of environments, though some habitats... 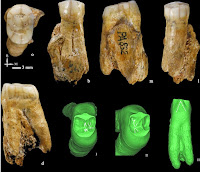