Mososaurs were a distinctive group of large marine Squamates (i.e. members of the same group of animals as Lizards and Snakes) that came to dominate many marine ecosystems during the last 20 million years of the Cretaceous. The Halisaurines are considered to be less advanced than other Mososaurs, and least well adapted to a life in open marine waters. They were small for Mososaurs, but still typically reached 4-6 m in length, and have been recorded from North and South America as well as Europe and Africa.
In a paper published in the Journal of Systematic Palaeontology on 7 December 2015, Takuya Konishi of the Royal Tyrrell Museum of Palaeontology and Department of Biological Sciences at the University of Cincinnati, Michael Caldwell of the Department of Biological Sciences and Earth and Atmospheric Sciences at the University of Alberta, Tomohiro Nishimura and Kazuhiko Sakurai of the Hobetsu Museum and Kyo Tanoue of Fukuoka University describe a new species of Halisaurine Mosasaur from the Late Cretaceous Hakobuchi Formation of southern Hokkaido Island, Japan.

The new species is placed in the genus Phosphorosaurus, which has previously been described from Belgium, and given the specific name ponpetelegans, meaning 'elegant creek': the specimen from which the species is described comes from a siderite nodule found at Pankerusano-sawa Creek, the specimen is exceptionally well preserved and the creek is noted for its clear water, in addition the specimen was found close to the village of Hobetsu, the name of which also means 'creek'. The specimen comprises a partial skull, reconstructed as being about 500 mm in length, disarticulated but not compressed and largely complete but with some missing elements, plus a fragmentary lower jaw and several neck vertebrae.

The eye sockets of Phosphorosaurus ponpetelegans are exceptionally large, and interpreted by Konoshi et al. as having given the living animal good binocular vision, with the eyes having a visual field overlap of 35°, larger than in any known Lizard or in any Mososaur for which it has been possible to make such a reconstruction, and towards the upper end of that found in Snakes. Among Snakes a higher visual field overlap tends to be associated with nocturnal species, and a large eye size is also a trait typical of animals of any type which hunt at night (or otherwise in poor light),

The Hakobuchi Formation has previously produced larger, non-Halisaurine Mosasaurs, which are interpreted as having been piscavores (Fish-eaters) capable of chasing down large prey. It has also produced Lanternfish and Coleoid Cephalopods, groups that today are typically bioluminescent, living in the depths of the ocean below the photic zone (the depths to which sunlight penetrates) during the day, but migrating upwards at night to feed. This leads Kinishi et al. to speculate that Phosphorosaurus ponpetelegans may have been a nocturnal predator, targeting these species and occupying a separate ecological niche to the larger Mososaurs present. 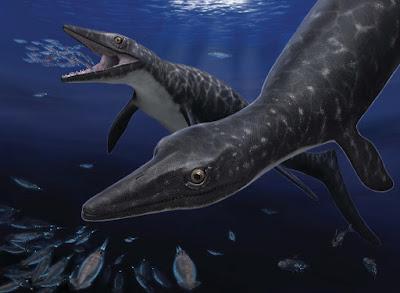