Storms and floods kill at least 43 people in the US over Christmas period.

AT least 43 people have died across the southern and midwest United States over the past week as the country has been hit by a series of severe floods and storm events. Multiple deaths have been recorded in Texas, Missouri, Mississippi, Tennessee and Illinois, and severe storm and flood damage in New Mexico, Louisiana, Arkansas, Oklahoma and Alabama. 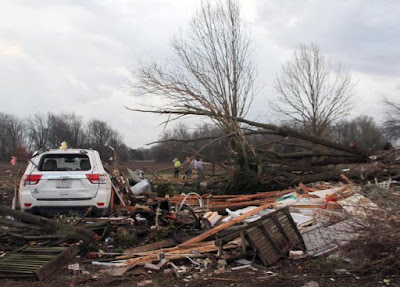 The remains of a home destroyed by storms in Roundaway, Mississippi, on 23 December 2015. Troy Catchings/The Press Register/AP.

The highest death toll has been recorded in Texas where a series of nine tornadoes touched down to the northeast of Dallas on Saturday 26 December, damaging or destroying around 140 homes, as well as toppling trees and power lines and killing at least eleven people. The worst affected area was the community of Garland in Dallas County, where around 600 homes have been destroyed, at least eight people have died, three of them in vehicles thrown from in interstate highway, and at least fiftenn more have been injured. Twenty three people have been reported in the town of Rowlett, also in Dallas County. Three further deaths have been reported in Collin County. In addition heavy snowfall has been reported across much of the north of the state, with snow in excess of 50 cm deep closing many roads and cutting off smaller communities. 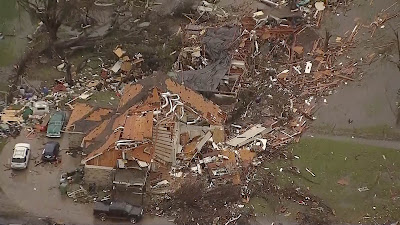 Homes destroyed by a tornado in Garland, Texas on 26 December 2015. NBC.

In Missouri six people have died in two separate incidents involving vehicles on flooded roads in the southern art of the state, four soldiers from another country stationed at Fort Leonard Wood for training who died in Pulaski County and two other people in Green County. Two other deaths have been reported from the state, and several more people are missing, though details of these are not yet clear, and many people have been evacuated from homes in low-lying areas. 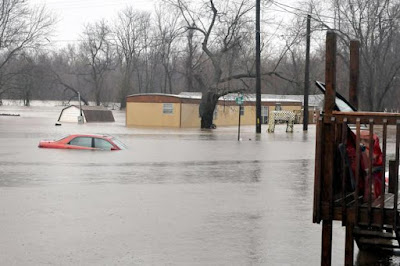 In Mississippi ten people including a seven-year-old boy died in a series of tornadoes that swept across the northern part of the state on Wednesday 23 December. In the worst event a single tornado stayed on the ground for over 200 km, leaving a trail of destruction across six counties, and killing four people in the small community of Holly Springs in Marshall County. 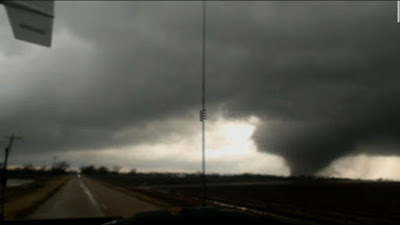 A tornado that touched down near Clarksdale, Mississippi, on 23 December 2015. Mike Prendergast/TV Weatheroom.

In Tenassee at least six people died in storms on Wednesday 23 December including three teenagers found dead in a car submerged in a creek Maurey County. Further deaths have been reported in Perry County, where an elderly couple were blown off a road in their car and in Rhea County where a 22-year-old man died when his car was caught in a flash flood. This has been followed by a drop in temperature that has brought ice storms, sleet, snow and freezing rain to areas where many people have lost their homes and many more have damaged homes and/or have lost electricity supplies. 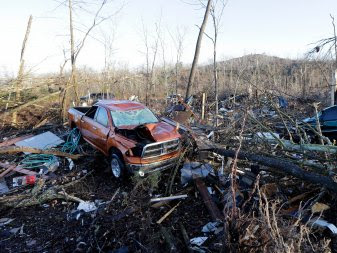 
Illinois was hit by a series of blizzards and flash floods on Saturday 26 December, and five people including two children are reported to have died when their car was caught in a flash flood in Marrion County. Flood warnings remain in place across much of the south of the state, particularly close to the Mississippi River, with evacuations being carried out in some low-lying areas. 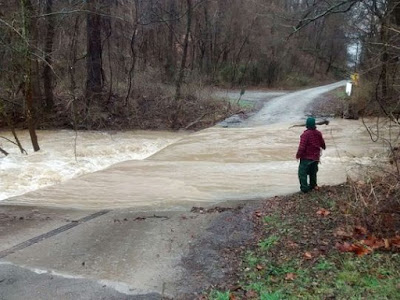 Eastern New Mexico has been hot by severe winter storms with more than 50 cm of snow falling in places and drifts in excess of 3 m. At least one person has died of hypothermia in Albuquerque and around 10 000 homes have been left without electricity due to downed power lines. A large number of vehicle accidents have been reported as drivers struggle to cope with unfamiliar conditions. 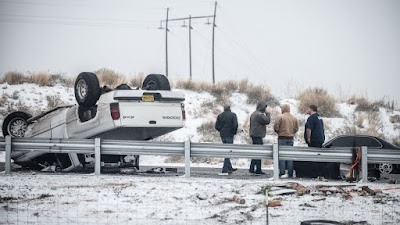 A road traffic accident to the south of Albuquerque in New Mexico on Saturday 26 December 2015. Roberto Rosales/The Albuquerque Journal/AP.

In Louisiana high winds and tornadoes have damaged and destroyed homes across large areas of the state, as well as toppling many trees, which have blocked roads and brought down power lines; about 19 000 homes were without power on the morning of Monday 28 December. The state is on high alert from expected flooding, with a number of levees already reported to be under strain. 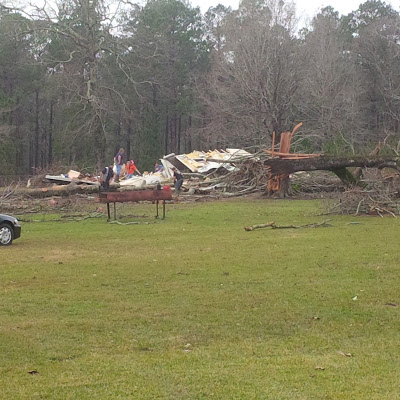 Damage caused by a tornado in Rapides Parish, Louisiana on Monday 28 December 2015. KALB.

In Arkansas a woman was killed when a tree was blown onto her house on Wednesday 23 December and a man has died in a flooding in Pope County on Monday 28 December, after his car was washed off a road in a flash flood, and several other people have been reported missing. Flooding has been reported across much of the northeast of the state, while tornadoes have been reported in Ouachita, Calhoun and Lee counties. 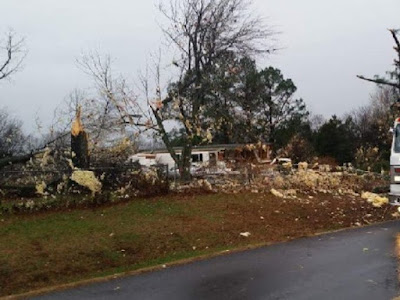 In Oklahoma two people are known to have died in flooding on Monday 28 December, and at least one more is missing; a third death in the state is being attributed to hypothermia. About 50 people have been admitted to hospitals with storm-related injuries. High winds, heavy rainfall and snow have brought disruption to much of the state, with About 200 000 people being left without electricity, and several cases of carbon monoxide poisoning have been reported as people without electricity have tried to warm their homes with little-used fireplaces, only to find that ventilation has been blocked. 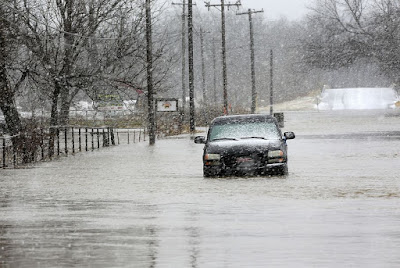 In Alabama heavy rain began to fall on Christmas Day bringing flooding to the Birmingham area, and has continued for much of the following week, leading to flooding across much of the state. Three people are known to have died, two in Coffee County and one in New Hope. Flooding has forced many people from their homes, and a series of tornadoes has caused further problems in the Birmingham area. 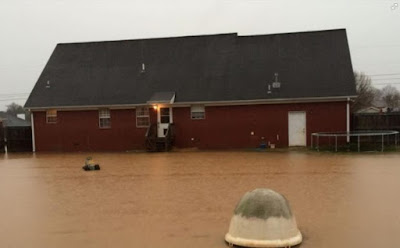 The storms and flooding has been widely linked to the El Niño weather system currently affecting the Pacific Ocean, a phenomenon that typically brings high levels of rainfall to the southwest United States, starting around the beginning of December, although this year the area has been suffering floods since the middle of October. 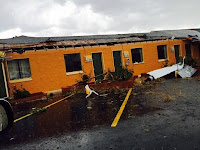 Severe damage to homes and businesses after tornado hits Hawthorne, Nevada.          Six homes and five businesses have reportedly suffered severe damage after a tornado touched down in the town of Hawthorne in Mineral County, Nevada, at about 3.15 pm local time on Friday 5 June 2015.  The storm created a trail of damage through the town about...
Follow Sciency Thoughts on Facebook.