A woman was lucky to escape without injury after a landslide destroyed her house at Ovens in northeast Victoria, Australia, on the evening of Tuesday 8 December 2015. Several neighbouring properties have reportedly also been damaged by the incident. The landslide occurred after 50 mm of rain fell in the area in an hour. Landslides are a common problem after severe weather events, as excess pore water pressure can overcome cohesion in soil and sediments, allowing them to flow like liquids. Approximately 90% of all landslides are caused by heavy rainfall. In this instance investigators have suggested that the incident may be related to the recent removal of several trees close to the property. Trees and other vegetation can help to stabilize hill slopes with their root system, and landslide events are often linked to the removal of trees. 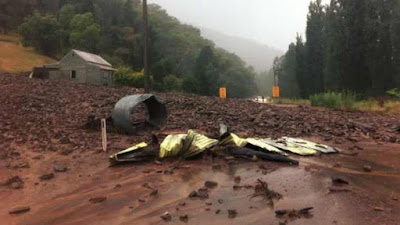 The landslide was one of a series of incidents triggered by a storm system that moved across Victoria, passing to the east of Melbourne. This storm system led to flash flooding in several areas, with 94.6 mm of rain recorded in two hours at Carboor Upper and 86.2 mm at Eurobin. There have also been reports of hail stones the size of golf balls, fires started by lightning and a large number of trees downed by high winds.

The approximate location of the 8 December 2015 Ovens landslide. Google Maps.

Storm systems form due to heating of air over the sea. As the air is heated the the air pressure drops and the air rises, causing new air to rush in from outside the forming storm zone. If this zone is sufficiently large, then it will be influenced by the Coriolis Effect, which loosely speaking means the winds closer to the equator will be faster than those further away, causing the storm to rotate, clockwise in the northern hemisphere and anticlockwise in the southern hemisphere. Such storms can carry large amounts of water, evaporated from the surface of the sea by the warmth of the Sun, which can then be released abruptly as rain or hail when the moist air encounters cooler conditions over land (the amount of water the air can hold relates directly to its temperature). 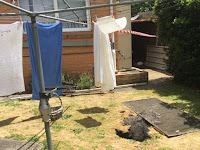 Melbourne woman swallowd by 3 m sinkhole.
A woman had to be rescued by firefighters after being swallowed by a sinkhole while hanging out washing in her garden on Tuesday 25 November 2014. Christina Beaumont fell into the hole at about 11.30 am local time in the Springvale South area of the city, and had to...