Evidence of an Ice Age at the start of the Middle Jurassic.

The Jurassic lasted approximately 65.3 million years, from about 201.3 million years ago till about 145 million years ago, and is generally considered to have been a period of exceptional greenhouse warming. It is divided into the Early, Middle and Late Jurassic, each with its own distinctive climates and faunas (as well as shorter subdivisions). The Early Jurassic ended 174.1 million years ago with the Toarcian Extinction Event, a period of exceptional warming triggered by volcanic activity in South Africa that sharply increased the amount of carbon dioxide in the atmosphere, which in turn triggered an anoxic ocean event (warmer water is less able to hold dissolved oxygen), causing many groups of marine organisms to die out. Recent evidence has suggested that this may have been followed by a period of severe cooling at the beginning of the Middle Jurassic; this has included signs of ice rafted debris in Jurassic Arctic basins and the formation of the mineral glendonite, a form of calcite which only forms in cold water, though it has not been suggested that there was significant glaciation on land (neither pole was covered by a continental land-mass in the Jurassic).

Oxygen has three stable isotopes, Oxygen-16, Oxygen-17 and Oxygen-18, with the heaviest, Oxygen-18 being the most abundant. As Oxygen-18 is slightly heavier at than the other isotopes water molecules containing this isotope require slightly more energy  to evaporate at the water surface, so under cooler conditions the proportion of Oxygen-18 in the water rises and under warmer conditions it falls. Many marine organisms with calcite shells store oxygen in their shells in a proportion that matches the surrounding water, enabling palaeontologists and geochemists to use this proportionality as a reliable proxy for the temperature in ancient marine deposits.

During the Jurassic the continents were joined together into a single supercontinent, Pangea. This was roughly 'C' shaped, with the interior part of the 'C' forming an equatorial ocean, the Tethys. However the Jurassic had a very warm climate, with subsequent high sea levels, and many areas of the continents were flooded. In particular an epicontinental sea (sea which lies on submerged continental crust), the Laurasian Seaway covered much of what is now Europe, connecting the tropical Tethys Ocean to the Boreal Sea around the North Pole, and allowing water to circulate between the two (in the modern world the Bering Straight is another such epicontinrntal seaway, connecting the Pacific to the Arctic across an area that is part of the North American Continental Plate, an area which was exposed during the Pleistocene glaciations).

By examining shells from the early Middle Jurassic of the Laurasian Seaway that showed little sign of alteration (recrystalization of replacement of the original calcite crystals), Korte et al. were able to detect a rise in Oxygen-18 of 2.5 parts in a thousand, equivalent to a drop in temperature of 10 degrees centigrade, over a period of about half a million years.

During this period the area that is now the North Sea, and which was then part of the Laurasian Seaway, is known to have undergone considerable uplift, driven by a rising volcanic plume from deep within the Earth, similar to the Yellowstone Plume beneath modern Wyoming (such a plume would not need to erupt as the surface to cause significant uplift, emplacing new material on the underside of the overlying tectonic plate would have the same effect), while at the same time Ammonite distributions across the Laurasian Seaway became fragmented by latitude (i.e. instead of having the same group of species across the seaway as in the Early Jurassic, different populations began to appear in the north and south). Korte et al  suggest that the rising North Sea Dome may have blocked the Laurasian Seaway, preventing currents running between the Tethys Ocean and Boreal Sea, thereby causing cooling in the Boreal Sea and possibly the formation of pack ice. 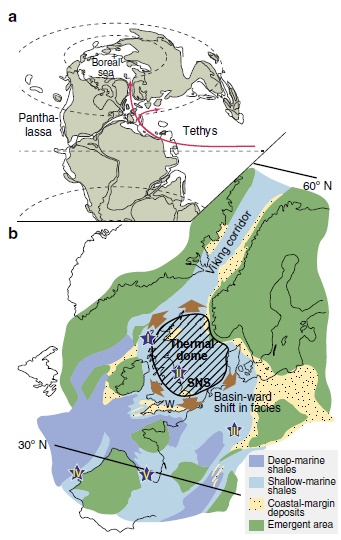 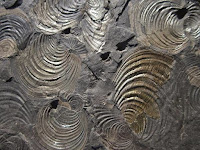 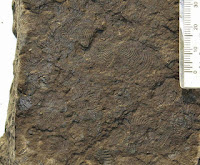 Opportunistic Bivalves during the Early Jurassic Toarcian Oceanic Anoxic Event. The Toarcian Oceanic Anoxic Event is an extinction event that took place in the Early Jurassic, about 183 million years ago. It took place in four phases, thought to have been related to Milankovitch Cycles. During each phase the temperature of the global ocean is thought...
Follow Sciency Thoughts on Facebook.