Alpine Mayflies, Baetis alpinus, are widespread around the headwaters of many European rivers, being found in swift-flowing stoney streams at altitudes of between 200 and 2600 m (possibly higher). Like other Mayflies they spend the majority of their lives as aquatic larvae, only emerging for two final, winged stages, the pre-reproductive subimago, which typically lasts for less than 24 hours, and the sexually reproductive imago stage. Male imagos form swarms over fast-flowing water, with females flying into these swarms to mate. Males die after mating, females live long enough to find a suitable egg laying site (typically an overhanging rock upstream of the mating site). This reproductive system leaves little oportunity for long distance dispersal, and a numer of other Mayfly species have been shown to be complexes of cryptic species, made up of morphologically distinct but reproductively isolated lineages thought to have become separatedduring the Pleistocene glaciations. Alpine Mayflies are considered to be highly variable, both in morphology, an in reproductive behavior, with populations varying in generation time from three generations per year to one generation every two years (though this variation is thought to be linked to altitude and temperature), making the species a prime candidate for the presence of cryptic lineages. 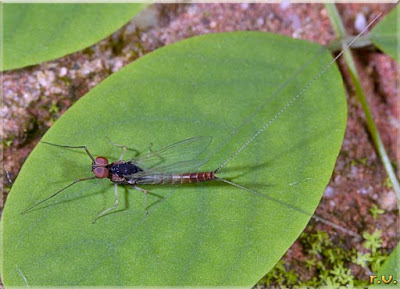 Leys et al. sampled 1591 Mayfly larvae from 24 sites in the upper parts of four major European river basins, the Rhine, Rhone, Danube and Po. Of these 112 specimens were found to bellong to Baetis melanonyx, a closely related species that resembles Baetis alpinus closely. The remaining 1479 specimens were found to belong to two separate lineages, identified as A and B. Of these 1001 were assigned to lineage A and 478 assigned to lineage B.

The specimens assigned to lineage B were found in all river basins except the Po, and were found most commonly in streams fed by groundwater, while those of lineage A were found most commonly in streams fed by glacial meltwater. Members of lineage A were also found to have on average a higher number of setae (hairs) at the apex of their maxilary palps (part of the mouth structure) and also more setae in the dorsal margins of their femora (third segments of the legs).

The two lineages appear to be reproductively isolated, but are more closely related to one-another than to any other species. However the Leys et al. do not formerly describe the lineages as separate species at this time, pending further study of the phylogeny of the species across its total range.