Seventeen students have been confirmed dead and another three students and two guides are still missing after a flash flood triggered a landslide that hit a campsite near the popular Dua Warna Waterfall tourist attraction at Sibolangit in North Sumatra on Monday 16 May 2016. The students are believed to have come from a number of different universities in the region. A further fifty seven people were rescued alive after the incident, only one of whom required medical attention. Over three hundred people are involved in an ongoing rescue operation at the site, including personnel from the National Search and Rescue Agency of Indonesia and volunteers from university groups, though after 24 hours have passed there is though to be little hope of recovering anyone else alive. 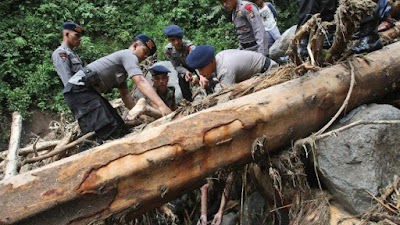 Rescue workers recovering a body at the Dua Warna Waterfall site following a landslide on 16 May 2016. Binsar Bakkara/AP.

The incident is reported to have occurred following several days of heavy rainfall associated with the onset of the summer monsoon. Landslides are a common problem after severe weather events, as excess pore water pressure can overcome cohesion in soil and sediments, allowing them to flow like liquids. Approximately 90% of all landslides are caused by heavy rainfall. Flash floods are another problem associated with high rainfall, occurring when rainfall levels exceed the ground's ability to absorb water. These can be a particular problem after dry spells, where the ground has become hard-baked and nonabsorbent, and in areas where too much of the ground has been covered by paving which does not allow water to soak away.

The climate of North Sumatra is wet year round, but has a distinct summer monsoon season, typically starting in May, the area's wettest month, when over 250 mm of rain typically falls. However this weeks rains have been described as exceptional, with over a month's rain falling in 24 hours before the incident.

Monsoons are tropical sea breezes triggered by heating of the land during the warmer part of the year (summer). Both the land and sea are warmed by the Sun, but the land has a lower ability to absorb heat, radiating it back so that the air above landmasses becomes significantly warmer than that over the sea, causing the air above the land to rise and drawing in water from over the sea; since this has also been warmed it carries a high evaporated water content, and brings with it heavy rainfall. In the tropical dry season the situation is reversed, as the air over the land cools more rapidly with the seasons, leading to warmer air over the sea, and thus breezes moving from the shore to the sea (where air is rising more rapidly) and a drying of the climate. This situation is particularly intense in Sumatra, due to the presence of the Barisan Mountains along the western fringe of the island. High mountain ranges tend to force winds hitting them upwards, which amplifies the South Asian Summer Monsoon, with higher winds leading to more upward air movement, thus drawing in further air from the sea.

Eruption on Mount Sinabung.                 Residents of villages close to Mount Sinabung on North Sumatra have been forced to evacuate their homes following two eruptions on the volcano on Thursday 25 February 2016. The first eruption...