Gavialoid Crocodylians, or Gharails (Gavialoidea), are highly specialized Crocodylians with elongate, slender jaws and eyes and nostrils high on their heads. They are specialists piscavores, adapted to catching Fish rather than more generalist ambush predators like other Crocodylians. Today only a single species is extant, the Indian Gharail, Gavialis gangeticus, but the group has an extensive fossil record, and a contested evolutionary history. Generic studies have suggested that the closest relative of the living Gharail is the Indonesian False Gharial, Tomistoma schlegelii, and that the two probably diverged some time in the Eocene; this fits well with the presence of a number of fossil species assigned to the genus Gavialis in Indonesia, and suggests that the group may have originated in southern Asia at this time. However analysis of the fossil record suggests that Gavialoids diverged from other Crocodylians in the Cretaceous, with primative members of the group appearing in the Late Cretaceous in North America, Europe, and Africa. One possible key to understanding this group are the South American Gavialoids, a group which persisted at least till the Miocene, and which appear to have included advanced forms similar to modern and recent Asian species, as well as more primative members of the group.

The Pebas formation was laid down in an extensive wetland system formed by the drainage of an ancient riverway from what is now the Amazon Basin running west into the Pacific Ocean. This ancient west-flowing Pebas river system has been replaced by the modern east-flowing Amazon river system due to the formation of the Andes mountains, driven by subduction of the Nazca Plate beneath the South American Plate along the west coast of South America.

The new species is placed in the previously described South American genus Gryposuchus, and given the specific name pachakamue, Pachakamue being a Quechua god who was the first storyteller and who preserved ancient knowledge about the origin of living things in Amazonia. The species is described from an almost complete skull, slightly distorted around the right orbit abd lacking most of the temporal and occipital bones, as well as the pterygoid flanges, plus nine less complete skulls, which together give a good impresion of the head of the animal, thought the post-cranial skeleton is unknown. 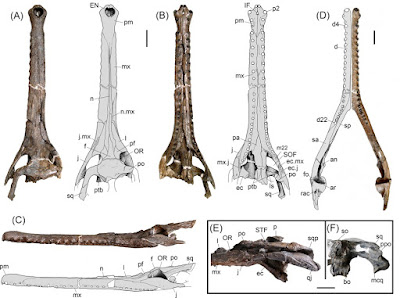 A phylogenetic analysis carried out by Salas-Gismondi et al. suggests that these two advanced Gavialoid genera (Gryposuchus and Gavialis) are in fact closely related. This supports the idea of a modern Asian, origin of modern Gavialoids, some of which then migrated to South America, probably along the ancient Tethys Seaway and across a narower Atlantic to the Caribbean and then the Pebas River Basin. Earlier 'primitive' South American Gavialoids are suggested to be the results of an earlier radiation within the group, more closely related to other 'primative' forms elsewhere than to Gryposuchus. 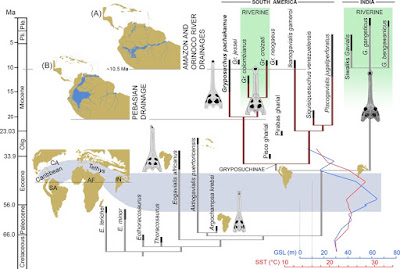 Time calibrated phylogenetic tree of the Gavialoidea and relevant paleogeographic distributions associated with the evolution and diversification of gavialoids in marine and freshwater settings. During the Late Paleocene-Early Eocene interval, peaks of sea surface temperature (SST) and global sea surface level (GSL) occurred together with tropical marine connections through the Tethys Ocean and Caribbean Sea. During the Neogene, distinct biomes dominated tropical South America: (A) Acre Phase, after the onset of the eastern-draining Amazon and northward-draining Orinoco river systems; and (B) Pebas Mega-Wetland System, with its drainage northward to the Caribbean Sea. Abbreviations: Olig., Oligocene; Ple., Pleistocene; Pli., Pliocene. Salas-Gismondi et al. (2016). 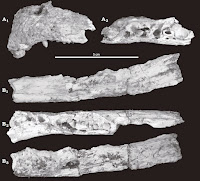 An Allodaposuchian Crocodylian from the Late Cretaceous of the southeast Pyrenees.  All modern Crocodylomorphs are assigned to a... 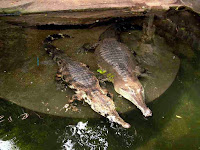