Makemake is the largest known body in the Kuiper Belt and the second-brightest Trans-Neptunian Object (after Pluto). It has a very bright albedo (it reflects a lot of light), with a surface apparently covered by methane ice, and is known to rotate on its access every 7.771 hours. However much less is known about the mass and density of Makemake than the other two largest Kuiper Belt Objects, Pluto and Eris, as in the case of these objects satellites have been discovered, the orbital properties of which have helped astronomers to understand the parent bodies.

In a paper published on the online arXiv database at Cornell University Library on 25 April 2016, Alex Parker and Marc Buie of the Southwest Research Institute, Will Grundy of the Lowel Observatory and Keith Noll of NASA's Goddard Space Flight Center announce the discovery of a moon orbiting Makemake by the Hubble Space Telescope.

The moon was detected in two sets of images, take on 1 & 29 April 2015 with the Hubble Space Telescope's Wide-Field Camera 3, with the change in relative position between Earth and Makemake between these dates sufficient to make it extremely unlikely that the object is unrelated to the Dwarf Planet. Since Makemake has previously been imaged by Hubble instruments capable of spotting such an object, it is thought that the moon must be in an orbit edge on to the telescope, so that it is hidden by the brightness of the planet much of the time. 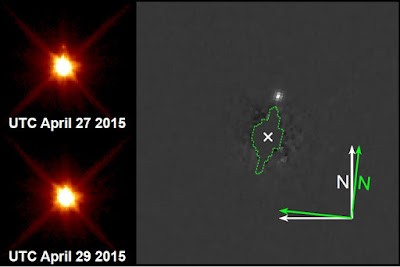 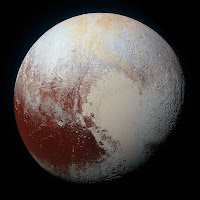 Sputnik Planum: An apparently young feature on the surface of Pluto.                                 Pluto was the first known and is one of the largest bodies in the Kuiper Belt, a field of Dwarf Planets and smaller bodies beyond Neptune which are thought to have been beyond the zone of true-planet formation, and therefore to reflect the nature of the early Solar System. In July 2015 the New Horizons spacecraft flew past Pluto, making a detailed survey of the surface...

Deciphering the rings of 10199 Chariklo. 10199 Chariklo is a Centuar (asteroid or comet-like body found between the orbits of Jupiter and Neptune), which was first discovered in 1997 and subsequently found to be the largest such body, with an...