Milnesium swansoni: A new species of Tardigrade from the Kansas tree canopy.

Tardigrades, or Water Bears, are minute (generally less than 1 mm and always less than 3 mm) aquatic animals related to Arthropods and Nematodes. They are noted for their remarkable toughness, able to enter a dormant state in which they can survive freezing, high temperatures, dehydration and even exposure to vacuum, becoming active again when normal conditions return. This means that Tardigrades are able to colonize a remarkable variety of environments, from the deepest of marine trenches to arid mountain ranges at the heart of continents. Members of the genus Milnesium are predatory Tardigrades favouring limno-terrestrial environments (environments that are seasonally wet, but which are also desicated for part of the year) and consuming animals such as Rotifers, Nematodes and other, smaller, Tardigrades. The genus was first described in 1840, and was for a long while thought to be monospecific, comprising a single species, Milnesium tardigradum, with a near-global distribution, but improvements in both microscopic imaging techiniques and genetic sampling methods have led to a revision of this view, with a number of new species being described in the species since 1990, and many Tardigrade experts now considering all records of Milnesium tardigradum outside Europe as probably eroneous.

The new species is named Milnesium swansoni in honour of Kent Swanson whose family established the Swanson Family Scholarship, of which Alexander Young was a beneficiary. The species is described from five male and five female specimens, out of a total of 115 individuals collected from Lichen and Moss growning in the canopy of a variety of trees. The specimens range from 329 to 404 μm in length, and show slight sexual dimorphism, the males having thickened secondary claws lacking sub-branches on their forelimbs, while the females have thinner, branching secondary claws on this limb. 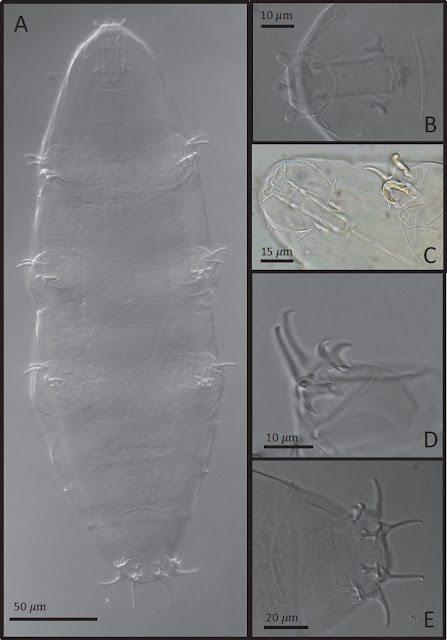 A new species of Tardigrade from Latvia. Tardigrades are small animals (adult sizes of 0.1-1.5 mm) distantly related to Arthropods and Onychophorans (Velvet Worms). They are plump...