Thermoplasmates are highly acid-tolerant Archaeons (Prokaryotic micro-organisms resembling Bacteria, but only distantly related to them, and more closely related to Eukaryotes) which usually lack rigid cell walls and are often amorphous in shape, and typically thrive at high temperatures. They are anaerobic (i.e. they do not need oxygen), typically gaining energy by the oxidation of iron (carrying out chemical processes in which iron acts as an electron donor).

In a paper published in the International Journal of Systematic and Evolutionary Microbiology on 1 January 2016, Olga Golyshina of the School of Biological Sciences at Bangor University, Heinrich Lünsdorf of the Helmholtz Centre for Infection Research, Ilya Kublanov of the Winogradsky Institute of Microbiology of the Russian Academy of Sciences, Nadine Goldenstein and Kai-Uwe Hinrichs of the Center for Marine Environmental Sciences at the University of Bremen and Peter Golyshin, also of the School of Biological Sciences at Bangor University, describe a new species of Thermoplasmate from acid runoff at two copper mines, one at Cantareras in Spain, the other at Mynydd Parys on Anglesey. 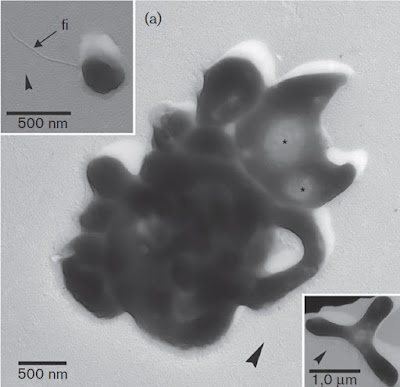 Two new hydrothermal vent communities from the southern Central Indian Ridge.       Deep sea hydrothermal vents are unique ecosystems where the food chain is based not upon the photosynthetic activity of plants or algae, but rather of chemotrophic bacteria that gain their energy from...
Follow Sciency Thoughts on Facebook.
Posted by Joe Bauwens at 12:11