Sometime between 69 000 and 77 000 years ago a large volcano occupying the site of the current Lake Toba on northern Sumatra underwent what is believed to have been the largest volcanoc eruption of the Quaternary Period, covering much of south Asia in around 15 cm of ash, and probably causing atmospheric effects that resulted in a six year winter and a global downturn in temperatures that lasted about a thousand years. This is widely thought to have had a profound affect on Early Human populations, which were already expanding from Africa into Asia at the time of the eruption, with some palaeoanthropologists linking the event to a (known) bottleneck in Human genetic evolution, when the global human population is believed to have dropped to a few thousand reproducing individuals, and suggesting that the Human population of the time was wiped out apart from a few groups in East Africa. However determining a precise date for the event has proved problematic, with estimates of the timing of the event having margins of error in the thousands of years, which makes it difficult to relate the time of the eruption to archaeological sites, and hard to differentiate the climatic effects from those relating to longer climate cycles.

In a paper published in the Proceedings of the National Academy of Sciences of the USA on 29 October 2012, Michael Storey of the Quaternary Dating Laboratory at the Department of Environmental, Social and Spatial Change at Roskilde University, Richard Roberts of the Centre for Archaeological Science at the School of Earth and Environmental Sciences at the University of Wollongong and Mokhtar Saidin of the Centre for Global Archaeological Research at the Universiti Sains Malaysia, describe the results of a study of ash deposits linked to the Toba eruption at Lenggong Valley in Peninsular Malaysia, roughly 400 km to the northeast of the eruption site. 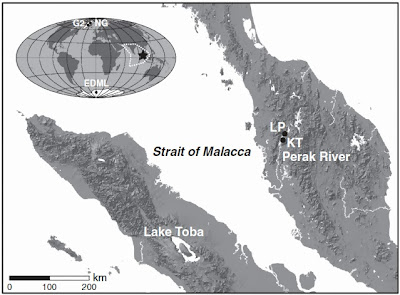 Location of the Toba caldera, north Sumatra, and Lenggong, Perak (LP), Malaysia, site of the borehole. Six kilometers to the south of the Lenggong borehole is the archaeological site at Kota Tampan (KT) located on an ancient terrace of the Perak River, where ash occurs between and above stone tools. (Inset) Star on the world map marks the location of the Toba caldera, and the dashed line encompasses presently known occurrences of ash. Story et al. (2012).


Storey et al. used Argon-Argon isotope dating to determine the age of the ash deposits. This relies on determining the ratio of radioactive Argon⁴⁰ to non-radioactive Argon³⁹ within minerals from igneous or metamorphic rock (in this case volcanic ash) to determine how long ago the mineral cooled sufficiently to crystalize. The ratio of Argon⁴⁰ to Argon³⁹ is constant in the atmosphere, and this ratio will be preserved in a mineral at the time of crystallization. No further Argon³⁹ will enter the mineral from this point, but Argon⁴⁰ is produced by the decay of radioactive Potassium⁴⁰, and increases in the mineral at a steady rate, providing a clock which can be used to date the mineral.

Using this method they were able to determine an age of 73 880 years, give-or-take 320 years, for the ash sample, a date an order of magnitude more accurate than any such date achieved for the Toba Eruption to date.

Storey et al. also not that at the nearby Kota Tampan site the ash deposits lie directly on top of archaeological artifacts consistent with the work of Early Modern Humans on an ancient terrace of the Perak River. This suggests that Early Modern Humans had reached this area by ~74 000 years ago, which is consistent with other remains thought to have been produced by Early Modern Humans and found at Jwalapuram in southern India, which date from around 78 000 years ago. However it cannot be determined if the toolmakers were able to survive the Toba Eruption, or whether they are ancestral to modern Human populations in east Asia or Australasia. Furthermore it is possible that the toolmakers were Denisovans, members of an archaic Human group known from Siberia, who are believed to have shared a non-African ancestor with the Neanderthals (i.e. to have been living outside Africa long before 74 000 years ago). To complicate matters further some palaeoanthropologists believe that the Denisovans may be among the ancestors of the Melanesians and Aboriginal Australians.

See also The spread of deserts in northern China, Toolmaking in the northeastern Thar Desert 95 600 years ago, Eruptions on Barren Island, Eruption on Mount Marapi, Sumatra and Eruptions on Krakatau.