The Thar Desert covers over  200,000 km² of land in the northwest part of the Indian Subcontinent, straddling the border between Pakistan and India. It marks the boundary between the deserts of North Africa and the Middle East to the west and the Oriental Biogeographical Zone to the east, and thus marks an important milestone in the movement of early humans (and other hominids) from Africa into south and east Asia.

In a paper published in the journal Quaternary Science Reviews on 1 October 2013, James Blinkhorn of the Centre de la Préhistoire à l'Actuel: Culture, Environnement et Anthropologie at Université Bordeaux, Hema Achyuthan of the Department of Geology at Anna University and Michael Petraglia and Peter Ditchfield of the Research Laboratory for Archaeology and the History of Art at the School of Archaeology at Oxford University describe a collection of Middle Palaeolithic artifacts from at
Katoati in the northeastern Thar Desert, dated to between 12 000 and 95 600 years ago. 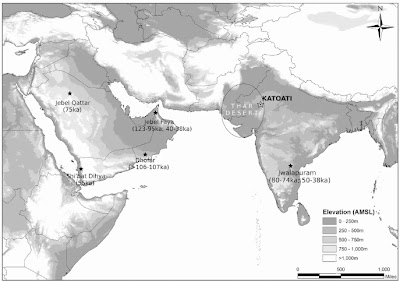 The location of the Katoati site, as well as other similar sites in India and the Middle East. Blinkhorn et al. (2013).

Blinkhorn et al. describe the discovery of a number of stone artifacts resembling Middle Paleaolithic artifacts from Nubia, the eastern Sahara, souther Arabia and south India. The oldest of these artifacts considerably predate the oldest known previous material from the Thar Desert, which is around 60 000 years old, and the oldest previously known material from India, artifacts from Jwalapuram in southern India which date from around 78 000 years ago, strongly supporting the idea that early humans reached India via the Thar Desert rather than by another route. Furthermore maintain the same culture across the time of the Toba Eruption of about 75 000 years ago, which is theorized to have drastically reduced human numbers in the Late Pleistocene to only a few thousand individuals, suggesting that early humans in this area were able to survive this event. 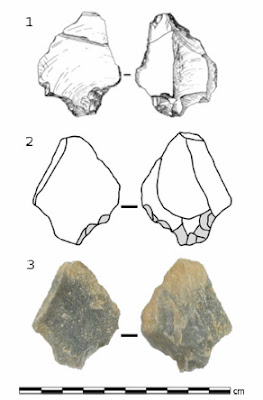 The objects were buried in fluvial deposits (riverbeds) over a long period of time, with sand dune formation between them, suggesting the rivers either meandered or were not a permanent feature. They were apparently found close to where they had been made; all bar one appeared to be made from local rock; quartz, chert and sandstone. The vegetation during the period appears to have been dominated by C4 plants, suggesting an arid, subtropical grassland.