Trying to save the Sinkhole Cycad.

Cycads are an ancient group of Gymnosperm Plants thought to be among the closest surviving relatives of Flowering Plants. They originated in the Palaeozoic, and were once one of the most abundant plant groups on Earth, but were almost wiped out at the end of the Mesozoic, with all Cycads alive today being the result of a post-Cretaceous radiation. There are 331 known living species of Cycads, the majority of which are listed on the International Union for the Conservation of Nature’s Red List of Threatened Species, with more than 75% of known species currently thought to be threatened with extinction.

Cycads are threatened by habitat loss and invasive species (particularly Insects), but are considered to be most at risk due to over-collecting for horticulture. The distinctive evolutionary history of the plants, combined with their attractive appearance and drought tolerance, makes them highly sought after by plant collectors, however they are slow growing and difficult to raise from seed, resulting in a high market value for mature plants, which leads to many being taken from the wild. Four species of Cycad are considered to be extinct in the wild, and it is not thought it will be possible to reintroduce them to their former environments, as Cycads are usually co-dependent on single species of pollinators, typically Weevils, with neither species able to survive in the absence of the other.

In addition to other problems, many Cycad populations are known to suffer from inbreeding depression, a phenomenon which occurs when much of a natural population has been wiped out and most of the surviving members are closely related. Inbreeding depression can lead to health problems as harmful recessive genes become widespread, and typically leads in reduced fertility. In extreme cases this can result in populations with numerous living individuals, which can be observed and recorded by naturalists, but which have no prospect of long-term survival.

In a paper published on the International Journal of Plant Sciences in January 2015, a team of scientists led by Patrick Griffith of the Montgomery Botanical Center in Florida discuss the results of a genetic study of the Sinkhole Cycad, Zamia decumbens, both in the wild and at the Montgomery Botanical Center, where a population of Sinkhole Cycads has been established from wild collected seeds, in order to determine how the Florida population reflects the genetic diversity of the wild population. 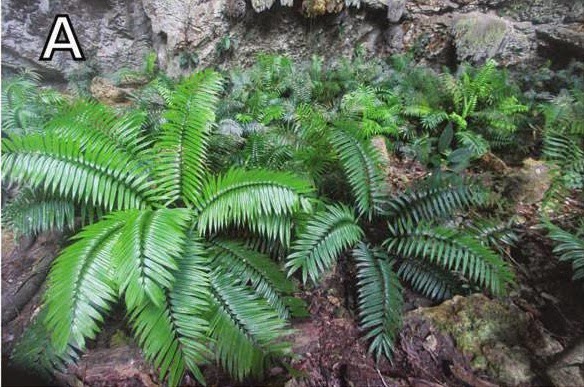 The Sinkhole Cycad was first described in 2009, and has two main wild populations comprising 234 and 183 plants in two limestone sinkholes separated by 7 km in the Maya Mountains in southern Belize, plus a few scattered populations on hilltops in the same area, comprising no more than twelve individuals each. In addition there are 205 plants at the Montgomery Botanical Center, raised from seeds collected at both sinkhole localities. The Sinkhole Cycad is considered to be Critically Endangered under the terms of the International Union for the Conservation of Nature’s Red List of Threatened Species.

The small size of the wild populations meant that it was possible to genetically sample all of the wild plants in the two sinkhole populations, as well as all of the plants at the Montgomery Botanical Center. The plants were analysed for the total number of alleles present in each population (an allele is a gene at a locus where more than one variant can occur, for example humans have a single locus for eye colour, with blue, brown and green eyes being produced by different alleles), in prder to determine the genetic variation within each population, and determine how that of the Montgomery population reflected total variation in the wild population.

The Montgomery population was found to include 77.6% of the total wild genetic variation, including 70.0% of the genetic variation at the first sinkhole and 73.6% of the variation at the second. This is a little disappointing, as similar studies on wild and captive Palms have found a much higher proportion of alleles in smaller captive populations, although it is not altogether unexpected given the biology of Cycads, as not all male plants produce pollen every year, so that seeds collected from different female plants in a small population are more likely to share the same father. It also suggests that the two wild sinkhole populations are genetically distinct, and that plants collected from the two sites should be curated separately.

Based upon this study, Griffith et al. make four recommendations for future projects in which ex situ populations of Cycads (or other plants) are being established to act as a genetic reserve for wild populations. Firstly the collecting strategy should reflect the known biology of the plants. Secondly where plants are collected from more than one population, these plants should be curated separately. Thirdly multiple accessions (collections of seeds from separate mother plants) should be collected and maintained. Finally seeds should be collected on multiple years. 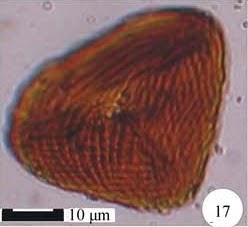 Pollen and Spores from the Early Cretaceous Damoguaihe formation in eastern Mongolia.
The Damouguaihe formation is found in the Hailar Basin in Inner Mongolia, where it has been accessed from a number of coal mines (it never naturally outcrops at the surface). More recently it has also been found in the Tamutsag Basin of Mongolia, where it has been accessed by exploration wells sunk by oil...

A Permian forest preserved in volcanic ash.
Plants are an important part of all terrestrial ecosystems on Earth, and are abundant in the fossil record, but the relationship between plants in ancient environments is often unclear, since most plant fossils represent disarticulated specimens, removed from their...