Utahcaris orion and the origin of the Chelicerates.

Burgess Shale-type faunas are fossil Lagerstätten which provide unique insights into life in the Early-to-Middle Cambrian. The best known examples of these are the highly productive Middle Cambrian Burgess Shale deposits of British Colombia and the Early Cambrian Chengjiang biota of South China, though other less productive sites are also known, such as the Middle Cambrian Spence Shale of northern Utah, which is slightly older than the Burgess Shale and has produced a wide variety of Algae, Sponges, Brachiopods, Eldoniids (soft-bodies animals of uncertain affinities), stem-Molluscs (animals of apparent Moluscan affinities, but which lived or split off from the other Molluscs before the common ancestor of all living groups), Cycloneuralians (the group that includes Kinorynches, Priapulids and Nematodes), Deuterostomes (the group that includes Vertebrates and Echinoderms), Lobopodians (the probable Cambrian ancestors of the Modern Velvet Worms), and a variety of Arthropods, including Trilobites, Carapace-bearing Arthropods (which may be related to the later Crustaceans), Megacheirans (an extinct group of probably predatory Arthropods), Xenopods (an extinct group of soft-bodied Arthropods) and enigmatic forms such as Meristosoma paradoxum and Utahcaris orion.

In a paper published in the Geological Magazine on 31 August 2016, DavidLegg of the Oxford University Museum of Natural History and Steve Pates of the Department of Zoology at the University of Oxford, redescribe the original specimen of Utahcaris orion plus a new specimen and discuss the relationship of this species to other Arthropods, in particular the highly successful Chelicerates (Arachnids, Horseshoe Crabs, their most recent common ancestor and everything descended from it).

The original specimen of Utahcaris orion was discovered by Benjamin Dattilo in Antimony Canyon, and was described by Simon Conway Morris and Richard Robinson in a paper published in TheUniversity of Kansas Paleontological Contributions in 1988. It is preserved as a compression fossil in dorsal view, 87 mm in length. This specimen has a large, subtriangular cephalic shield, plus eleven trunk and two abdominal segments. Remarkably this specimen also shows a section of preserved, phosphatized gut containing the fragmentary remains of a number of Trilobites. 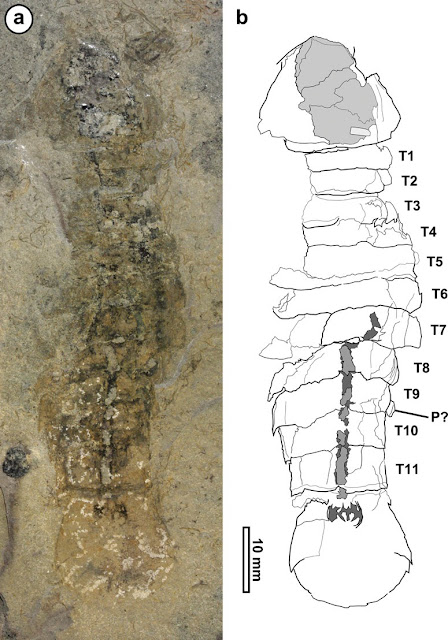 The new specimen was discovered in Miners Hollow by Robert and Nancy Meyers, and is described for the first time, providing new insights into the species and its biology. This specimen is preserved in lateral (side) view, and shows a number of features not visible in the original specimen, notable a compound eye beneath the cephalon and several pairs of elongate flattened limbs. 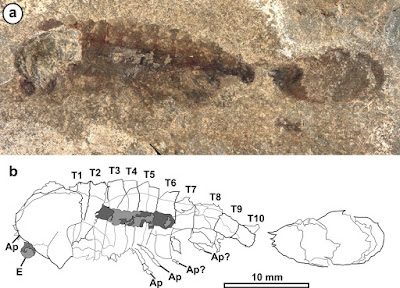 The original study of Utahcaris orion suggested that it might be related to Sanctacaris uncata, a fossil from the Burgess Shale which has been suggested to be the earliest known Chelicerate, as well as to the Leanchoiliid Megacheirans Actaeus, Alalcomenaeus, and Leanchoilia. The new specimen of Utahcaris orion reveals no further similarities to the Leanchoiliid Megacheirans, indicating that the similarities between Utahcaris and this group were a product of the limited nature of the material available rather than any true close biological relationship, however the relationship to Sanctacaris uncata is more strongly supported, and Legg and Pates suggest that these two species, along with Wisangocaris barbarahardyae (a species from the Ema Shale of South Australia to be described in a paper published on 13 May 2016 in the journal Palaeontology by James Jago, Diego Garcia-Bellído and James Gehling) be united as the Family Sanctacarididae, the earliest known Chelicerate group, and that as the Spence Shale is slightly older than the Burgess Shale, Utahcaris orion is therefore the oldest currently know Chelicerate.

The mouthparts of Utahcaris orion are unknown, however the closely related Sanctacaris uncata is known to have robust gnathobases (chewing organs), and the presence of fragmentary Trilobite remains in the gut of the first specimen of Utahcaris orion suggests that it may have had similar structures. This, combined with the presence of limbs apparently modified for swimming, strongly implies that the Chelicerates may have been active predatory animals from the outset, a lifestyle still seen in the majority of living species today. 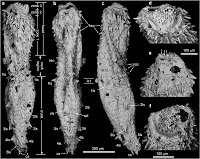