Baboon Spiders, Harpactirinae, are large Mygalomorph Spiders (Tarantulas) found in Africa. They inhabit silk-lined burrows on the ground, from which they ambush prey, and which they will defend aggresively against any percieved threat with a painful venemous bite; this bite is reputed to be so painful that even Baboons will leave these Spiders alone. Members of the genus Ceratogyrus are widespread in Southern Africa, and are given the popular name Horned Baboon Spiders due to a large foveal horn found on the sternum of some species.

In a paper published in the jouranl African Invertebrates on 6 February 2019, John Midgley of the National Geographic Okavango Wilderness Project of the Wild Bird Trust, the Department of NaturalSciences at the KwaZulu-Natal Museum, and the Southern African Forensic Entomology Research Laboratory at Rhodes University, and Ian Engelbrecht of the South African National Biodiversity Institute and the Department of Zoology and Entomology at the University of Pretoria, describe a new species of Ceratogyrus from the Okavango catchment of Angola.

The Okavango wetland system is best known from Botswana, where it has been a major tourist attraction for decades, as well as being home to numerous scientific studies and television documentaries, but the system actually falls across three counries, Botswana, Namibia and Angola, with the majority in Angola. This Angolan part of the Okavango has recieved relatively little outside attention due ro a civil war that statrted shortly after the collapse of the Portuguese colonial empire in 1974, and lasted into the twenty first century. The National Geographic Okavango Wilderness Project has been working in the area since 2015, and aims to study the entire ecosystem across the three nations of the Okavango, and promote conservation in the area.

The new species is named Ceratogyrus attonitifer, which means 'bearer of astonishment' in reference to the surprise invoked by the discovery of this Spider. The species is described from six female specimens, collected from an undisclosed location within Moxico Province, Angola, during a National Geographic Okavango Wilderness Project in 2016. These are 20.8-40.5 mm in length and golden brown in colour, with the foveal horn much larger than seen in any previously seen member of the genus Ceratogyrus, and soft rather than rigid in nature. 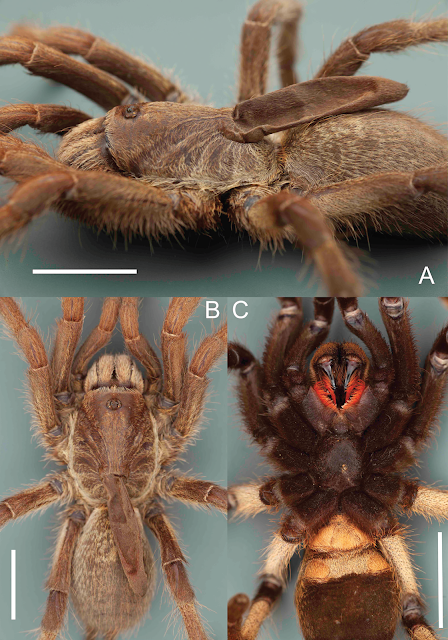 Ceratogyrus attonitifer is found in burrows in sandy soil in open Miombo woodland in southeastern Angola. These burrows are near vertical and about 40 cm deep, with a horizonal section at the base. The burrow has a silk colar with local materials such as twigs or grass incorporated. Any object inserted into the burrow was attacked enthusiastically. The Spiders principally feed on Insects, though local people report that the bites can be  serious, and even potenrially fatal if medical help is not available. 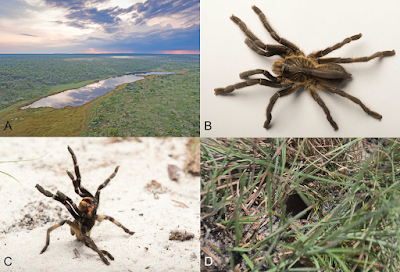 Habitat, burrow and live habitus of Ceratogyrus attonitifer in south-eastern Angola. (A) Aerial view of habitat at the type locality showing a dambo (wetland) amongst Miombo (Brachystegia) woodland. The expedition campsite is to the right of the dambo. Specimens were collected primarily along the margins of the wetland area. (B) Live habitus, dorsal, showing full size of the foveal protuberance in life. (C) Specimen in defensive posture typical for Baboon Spiders; background is white sand at the type locality. (D) Burrow entrance amongst grass tussocks; entrance approximately 2 cm wide. Midgley & Engelbrecht (2019). 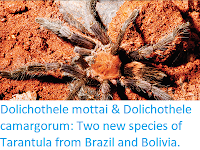 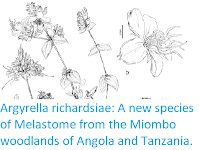 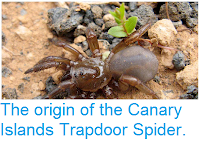 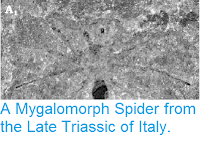 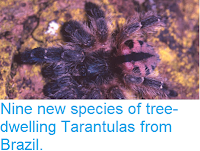