Seven people have been confirmed dead as Cyclone Kenneth swept over parts of the Comoros Islands and northern Mozambique this week. The storm passed to the north of the Comoros Islands on Wednesday 24 April 2019, bringing sustained wind speeds (wind speeds maintained for a minute or more) of up to 140 km per hour and extensive flooding to the island of Anjouan, as well as the northern part of Grande Comore, with local authorities reporting three deaths and a number of injuries. The following day the storm hit the coast of Mozambique, passing over the island of Ibo where it killed two more people and destroyed around 90% of all housing, then hitting mainland coast in Cabo Delgado Province, where it caused two further known fatalities, one in the city of Pemba and one in Macomia District. The storm is reported to have caused four ships to sink off the coast of Mozambique, though all crew members have now been reported safe. 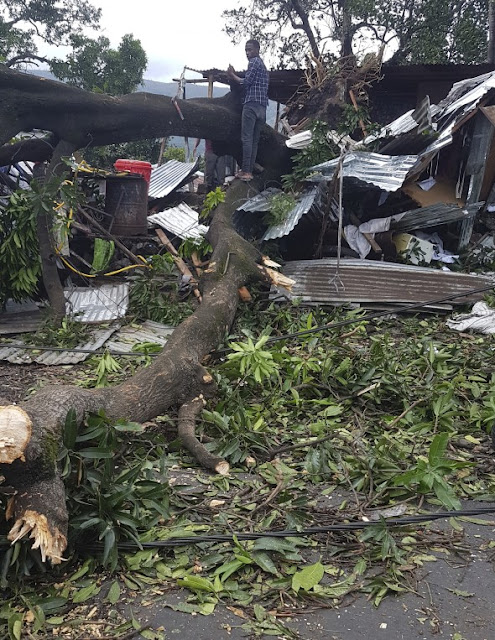 Damage caused by Cyclone Kenneth in Moroni, the capitol of the Comoros, following the passage of Cyclone Kenneth to the north of the Islands this week. Anziza M'Changama/AP.

Cyclone Kenneth hit the coast of Mozambique only weeks after Cyclone Idai, which brought extensive flooding to the south of the country, and caused over 700 deaths in Mozambique, Zimbabwe and Malawi. Kenneth is considered to have been the larger of the two storms, in terms of energy released, which translates into higher winds, more rain and larger storm surges, and indeed is one of the largest storms to hit East Africa since records began, however the region where it made landfall is much less densely populated, so it is unlikely to have caused a similar number of fatalities, though many thousands are thought to have been made homeless by the storm. 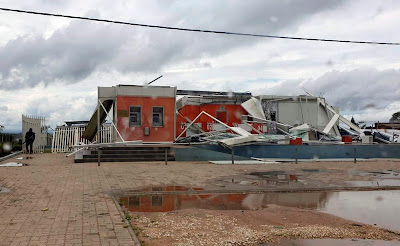 Damage caused by Cyclone Kenneth in the city of Pemba in northern Mozambique. Neidi de Carvalho/UNICEF.

Tropical storms (referred to as Cyclones in the Indian Ocean) are caused by solar energy heating the air above the oceans, which causes the air to rise leading to an inrush of air. If this happens over a large enough area the inrushing air will start to circulate, as the rotation of the Earth causes the winds closer to the equator to move eastwards compared to those further away (the Coriolis Effect). This leads to tropical storms rotating clockwise in the southern hemisphere and anticlockwise in the northern hemisphere.These storms tend to grow in strength as they move across the ocean and lose it as they pass over land (this is not completely true: many tropical storms peter out without reaching land due to wider atmospheric patterns), since the land tends to absorb solar energy while the sea reflects it. 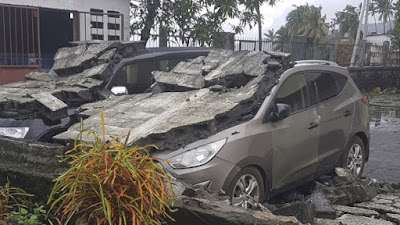 Despite the obvious danger of winds of this speed, which can physically blow people, and other large objects, away as well as damaging buildings and uprooting trees, the real danger from these storms comes from the flooding they bring. Each drop millibar drop in air-pressure leads to an approximate one centimetre rise in sea level, with big tropical storms capable of causing a storm surge of several meters. This is always accompanied by heavy rainfall, since warm air over the ocean leads to evaporation of sea water, which is then carried with the storm. These combined often lead to catastrophic flooding in areas hit by tropical storms. 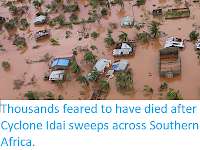 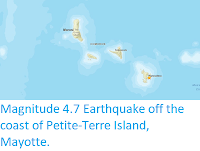 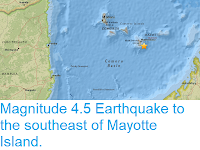