Magnitude 4.5 Earthquake to the southeast of Mayotte Island.

The United States Geological Survey recorded a Magnitude 4.5 Earthquake at a depth of 10.0 km, roughly 20 km to the southeast of Grande-Terre (or Maore) Island in the Mayotte Archipelago, an overseas Department of France in the Mozambique Channel between the Comoros Islands and Madagascar, slightly before 6.30 am local time (slightly before 4.30 am GMT) on Sunday 13 May 2018. There are no reports of any damage or casualties associated with this event, but it was felt across much of Mayotte. 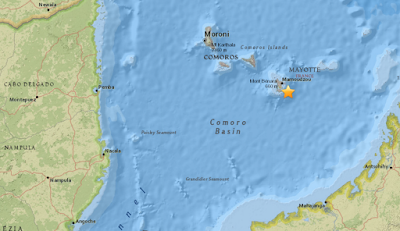 The approximate location of the 13 May 2018 Mayotte Earthquake. USGS.

Geologically Mayotte forms the oldest part of the Comoros Island Chain, which are hotspot volcanoes, located over a magma plume which originated deep in the Earth's mantle which is rising through the overlying African Plate, though they may be connected to the East African Rift Zone, which extends from the Red Sea to the coast of Mozambique, roughly a thousand kilometres southwest of the Comoros. Volcanism is thought to have first started beneath what is now Mayotte about 15 000 years ago, and persisted until about 5000 years ago, with the islands rising above sealevel about 7000 years ago, and continuing to grow after the cessation of volcanism due to the accretion of Coral reefs. Although all volcanic activity on the islands ceased thousands of years ago, the islands are still subject to occasional seismic events (Earthquakes), associated with the movement of magma deep beneath the hotspot. These can be potentially hazardous, due to the nature of the rock which makes up the island, mostly poorly consolidated volcanic ash, which is prone to liquefaction when sufficiently shaken; a Magnitude 5.0 Earthquake in 1993 is thought to have caused about €1.7 million in damage, mostly to privately owned homes. 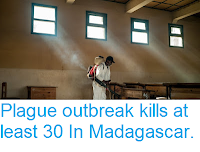 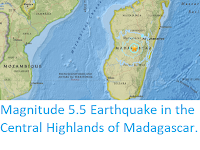