A Magnitude 60. Earthquake occurred at a depth of 50 km, roughly 35 km off the Oshika Peninsula in northeast Honshu Island slightly after 12.30 pm local time (3.30 am GMT) on Sunday 4 August 2013, according to the Japan Meteorological Agency. Although this is a fairly deep quake and a fair way off shore, it was also large and caused some fairly intense shaking on the closest parts of the coast, though there are no reports of any damage or casualties and no tsunami warning has been issued. 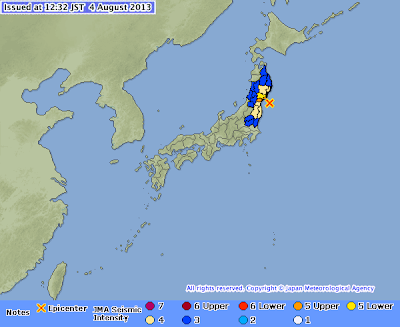 
Japan has a complex tectonic situation, with parts of the country on four different tectonic plates. To the east of northern Honshu lies the Japan Trench, along which the Pacific Plate is being subducted beneath the Okhotsk Plate which underlies northern Japan, passing under the island as it sinks into the Earth. This is not a smooth process, the two plates continuously stuck together then broke apart as the pressure built up, causing Earthquakes in the process.