New species of Placodont from the Middle Triassic of the Netherlands.

Placodonts were a group of Sauropterygian Reptiles (a group related to Snakes and Lizards that includes the better known Pliosaurs and Plesiosaurs which survived to the end of the Mesozoic) from the mid-to late Triassic. They were large animals, ranging one to three meters in length. The Placodonts were Lizard-like in morphology, with cylindrical bodies similar in shape to Marine Iguanas, though unlike the Iguanas they had broad flattened teeth, suggesting that their diet consisted primarily of shelled Molluscs. Some later Placodonts developed bony body armor, presumably as a defense against larger Marine Reptiles.

In a preliminary paper available on the website of the journal Acta Palaeontologica Polonica on 12 April 2013, Nicole Klien of the Steinmann-Institut für Geologie, Mineralogie und Paläontologie at the University of Bonn and Torsten Scheyer of the Paleontological Institute and Museum at the University of Zurich describe a new species of Placodont from the Middle Triassic Lower Muschelkalk of Winterswijk in the eastern Netherlands.

The new species is named Pararcus diepenbroeki, where Pararcus  means 'paired arches', a reference to the structure of the neural arches (structures on the dorsal surface of the vertebrae),  and diepenbroeki honours Gerben Diepenbroek, a Winterswijk fossil collector who discovered the specimen and donated it to the Steinmann-Institute. 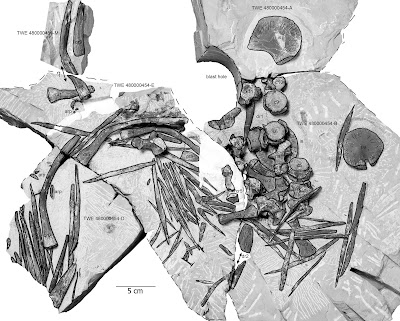 The species is described from a partial disarticulated skeleton from a number of limestone slabs, produced by blasting at the Winterswijk Quarry. The remains include vertebrae and ribs from the posterior trunk and sacral region (base of the spine), two ischia (bottom lobes of the pelvis), one pubis (middle part of the pelvis), hind limb bones, caudal vertebrae and ribs, gastral ribs and armour plates. 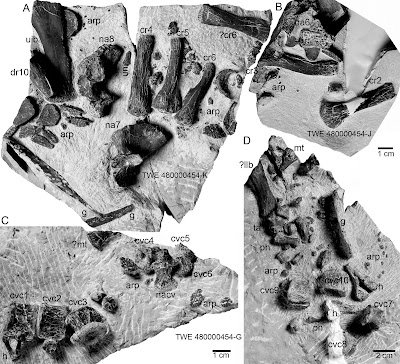 Although it is an incomplete and disarticulated specimen, on the basis of comparison to skeletal elements from similar finds Klien & Scheyer suggest that the living animal was about 135 mm in trunk-vent length (i.e. its length excluding the head and tail). They also suggest that it was not a fully grown animal, as it had unfused neural arches and incompletely ossified margins to the girdle elements. 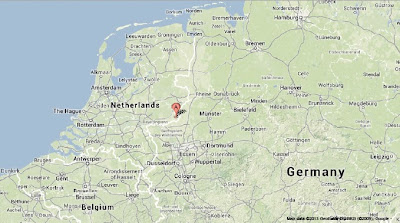 The approximate location of the Winterswijk Quarry. Google Maps.