The floating stones of El Hierro.

When volcanic activity began off the south coast of El Hierro, in the Canary Islands, in October 2010, it led to the production of large plumes of pumice-like rocks that floated on the surface of the ocean, producing a distinctive volcanic 'stain'. Pumice is a volcanic rock which contains large vesicles (sealed, gas filled cavities) which cause it to float on the water, which is formed by superheated magma coming into contact with seawater and is a common product of submarine eruptions. However closer inspection of the floating stones of El Hierro resembled pumice only superficially, being comprised largely of wollastonite (a metamorphicly altered form of limestone) and having quartz sand inclusions. These strange rocks became known as restingolites, after the village of La Restinga, on the southern tip of El Hierro.

In a paper published in the journal Solid Earth on 13 March 2012, a team of scientists led by Valentin Troll of the Department of Earth Sciences at Uppsala University and the Istituto Nazionale di Geofisica e Vulcanologia in Rome develop a theory on the origin of these restingolites. 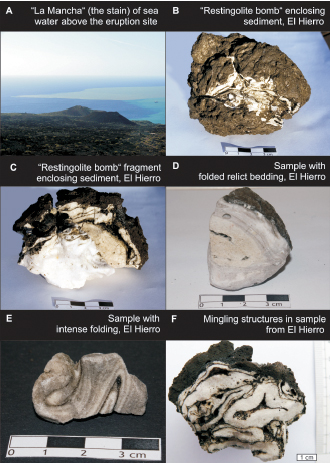 Troll et al. conclude that the floating stones of El Hierro derive not from hot magma, but rather from the metamorphic alteration of sediments on the seafloor as magma welled up around them, heating the sediments and causing a mixture of melting and degassing that produced a pumice-like sedimentary rock, often with a thin crust of true volcanic material, that they refer to as xenopumice, as they are pumice-like in appearance, but xenolithic in origin (i.e. they derive from material alien to the actual magma-flow). They note that similar clasts have been found within volcanically derived sediments at other sites in the Canaries, which suggests that the formation of the El Hierro xenopumice stones was not a unique event, and may be common to the early stages of many submarine eruptions. 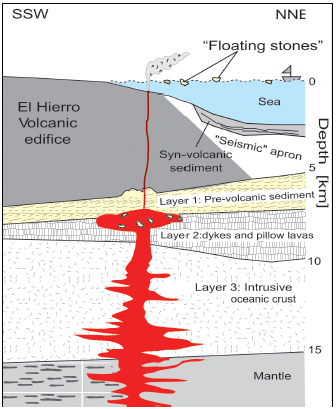 Sketch showing the internal structure of El Hierro Island. Ascending magma is interacting with the pre-volcanic sedimentary rocks, and Troll et al. suggest that the early floating stones found at El Hierro are the products of magma-sediment interaction beneath the volcano. Pre-island sedimentary material was carried to the ocean floor during magma ascent and eruption and melted and vesiculated while immersed in magma to develop a pumice-like texture (xenopumice). Once erupted onto the ocean floor, these xenopumices separated from the host lava and floated on the sea surface due to their high vesicularity (i.e. their low density). Troll et al. (2012).