Asteroid 2014 JE15 passed by the Earth at a distance of 15 810 000 km (over 40 times the average distance between the Earth and the Moon) slightly before 2.30 am on Wednesday 28 May 2014. There was no danger of the asteroid hitting us, and had it done so it would not have presented a serious threat. 2014 JE15 is calculated to have an equivalent diameter of 16-52 m (i.e. a spherical object with the same volume would be 16-52 m in diameter), and an object of this size would be expected to break up in the atmosphere between 26 and 7 km above the Earth's surface, with only fragmentary material reaching the ground. 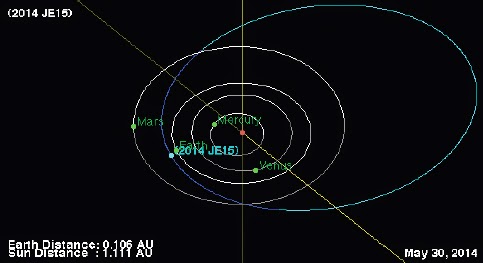 Faye's Comet (Comet 4P/Faye) reached it's perihelion (the closest point in its orbit to the Sun) on 29 May 2014, for the first time in seven-and-a-half years. It presents no danger to the Earth, as it never comes within the orbit of Mars, and was not easily visible on this occasion, as the perihelion occurred on the far side of the Sun. 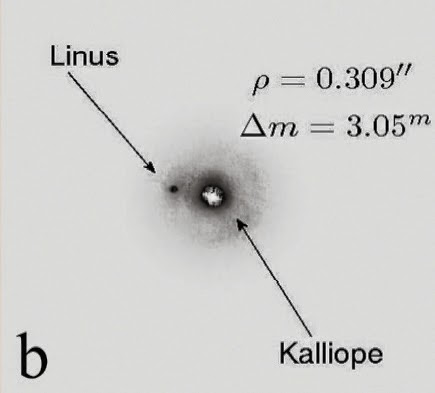 The orbit of Linus.

22 Kalliope is a 166.2 km Main Belt Asteroid with an 1814 day orbit that takes it from 2.62 AU from the Sun (2.62 times the distance at which the Earth orbits the Sun) to 3.20 AU. Unusually, but not exclusively, it has a small Moon, Linus, thought to be about 28 km in diameter. While other asteroids with Moons have been discovered, the positioning of 22 Kaliope within the Main Asteroid Belt makes...