The origin and diversification of Mangroves.

Mangrove ecosystems, in which forests of salt tolerant trees grow between or even bellow the tide lines in tropical and subtropical waters, have been around since the Carboniferous, but modern Mangrove Forests are dominated by Angiosperms (Flowering Plants), particularly members of the Family Rhizophoraceae (although plants from around 20, mostly Angiosperm, families are found in these ecosystems), and are thought to have first appeared in the Late Cretaceous in the Indo-West Pacific Region. Pollen assigned to the genus Rhizophora (the most widespread Mangrove genus) first appears in the Palaeocene of Australia (about 60 million years ago) and in South America and Southeast Asia by the Early Eocene (about 50 million years ago), with the first Mangrove macro-fossils (which confirm genus was morphologically similar to modern species by then, and had presumably adopted the same lifestyle) are known from southern France (about 50 million years old) and the Isle of Sheppey, in the Thames Estuary, southern England (about 45 million years ago).

Most theories on the origin and diversification of the Rhizophoraceae are somewhat dated, and do not take into account modern understanding of genetics or continental drift, and predate the discovery of many of the fossils now available to scientists. Such explanations are based largely on the dispersal of long term propagules by the plants (Mangroves tend are good at this), but are not rally able to explain modern dispersal patterns very well.

In a paper published in the journal BMC Evolutionary Biology on 17 April 2014, Eugenia Lo of the Department of Ecology and Evolutionary Biology at the University of California at Irvine, Norman Duke of Trop WATER at James Cook University and Mei Sun of the School of Biological Sciences at The University of Hong Kong, present a new molecular phylogeny of the genus Rhizophora, which uses molecular dating techniques to determine divergence dates of Mangrove lineages, in order to try to understand the diversification of the family in the light of our current understanding of continental drift and other geological events. 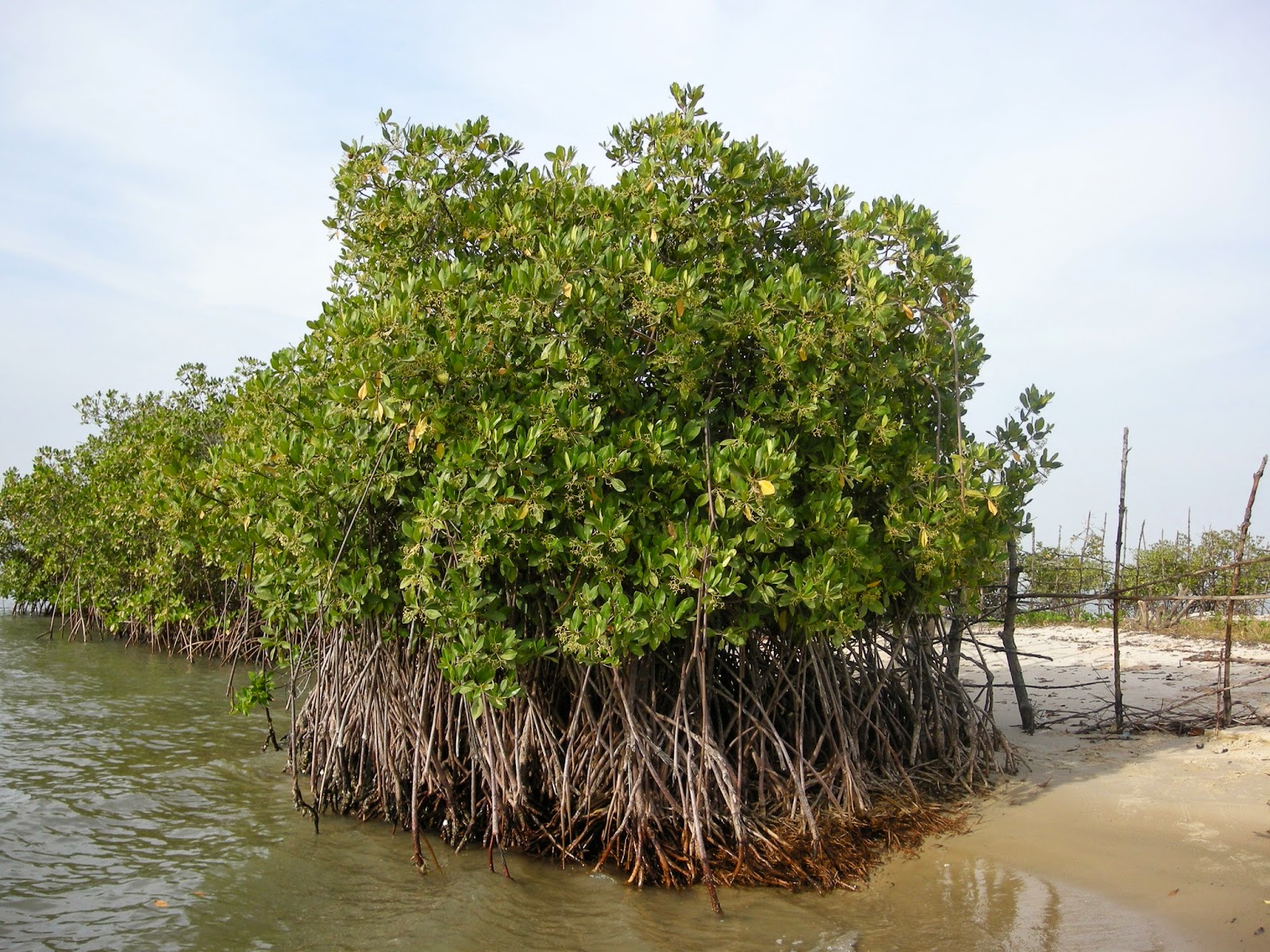 A stand of Mangroves in the Casamance region of Senegal, West Africa. Wikimedia Commons. 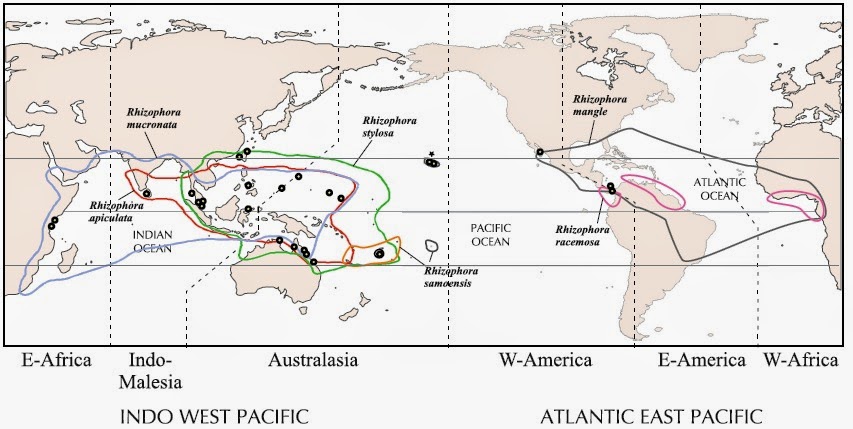 Within the Indo-West Pacific Group Rhizophora apiculata appears to have diverged from Rhizophora mucronata and Rhizophora stylosa in the Eocene, about 38.9 million years ago, while Rhizophora mucronata and Rhizophora stylosa did not appear to be genetically distinct from one-another, with some populations more closely related to populations of the other species than populations of their own. Whether the current species definitions are completely wrong, or whether this is the result of widespread recent hybridization could not be determined from this data, and will be the subject of further study. 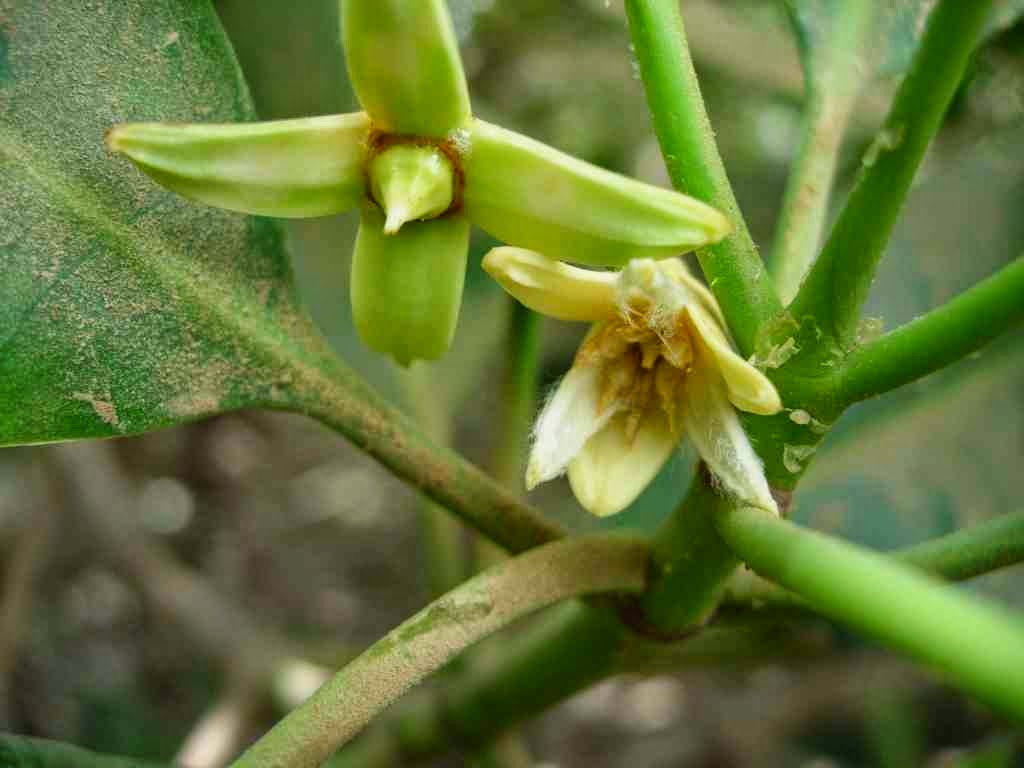 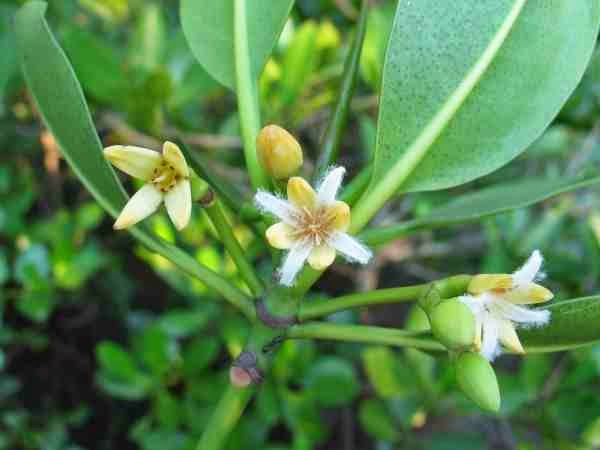 Also within the Indo-West Pacfic Group, a split occurred between Sri Lankand and Southeast Asian members of both species and those of Australia, Kenya, the northwest Pacific islands (Guam and Micronesia) and Subtropical Asia (Japan and Taiwan) 29-24 million years ago (around the Miocene-Oligocene boundary), while Kenyan and Australian lineages of Rhizophora mucronata/Rhizophora stylosa diverged about 6.9 million years ago.

Within the Atlantic-West Pacific Group Atlantic and Pacific American populations of Rhizophora mangle occurred around 4.2 million years ago. 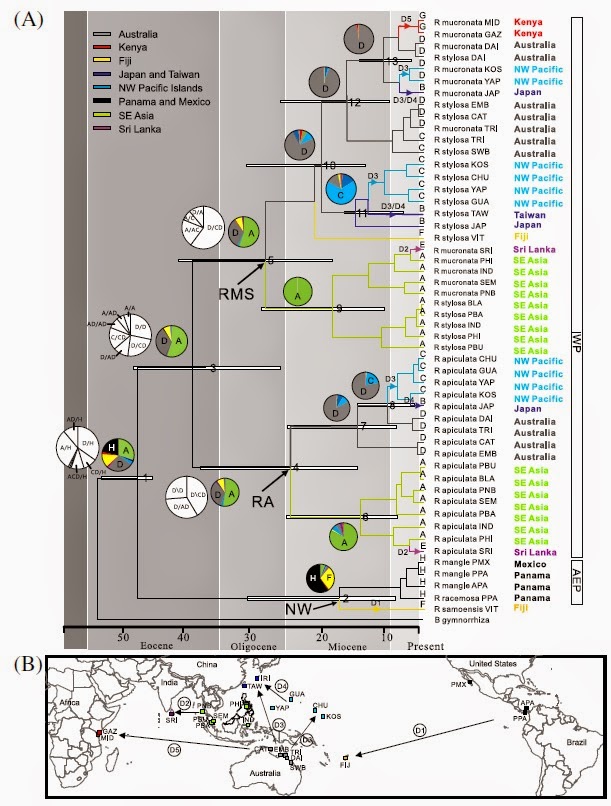 Divergence time and dispersal routes of Rhizophora lineages. (A) Chronogram of Rhizophora based on BEAST analyses of the combined chloroplast and ITS data. White bars indicate confidence interval of the estimated time of divergence of the respective nodes. Pie charts indicate the probable ancestral areas based on Lagrange (black and white) and Mesquite (colour) analyses for the clade of interest. Piechart for nodes are only presented where a variant or dispersal event was detected to identify the possible direction of the dispersal events based on the ancestral area inference. Arrows on branches as D1-D5 indicate potential dispersal events in the map below. (B) Map showing the sampling sites of Rhizophora in the Indo-West and Atlantic-East Pacific included in the present study. Distribution range of each species can be referred to the map above. Colour label indicates the nine distribution areas defined according to past and present separation of major landmasses. Lo et al. (2014).

Lo et al. hypothesize that Rhizophora first appeared somewhere on the shores of the ancient Tethys Sea, from where it dispersed west along the shores of the Arabia and the Mediterranean into the Atlantic, and east into the Pacific. These populations were then cut off by the closure of the Tethys between 50 and 34 million years ago. The Atlantic populations have been further separated by the spreading of the Atlantic (which is still crossable by Mangrove propagules to some extent), while in the east the Australian and Southeast Asian Mangrove populations were separated by the closure of the Indonesian Seaway by changing ocean currents in the Middle Miocene

This fits well with the pollen record of the genus, with Rhizophora pollen being known from the Palaeocene of Australia, the Upper Eocene of Southeast Asia and South America, the Oligocene of Puerto Rico and the Oligo-Miocene of Mexico, while macro-fossils are found in the Eocene of France and England.

Next some members of the Rhizophora mucronata/Rhizophora stylosa grouping dispersed across the Indian Ocean from Southeast Asia to Sri Lanka, probably in the Late Miocene, when the Indian Subcontinent was at its closest to Southeast Asia. Also during the Miocene some members of both the ancestors of Rhizophora apiculata and Rhizophora mucronata/Rhizophora stylosa dispersed from Australia to the Western Pacific Islands (Guam and Micronesia), as the collision between the Australain and Pacific Plates raised chains of volcanic islands along their border (not all of which remain above the surface); eventually descendants of these West Pacific Island Mangroves dispersed northward to Taiwan and Japan.

Finally Some members of the Rhizophora mucronata/Rhizophora stylosa grouping dispersed across the Indian Ocean from Australia to East Africa; a dispersal route now thought to be closed due to the northward movement of cold waters from the Antarctic, which are hostile to Mangrove propagules.

A new species of Leaf-spot Fungus from Fish Poison Trees in Thailand.

Leaf-spot infections are among the most common diseases in plants, and are caused by a wide variety of fungi. Though unsightly, few of...


A major spill has been reported in the Nembe Kingdom area of Bayelsa State, Nigeria, with oil covering mangrove swamps, rivers and commercial waterways. The spillage appears to have originated... 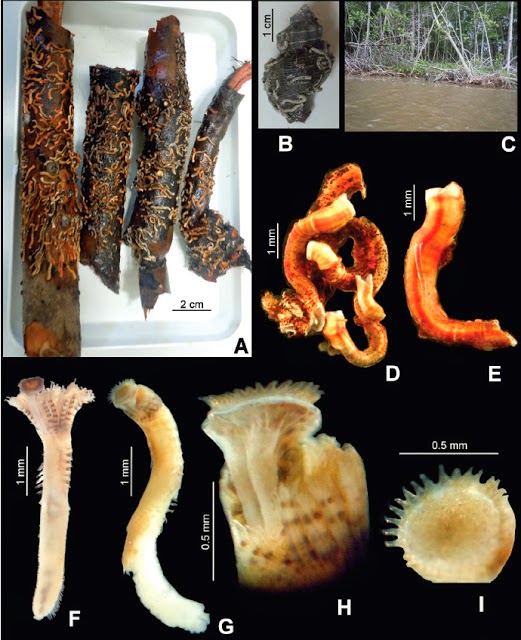